A pair of inspired performances from Russell Crowe and Christian Bale make 3:10 to Yuma worth catching. 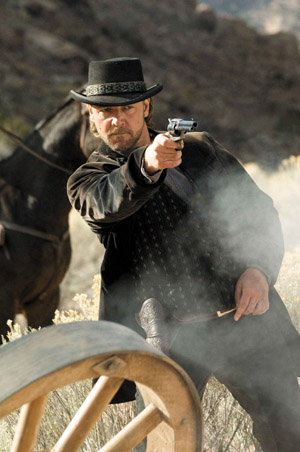 The flicker of firelight plays off the drawn faces of a handful of weary, wary men. Out in the darkness, beyond their ragtag ring of flame, are coyotes and Apaches and a band of very bad brothers-in-arms coming their way with speed and deadly spite. And yet the greatest danger to the makeshift posse lies not out there in the uncertain night. Their deepest source of peril sits just across the campfire, in the snake-charmer smile and manipulative muscle of the shackled man named Ben Wade (Russell Crowe). He's the one in cuffs, and yet he's the one in control.

A messianic bandit ' the thief and murderer calls his sidearm "The Hand of God" and his second-in-command bows and scrapes his strange obeisance at every turn ' Wade has long bedeviled the Pinkerton men (the grizzled, endearingly Duke-like Peter Fonda foremost among them) and Southern Pacific Railroad agents whose job it is to safely ferry the company's profits from lonely outposts to city centers. Bedeviled them to the tune of 20-plus hold-ups and Lord knows how much money. Bedeviled them, that is, until just a day or two ago, when Wade was undone by a combination of his own lust and another man's canny desperation.

If Wade hadn't stayed in town after robbing a stagecoach to bed a redhead saloon girl, he'd have disappeared over the dusty border to Mexico with time to spare. But down-on-his-luck rancher Dan Evans (Christian Bale) stumbled into the saloon on a mission to save his hopelessly dying ranch at just the moment that the sheriff and his men were descending on Wade; the eagle-eyed failure of a farmer delays Wade just long enough, and that's how the wanted man winds up wearing metal bracelets on his deadly way to a place called Contention to catch the 3:10 to Yuma.

In his revisitation of the 1957 movie that starred Glenn Ford and was based on an Elmore Leonard short story, director James Mangold (Walk the Line) reminds us that the Western functions best as an art form when its moralities are left in play. The greatest Westerns ever made ' The Good, the Bad and the Ugly; The Searchers; Unforgiven; HBO's dearly departed Deadwood ' discard black-hat-white-hat simplicities and revel in the nasty realities of life on a largely lawless frontier. Or maybe they are just the nasty realities of life, period. There's something spare and lean and poetic about these kinds of Westerns, universal truths about ethics and choices and character scattered among all of the gunplay and bravado.

That's the kind of transcendence to which Yuma aspires, focused as it is on the titanic battle of wills between Wade and Evans, but Mangold's movie doesn't quite reach the extremes that he seeks. For one thing, somehow the look of the film is too shiny, the explosions of violence occasionally too 21st-century. The rugged country serves as a beautiful backdrop, but the towns and interior settings simply lack the dirt and depth of authenticity, even the wonderfully named destination city of Contention.

Mangold knows an iconic shot when he sees one, and the film is full of them. But how many close-ups must we see of hatted men staring down, only to slowly raise their eyes to camera level, the shadows of their brims giving way to gritty stares? The first few are breathtaking. After a while, not so much. The script ' screenwriters Michael Brandt and Derek Haas tinkering with Halsted Welles' original adaptation ' experiences a bit of a lull in the midsection, more a pacing problem than any story deficiency.

But little else really matters, in truth, when Crowe and Bale are on the scene. The contours of the character of Ben Wade fit Russell Crowe like a second skin. Few would be capable of so convincingly shifting from silver-tongued amiability to chilling rage and back again. Crowe's Wade is a subtle chameleon, slyly sizing up the people around him with sharp eyes, probing until he finds their weakest spots, ever ready to strike. Bale's quietly desperate determination ' first for money, then for respect ' serves as an intense foil to the chaos of Wade's unpredictability. As the two dance between hate and some strange affinity, they think and speak and fight like they complicated men that they are. And that is precisely how this particular Western is won.