Robert DeNiro's The Good Shepherd contains as many complexities as the shadowy government agency it seeks to illuminate. 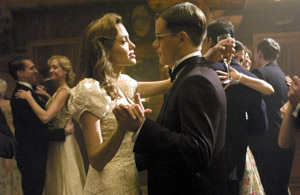 No matter what yesteryear's catchy movie title says, spies are never like us. They simply can't be.

In the popular imagination, espionage is exotic and explosive, its practitioners on par with pirates and superheroes. But in the world of The Good Shepherd, spies are not set apart by some romantic lifestyles-of-the-rich-and-famous fantasy existence.

Instead, it's their singular devotion to lives of quiet desperation that keeps them in this world, but not of it. They are pencil pushers who play a most morally, if not physically, dangerous game. In The Good Shepherd, the cold isn't something a spy can ever come in from because, after all the secrets and lies, the cold is all a spy has honestly got.

For years, Academy Award-winning actor and sometime director Robert DeNiro has wanted to make this film, a dark and intelligent imagining of the birth of the Central Intelligence Agency. It was worth the wait.

Scripted with subtlety, delicacy and a refreshing strangeness by Eric Roth (Munich, The Insider), Shepherd follows the story of Edward Wilson (Matt Damon) from a privileged childhood marred by tragedy through his Yale years to his eventual assimilation into the shadow world of counterintelligence that would eventually become the CIA. Along the way ' through coups and crises and the catastrophic Bay of Pigs ' Wilson acquires a boozily unhappy wife (Angelina Jolie), a stranger of a son (Eddie Redmayne) and a dossier of colleagues who may or may not be trustworthy.

A buttoned-up bureaucrat of a man, Wilson lets very little in ' and even less out. Damon does a remarkable job of revealing nothing and everything at the same time. He makes his blankness a vast and deep vein, his ambiguity in every way as interesting as the more nuanced portrayals that surround him (including wonderful moments from such greats as Michael Gambon, William Hurt and Alec Baldwin). Taken together with the latent brutality of his compromised cop in Martin Scorsese's The Departed, Shepherd shows that Damon is just an acting Oscar waiting to happen.

Framed with admirable artistry by DeNiro and shot by the incomparable, breathtakingly unerring Robert Richardson (JFK, Kill Bill), The Good Shepherd is one of the best movies of the year. It's far from formulaic; Roth's elliptical writing style paired with Damon's restrained acting might leave casual viewers dissatisfied. But Shepherd is a serious, skillful effort to illuminate the shadows that define any credible intelligence-gathering undertaking. In a world where definitions of good and evil are increasingly narrowed, this is one narrative that still sees shades of gray.

One of the very best things about Night at the Museum might have been star Ben Stiller's pre-release appearance on The Daily Show With Jon Stewart.

Watching two of Hollywood's hipper funny men turn into giddy little boys extolling the labyrinthine wonder of New York's American Museum of Natural History had a charm all its own. Like much cooler versions of Friends' pontificating paleontologist Ross Geller, Stiller and Stewart seemed ready to leave the desk right then and there to head over to Central Park West posthaste. History and museum lovers the late-night world over sighed the happiest of sighs, pleasantly surprised to find kindred spirits outing themselves in the unlikely arena of late-night talk TV.

Still even more astonishing, though, are the kindred spirits behind the hit holiday film that Stiller and Stewart were (sort of) discussing. Who knew the Reno 911 guys were capable of making a family film that gives heart, head and humor equal attention? Night at the Museum screenwriters Ben Garant and Thomas Lennon (both of whom write for and appear in the Comedy Central series about Las Vegas' not-so-top cops) ably adapt Milan Trenc's children's book about a night watchman, down-and-out Larry Daley (Ben Stiller), who watches in disbelief as the museum pieces he guards come to life when the sun goes down. The three old-timers who hired him ' Dick Van Dyke, Mickey Rooney, Bill Cobbs ' somehow left that part out of the job interview.

Suddenly, among other historical excesses, Larry's juggling a T Rex who loves to play fetch, a band of marauding Huns, fire-happy cavemen, a crafty Capuchin monkey named Dexter, a budding romance between the wax mannequins of Sacajawea (Mizuo Peck) and Teddy Roosevelt (a sweet and understated Robin Williams), and a mini-war in the diorama room between tiny cowboy Jedediah (Owen Wilson) and his pint-size, next-door-neighbor Roman emperor Octavius (Steve Coogan). By the end of his first shift, Larry ' Stiller at his most ebulliently exasperated ' learns that those who don't know their history are doomed to clean up after it, night after night. A perennial dreamer, Larry is tempted to walk away from this exploded textbook of a job, but he's kept in place by the stability his position affords his young son (Jake Cherry) and the encouraging aphorisms of wax Teddy.

Helmed by director Shawn Levy (Cheaper By the Dozen), Night at the Museum is a wonderfully wacky cavalcade of history, silly fun for youngsters sprinkled with knowing in-jokes for the youngsters-at-heart who are lucky enough to accompany them.