'Hide and Seek' never quite finds its way. 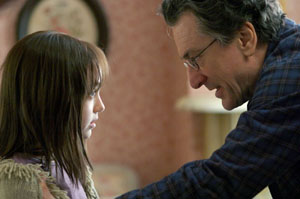 Note to all aspiring/current horror/suspense writer/directors: The next Sixth Sense will have to be more than just a Sixth Sense knock-off. Seamless originality propelled M. Night Shyamalan's thriller to success, not adherence to someone else's notions of what a scary movie ought to be. Could Shyamalan have known that in daring to be so spectacularly different he was unwittingly becoming the new template? Filmmakers soon began rediscovering the complicated psychology of suspense, but if imitation is the sincerest form of flattery, it can also be the shortest shortcut to snoozeville. The young director who started it all has made several interesting films since (Signs, The Village), but not even Shyamalan himself has been able to recreate The Sixth Sense's own particular kind of magic: that glorious reveal that no one sees coming. So, really, what chance does a B-team effort like Hide and Seek have?

The movie has a decent premise. The Callaways are the very picture of a loving family living the city life. Mom Alison (Amy Irving) and dad David (Robert DeNiro) go to fancy dress-up parties on New Year's Eve, but are sure to come home early enough to lovingly tuck adorable young Emily (Dakota Fanning) into bed. Like most pictures of loving families, however, another, darker truth lies beneath ' David awakes one morning at 2:06 a.m. to discover Alison floating in a candlelit bathtub of bloody water, her wrists slit. The camera pans over his shoulders shaking with sobs to reveal a wide-eyed Emily standing in the doorway in her baby-blue cloud pajamas.

David, a psychologist (but ultimately not a very good one), decides that he and the now extremely troubled Emily need a change of scenery to help them forget, so he buys an enormous old house in the godforsaken middle of upstate New York. Shortly after moving in and meeting their creepy new neighbor caricatures, Emily starts to talk about her new friend, Charlie. Early on, David decides that Charlie is a figment of Emily's disturbed imagination, a coping mechanism sprung from a traumatized brain. But, oh my, the things this "coping mechanism" is capable of doing in that lonely, creaking house. It's 2:06 in the morning; do you know why golden light is streaming from behind your bathroom door?

Soon, however, the long series of horror movie cliches begins. Cats screeching out of closets are scary; dolls, especially mutilated ones, are frightening; neighbors are bad; law enforcement officers are ineffectual. Could a good-looking divorcee acquaintance serve little more purpose than as an upright corpse-in-the-making? As if this litany of narrative laziness isn't enough, first-time screenwriter Ari Schlossberg then tries to pump up the volume with a showy reveal about this pesky Charlie person that ends up as not all that showy and not the least bit revelatory.

The biggest problem with Hide and Seek, in fact, is that, at one hour and 45 minutes, it's too darned long ' there's way too much time to think about Charlie in the first third of the movie, and thinking inevitably leads to a little thing called figuring out what's going to happen. In The Sixth Sense, Shyamalan smartly kept audiences in a constant state of visual misdirection, his first film a cinematic trompe l'oeil that prevented the obvious from ever presenting itself front and center. Schlossberg and director John Polson (Swimfan) seem to be more of the hold-your-breath-and-hope-no-one-is-thinking-too-much school of filmmaking. The film isn't the worst scary movie ever (as if it could be), but it's not terribly clever, either. And so the plot twist comes and goes rather uneventfully, as the movie devolves into a ridiculously prolonged ending that would be laughable if it weren't so painful to watch.

Still, even if the story holds up about as well as a hysterical woman with a chance to get the killer before the killer gets her (which is to say not at all), the film is largely well-shot. Polson knows how to move his camera to create a sense of unease and claustrophobia; cinematographer Dariusz Wolski (The Mexican) consistently creates a gloomily beautiful palette. And just because so many of the movie's moments are genre cliches doesn't mean a few of them still aren't hair-raising (think Psycho surprises behind a filmy shower curtain and not-quite-dead people in dark basements).

By taking roles in throw-away movies like these ' and shamelessly overacting when he does ' Robert DeNiro is becoming increasingly impossible to take seriously any more, but the 10-year-old Fanning just about out-Osments Haley Joel Osment, giving the film's most remarkably nuanced performance, Dorothy Gale one moment and Damien the next. At times, you won't believe the words this talented little waif is asked to utter, the deeds she is asked to commit ' except you'll have to because her talent is as deep as her big blue eyes. Steven Spielberg thought that coming up with ways to make Drew Barrymore cry in E.T. bordered on child abuse. Can't help but wonder what he might think of Hide and Seek.