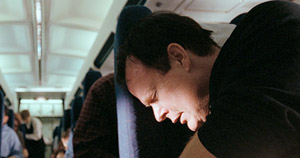 It's eerie to sit in a theater waiting for the lights to go down, knowing that what will follow will be a suffocating flashback to a day we all wish we could forget. We'll never be able to forget, though, and we shouldn't; the dark events of that day should always be as real and as horrifying as they were that clear blue morning. A morning before things weren't normal any more, before a seemingly never-ending national wake of news coverage began and before lofty rhetoric politics stormed center stage. A morning when 9/11 was not yet a cultural reference. When it was still just a day, and none of us really understood. Perhaps that's the very best thing about director Paul Greengrass' experimental United 93 ' the fact that he tries so valiantly to bring us all back to the very moment when unfocused fear became terrible knowledge.

It's also rather disconcerting to sit through a slate of previews for this summer's blow-em-up spectacles and cutesy-pie romantic comedies, knowing that what will follow will be a most intimate tragedy, a real-life horror film like few (maybe none) before. Perhaps that's what is second best about Greengrass' film ' its single-minded, stripped-down seriousness. There are fleeting moments when United 93 speaks in a cinematic whisper, its quiet shocks of recognition as electric as they are eloquent.

How disappointing, then, that United 93 isn't a completely successful film. It's an artistically ambitious film and in some ways even a brave one, taking the too-soon, too-raw, too-speculative criticisms with steadfast earnestness and simple resolve. As it tells the story of the fourth hijacked plane, the one that eventually crashed into the lonely Pennsylvania field after its passengers rose up against their captors, there are some things that United 93 does very, very well. It masterfully and understatedly handles the technical presentation of the Twin Towers and Pentagon crashes, and its last 30 to 45 minutes are as gripping and immediate as any work of visual fiction can be. But then, there are other things.

There's been an awful lot of discussion about the casting of this film, mostly filmmakers taking pride in an ensemble of no-names. It seemed a smart ' and tasteful ' move to remove the distraction of any widely known faces and names. But after so much talk, it's that much more jarring to spot Faye (Rebecca Schull) from the TV sitcom Wings or David Rasche from the '80s small-screen cult classic Sledge Hammer! Anyone who's ever watched Law & Order has seen most of these faces at least once, not to mention a Broadway actor (Chip Zien), a soap star of yesterday (Tom O'Rourke) and a recent bit player from Boston Legal (Christian Clemenson). Still, this odd aggregate familiarity is not the cast's greatest flaw; that would be their acting.

Greengrass' script, at times, has a heavy improvisational vibe to it, understandable because he is essentially attempting to recreate the unknowable. But early on, his efforts strand his performers. Consequently, in important early scenes, the inconvenient feeling arises that this is all about to happen not to real people just like you and me, but to bad actors who see what's coming and are trying to feign nonchalance. The result is not true improvisation, which simulates reality at its most natural and organic, but faux improvisation, which can be stilted and uncomfortable and more fake than any scripted exchange. Would a high-powered, high-talent cast have been any worse? Perhaps not. Perhaps stars with the depth to match their big names could make the audience care as much as we know we should in the film's early scenes.

And we do want to care. It feels wrong to criticize this film, however lightly, and ' notably ' hardly anyone is. But the truth is that, no matter Greengrass' diligent and respectful desire to do no disservice to either history or myth, United 93's power and poignancy come from the aura and horror that envelops 9/11 and not from anything he manages to put on screen. Or anything he dramatizes, to be more accurate. His unflinching use of footage of the second plane barreling into the second tower is the film's truest shot. Everything else feels too small, seems not enough, no matter the crafted chaos of his handheld camera or the palpable sorrow and anger of the flight's final moments.

That makes United 93 a strange and difficult film, somewhere between good and just OK. But with an event this big and wounds this fresh, maybe just OK is the very best we could hope for.