Comedy gold medalists Will Ferrell and Jon Heder pair up for figure-skating spoof Blades of Glory. 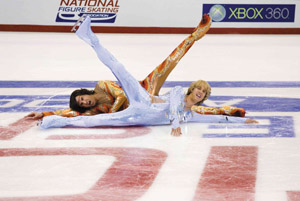 Stupid humor works best when it's based on something smart. Will Ferrell knows this in his crazy bones. Juvenile and silly without that all-important hint of underlying intelligence breeds any number of pet detective movies, exercises in extremes which are simply stupid jokes told with studied stupidity. There's humor there, yet no transcendence. But ah, the comedic nirvana of a stupid joke smartly delivered. Welcome to Will Ferrell's world. If you crave a little dose of depth in your dumbness, then you're going to be very, very happy here.

Ferrell has made a name for himself by being clueless. Not just by playing clueless with a wink and a nod, but by actually somehow embodying it, whether as a sweet-souled North Pole exile or as a chauvinistic, empty-headed San Diego news celebrity. His bewilderment is always beautifully delivered, so wonderfully all-encompassing that the intelligence and craft behind it can't help but subtly shine through. It's the difference between being a Jim Carrey and being a Peter Sellers, between being a clown and becoming a clown prince.

When a comedian can walk that fine line, quotable classics like Anchorman and Talladega Nights are created. And even slightly lesser efforts like Blades of Glory still skate to enough mojo moments to make the hour-and-a-half investment worthwhile.

Blades of Glory, written by newcomers Jeff and Craig Cox with the delightfully named actress Busy Philipps (Dawson's Creek) and assists from King of the Hill's Jon Altschuler and Dave Krinsky, is essentially based on the insight that figure-skating is funny and that men's figure-skating is funnier. But thankfully, Blades doesn't just zero in on the obvious, like the eccentric athletes and the Vegas wardrobes. Oh, it lets them have it something good, but the movie's ridicule also goes after the operatic, nonsense commentary and the cheesy television sports profiles (right down to bubble-filled, neon-lit portrait shots) and even the odd mascots and costumes of a world sports celebration. And that's just the setting.

Blades introduces its professional-athlete protagonists as though the movie audience is watching an episode of Wide World of Sports. We experience a peacock performance from golden-curled golden boy Jimmy MacElroy (Jon Heder) and are filled in on his orphan-to-Olympics backstory; bad boy Chazz Michael Michaels (Will Ferrell) follows with a sexed-up free skate, accompanied by his own preening personal profile. The two rivals tie in this particular competition and are forced to share the gold medal. Their jockeying for position on the podium creates chaos, a fistfight leading to the accidental immolation of the event's furry mascot and a lifetime ban from the sport for both.

After embarrassing interludes in the real world ' MacElroy sells skates to spoiled brats and stocks shelves, a drunken Michaels headlines a kids fairy-tale show called Grublets on Ice ' the former competitors discover a loophole. They can compete again, just not as singles. With no time to find female partners before the next big competition, the two are reluctantly convinced to skate together. And so the history-making, hilarious pairing of MacElroy and Michaels is born. Can they overcome their personal animosities and issues to work together? Can they legitimately compete against pairs paragons Stranz and Fairchild Van Waldenberg (real-life husband-and-wife team Will Arnett and Amy Poehler doing their outrageously evil best)? Can this scenario possibly stay funny for more than 15 minutes?

The answer to all is, of course, yes. Heder may never completely shake his Napoleon Dynamite persona, but his naïve, sappy-sweet Jimmy rolls along quite ably with his frenetic costar, receiving many laughs if genuinely creating only a few. Poehler and particularly Arnett (Arrested Development) are underused; Poehler sneers her way through her ice-princess persona, while Arnett perfectly deadpans her evil-non-genius brother. But the film is all Ferrell's, as so often happens when he unleashes his intense inanity.

Like Ron Burgundy and Ricky Bobby before him, Chazz Michaels is ignorant, belligerent and occasionally grotesque. He's arrogant, confrontational and kind of disgusting. And yet, he's infinitely likeable because Ferrell plays him so that he doesn't know how awful he is, and that makes his awfulness quite frequently more hilarious. Ferrell could do this character in his sleep these days, but much like the stupid/smart yin and yang of Mike Myers' Austin Powers/Dr. Evil shtick, it has yet to grow old.

The script of Blades of Glory is thinner than that of Anchorman or Talladega Nights, but ultimately, that doesn't matter much because Blades manages to be just plain fun. In skate speak, that means flawed technique, but perfect presentation. A real crowd-pleaser.