The funny guys behind the zombie comedy Shaun of the Dead take on buddy-cop movies in Hot Fuzz. 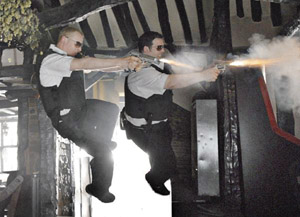 Sandford is a perfect postcard of a place. Rolling English countryside on all sides, quaint village houses and shops, residents who are entirely friendly if somewhat small-town sleepy. A massive cathedral overlooks a cozy inn, a greenery-laden police station, a picturesque castle just outside town. The streets are clean, the flowers are in bloom and all's right with the world. So perfect is Sandford that it continually wins the civic honor of Village of the Year, a fact which its populace notes with great pride. After all, who wouldn't want to live in such a storybook setting?

London supercop Nicholas Angel (Simon Pegg), for starters. The just-the-facts, letter-of-the-law Angel is so proficient at his London crimefighting job that the bad guys fear him ' and the rest of the good guys loathe him. Fed up with Angel's largely unintentional oneupsmanship, his superiors ship him off to slow-paced Sandford under the guise of a promotion to sergeant and accompanied by the enthusiastic applause of his so-called peers, who are only too happy to see him go. Unhappy but too much of a company man to quit, Angel grabs his one constant companion, a Japanese peace lily plant, says goodbye to his one-time girlfriend Jeanine (a crime-scene-masked, uncredited Cate Blanchett) and heads out for the hinterlands. Once on the train, the bars on his cellphone and Angel's increasingly hang-dog expression drop in unison with relentless predictability.

Still, the man's got a job to do, and before he's even officially on duty, he's collaring criminals left and right, mostly underage drinkers and public drunks, the latter including the new partner he just doesn't know yet, Danny Butterman (Nick Frost). Danny is the sweet, bumbling son of Sandford chief inspector Frank (Jim Broadbent). In his first official day on the job, Angel discovers that the Sandford cops don't so much fight crime as eat cake.

With barely repressed irritation, Angel goes about acclimating to small-time law enforcement, enduring Danny's ceaseless cop-movie-inspired chatter and humoring the Neighborhood Watch Alliance, a group of aging busybodies whose biggest bugaboo seems to be the metallically painted "living statue" that frequently sets up shop in the town square. In between chasing errant swans and setting up speed traps, Angel meets the locals, including smarmy supermarket manager Simon Skinner (former James Bond Timothy Dalton) and the village's man of the cloth, the Rev. Philip Shooter (former Indiana Jones nemesis Paul Freeman). He even starts to make friends with Danny, eschewing his regular cranberry juices for an evening full of pints at the Sandford pub.

And then, slowly but mercifully, a series of mysterious deaths starts to liven things up in Sandford. Decapitated thespians, an exploding house, a pesky reporter spectacularly silenced by a chunk of churchyard stone ' Angel seems to be the only one who sees hints of the devil's handiwork. The unfazed residents of Sandford are all too ready to write off the occurrences as accidents. Is it that Angel just can't turn off his big-city suspicions? Or is something sinister happening in Sandford? Seeing as how Hot Fuzz was put together by the same team who created the 2004 indie hit Shaun of the Dead, it's not hard to figure out which one it is. Shaun was a loving, laughing tribute to the zombie movies of George A. Romero, as slyly smart as it was flesh-eatingly funny. Hot Fuzz tackles a much broader genre, the action-adventure buddy-cop movie. The film, funny in its own right, does labor a bit under the weight of its cult-classic older sibling.

Director Edgar Wright and his co-writer and star Pegg know their material, namechecking and judiciously borrowing from a truly ridiculous array of blockbusters, everything from Point Break and Bad Boys to Lethal Weapon and Kindergarten Cop. For good measure, they throw in quick winks to a few non-genre flicks like The Omen and Godzilla. It's a film lover's free-for-all, mortared together by two heroes you can't help but love and a sprinkling of snortworthy one-liners.

The set-up of the film does seem overly long. There are too many people to meet and too many scenes to set; it starts to get tedious, even if Wright's inventive, jumpy direction tries to keep things moving. Like cinematic Santas, however, Wright and Pegg provide the ultimate pay-off for the slow parts. No one we meet and nothing we see is forgotten in the script; everything plays its part eventually, which delivers that rare sense of screenwritten satisfaction to go with the inevitable shoot-outs and explosions. Like Shaun before it, Hot Fuzz takes homage to new heights; this time, there's just a couple of ginormous fireballs fueling the fun.