American FBI agents take on a bomber cell in The Kingdom, as director Peter Berg tackles the war on terror. 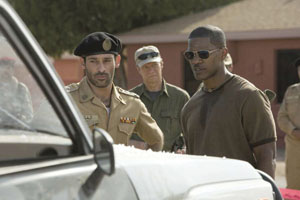 Director Peter Berg signals early on that he intends The Kingdom to be something more than just a souped-up, summer-holdover action movie that happens to deal with the topic of terrorism. His title sequence sets the target tone with its mash-up of news footage, computer graphics and the terse dates, facts and figures that have led to the present-day philosophical pretzel that is American involvement in the Middle East.

It's an incredibly well-executed modern-day March of Time news reel, a kind of run-up to the war on terror for dummies. Historical highlights are placed in a timeline, links succinctly forged, as each of the major players is placed on the slowly emerging chess board of geopolitics. The sequence, all about oil and access, strives to place Berg's film outside the realm of the usual shoot-em-up flick it will at times soon resemble, an effect that ' like the film itself ' is arresting, provocative and ultimately of uncertain, unsettled value.

A terrorist attack in a compound community of oil-company employees and their families just outside Riyadh, Saudi Arabia, might not chronologically be the film's first scene, but it is primary in all other ways. Dads barbecue on grills while ponytailed little girls clumsily play catch nearby. An organized softball game is the centerpiece of the afternoon, good-natured trash-talking and family-led cheers mingling in the shimmering heat. Suddenly, shots shatter the day's festivities. Two men in Saudi police uniforms steal a truck and race through the neighborhood streets, their automatic weapons mowing down pedestrians and piercing the walls and windows of homes. As chaos ensues at the softball diamond, a third uniformed cop offers direction, urging frightened people past him, waiting for the optimum moment to detonate his suicide vest.

A group of Saudi boys and men videotape the unfolding events from an apartment building that overlooks the oil-company compound, coldly celebrating their awful handiwork. And yet the day's horror is far from over. As first responders and law enforcement flood the scene, tending to the sick and wounded, a massive explosion erupts, displacing vehicles and disintegrating the souls within its blast range.

In Washington, D.C., FBI agents Ronald Fleury (Jamie Foxx), Janet Mayes (Jennifer Garner), Grant Sykes (Chris Cooper) and Adam Leavitt (Jason Bateman) gather what intelligence they can, agitating for access to the Saudi crime site. Denied through proper channels by the political-animal attorney general (Danny Huston, who receives a delicious dressing down from Six Feet Under's Richard Jenkins as FBI chief), Foxx plays a nifty bit of call-my-bluff politics and gets his team on a midnight flight to Riyadh. Once there, the FBI agents struggle within the straitjacket of Saudi law enforcement and their own increasingly precarious safety situation. Fleury finds an ally in Col. Faris Al-Ghazi (Ashraf Barhoum), a soft-spoken, steely-eyed Saudi investigator equally as intent on finding the man ultimately responsible for the bombings.

Berg's film works on two levels, neither of which turns out to be any kind of a profound political discussion. First, the developing friendship between Fleury and Al-Ghazi wanders into buddy-cop territory without ever becoming trite. When the big guns come out and the two find themselves under fire, it's hard not to think how much better Foxx fits with Barhoum than he ever did with Colin Farrell's Sonny Crockett (and with how much more depth, and in how many fewer scenes). As a family man who cannot stomach what he has seen and a police officer who believes in hard-won justice in an environment where image is the only security there is, Barhoum radiates quiet impatience, intelligent pride and drive. Faced with that, all Foxx has to do is keep up, and he does. (The rest of the cast, for the most part, disappears into the film's fragmented action. At times, though, Bateman does well as the smart-aleck newbie, met and matched by Cooper's grizzled, homespun old-timer.)

The second success of The Kingdom is the visceral realism of the film's visuals. Berg (Friday Night Lights) apparently has learned much from cul-de-sac neighbor and Kingdom producer Michael Mann. Evoking varying shades of Mann's signature artistries, Berg's Kingdom camera is restless and sometimes oddly placed, his lighting hazy bright and bleached, his outbreaks of action percussive and immediate.

Where Kingdom falters is in its all-too-evident aspirations. Matthew Michael Carnahan, who also penned the upcoming and similarly topical Lions for Lambs, has written a script that looks like it's saying something important without actually getting around to saying much of anything important at all. There's the undercurrent endorsement of the idea that fighting terror ought to be more of a police procedural than an act of pre-emptive war, and there's the accurate-if-familiar rumination on how hate and revenge are cancers too easily kept alive and renewed.

But the fact that the film is so obviously on its truest footing when the FBI agents and Al-Ghazi are blasting their way through a terrorist stronghold belies the centrality of any of its deeper thoughts. Which ultimately makes it hard to decipher if the film is only slightly more realistic wish fulfillment than we are used to ' team of four rocks Riyadh and scores victories against terrorists ' or the chock-full-of-wishes idea that simply by focusing on these little pieces of semi-reality, we can somehow tame the current insanity.