Director Steven Spielberg returns to Munich for an intelligent, important exploration of the raging Arab-Israeli conflict. 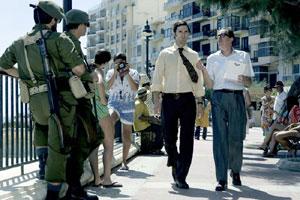 The roots of the ongoing Arab-Israeli conflict go back to the very beginnings of time, to the biblical births of Isaac and Ishmael: one son raised as Abraham's own, the other turned out into the desert, both fated to stay locked in a constant birthright struggle. Since 1948, that birthright has been defined as the narrow, sacred strip of land that three religious peoples call home and that the maps call Israel. There have been many flashpoints through the years in this constantly roiling battle, but few have seared the international soul like Munich.

In 1972, a Palestinian organization calling itself Black September shocked that city ' and the world ' when a team of its members stormed the Olympic compound, taking hostage and eventually killing 11 Israeli athletes. That earthshaking day is chronicled in chilling detail in the 1999 Academy Award-winning documentary One Day in September. Steven Spielberg's Munich purports to show what happened next.

Based on George Jonas' controversial book, Vengeance: The True Story of an Israeli Counter-Terrorist Team, Munich introduces the terrorist attack through archival footage mixed with dramatization, but soon moves on to the cabinet room of Israeli Prime Minister Golda Meir (Lynn Cohen). Meir ultimately decides that the cost of killing Jews must become too expensive for the world to bear and commissions a top-secret team of assassins led by one of her former bodyguards, Avner Kauffman (Eric Bana). Avner and his fellow agents are charged with finding and eliminating those responsible for the Munich attack. Cut off from official contact, these men are on their own in uncharted moral territory.

Early on, things go what could be called well from the Israeli perspective. Although none of the team members has assassin experience, they successfully shoot or blow up several of their targets. Palestinian operatives respond with violence of their own and eventually begin to hunt those who are hunting them, buying information from the same shadowy Frenchmen who are helping the Israelis. The mission begins to take its toll, as the team becomes a living, breathing exercise in Israeli existentialism. The antiques-dealer-turned-document-forger says this is it, this is how it has to be: us or them. The toymaker-turned-bomb-specialist eventually walks away, saying Jews are supposed to be righteous and what he has done is not righteous. And in the middle stands uncertain Avner, son of a Holocaust survivor and a war hero, father to a newborn baby girl.

Spielberg ' as close to channeling Oliver Stone as he ever will be ' for once works with a script that embraces the complexities and contradictions of his subject. Jonas' recounting of Mossad actions has often been called into question, as have the few-known facts about the level of involvement of some of the Palestinians they killed; Spielberg's not interested in a history lesson, though. He's interested in using Munich to launch a larger exploration.

Writers Tony Kushner and Eric Roth resist the urge to place a pretty bow on top of Munich or create some Spielbergian moralizing bookend construct (as in Schindler's List and Saving Private Ryan) that seeks to somehow tidy up the horror within. Avner's mother (Israeli actress Gila Almagor), in a beautifully crafted bit of dialogue, makes the ultimate case for Israel's existence: "to be a Jew among Jews, subject to no one." Her larger point is that Jews have never before been sovereign, and therefore Jews have never before been safe, the sad reality of thousands of years of extermination, pogrom and blood libel. Whatever Avner ' played by Bana with the same level of precision and passion that he showed in Black Hawk Down ' has to do in the name of his country is therefore not only necessary but admirable. But an eye for an eye doesn't really work in Munich because it hasn't really worked in real life. And while the script gives fleeting voice to the notion of land for peace (in a contrived stairwell meeting between Avner and a young Palestinian), it is never so emphatic that we mistake the idea for the cause. Spielberg is content to question, a first for him as filmmaker and a rather stunning development in the larger cultural discussion, where battle lines are all-too-often etched in stone. Munich dares to have no answers, and there is beauty and sadness ' and import ' in its ambiguity.

Unfortunately, there is also length. Since Jaws Spielberg has retained the right of final cut, and most of his "grown-up" films are worse for it. Schindler's List stands the test of time, but a good, objective editor could surgically enhance films like Saving Private Ryan, Minority Report and Artificial Intelligence: AI by shaving off minutes and minutes of Spielberg's most leaden, pretentious filmmaking. Munich suffers similarly with its poor pacing. There is real brilliance in this film, but it is brilliance nearly eclipsed. Spielberg makes it too easy for superficially engaged viewers to stop caring along the way. His truly gifted probing of the philosophical standoff demonstrated by that dark day in Munich nearly falls prey to his own directorial idiosyncrasies. He survives on good intentions.

Spielberg has called Munich "a prayer for peace." If that's what it is, then it's a prayer flung into the heavens, heavy with hope and despair. When a wasted, weary Avner expresses that perhaps there is no peace at the end of what he is doing, he could be speaking for us all.