In the mesmerizing Apocalypto, director Mel Gibson turns his heaping heart of darkness toward the fall of an ancient civilization ' with all its overtones for our time. 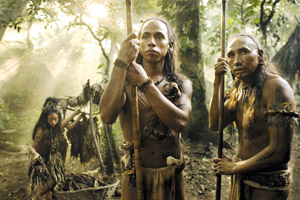 The end is always near. Not knowing it's coming doesn't mean it isn't almost here anyway. Quite to the contrary, not recognizing its approach is probably a prerequisite for its terrible arrival. Life as usual forges ahead, under a gathering cloud that too few look up to notice. Every empire thinks that it is the last, the divinely inspired denouement of a straight-line history, when ' more accurately ' each is simply a separate curve in time's cyclical, downward spiral. In a macro-historical sense, the end is always happening. For someone, somewhere, the apocalypse is always now.

The Mayan-era men of Mel Gibson's Apocalypto are blissfully ignorant of this truth of fate's cosmic, karmic cruelty, at least for the film's opening moments. A hunting party chases down a wild-hearted tapir, using speed and stealth to bring down its prey. As Jaguar Paw (Rudy Youngblood), his father Flint Sky (Morris Birdyellowhead) and their fellow tribesman divvy up the meat from their kill and engage in raucous banter and joking, a spooked clutch of refugees stumbles into the clearing, requesting safe passage past the hunters. One man, eyes wide with an unnamed terror, relates that their land has been ravaged and that the group seeks nothing but a "new beginning." Of all his party, only Jaguar Paw seems troubled. His father counsels him to keep his worries to himself when they return to their home village, observing the corrosive nature of such fear.

Jaguar Paw is soon swept up in homecoming and family, greeting his pregnant wife Seven (Dalia Hernandez) and their young son Turtles Run (Carlos Emilio Baez). The village celebrates the return of its men with stories, bonfires and dancing; a village elder tells an ominous, mythical story about the hole at the center of man that forces him to keep taking from the world around him. But his warning lesson gives way to life, as a drumbeat begins and the villagers rise to their feet in celebration. It is the last night that all will be well with them. In the morning, a Mayan raiding party attacks their village, killing a few inhabitants and taking captive the rest. Before he is caught, Jaguar Paw manages to lower his young family into a deep cave. Noticing Jaguar Paw's interest in the hole, one of the Mayan marauders cuts the rope that hangs down, stranding the hidden mother and child. The captives, Jaguar Paw among them, are led off through the jungle to an unknown future.

What follows is an odyssey of violence, adrenaline and odd beauty. Gibson has a dark vision that he once again indulges to powerful visual effect. Jaguar Paw and his mates are taken through raging rivers, blighted crops and scenes of strange sickness. Along the way, a preternatural child (think Alicia Witt in David Lynch's Dune) eloquently curses the Mayan warriors that shun her. She is alien and frightening ' and one of the most beautiful, creative parts of Apocalypto.

The destination Mayan metropolis is, at one and the same time, a site of construction and frenzied deconstruction. Workers dusted white with limestone build pyramid-like structures, as slaves are bought and sold and the new captives are slathered with blue paint. (Remembering Braveheart, one wonders about Gibson's fascination with the male form smeared with cerulean pigment.) The men are led to the top of a tall structure, where a high priest begins to sacrifice them to appease the angry god thought responsible for all the decay that Jaguar Paw has witnessed; the priest hacks off the heads of the captives and tosses them down the long stairway at his feet. The crowd roars with every decapitation.

As with his previous efforts, most notably Braveheart and The Passion of the Christ, Gibson lingers over the savagery of his surreal world with something approaching an unsettling salaciousness. He is a masterful filmmaker, with an epic eye and an unswerving sense of the velocities of his plot. But the violence of his films often overwhelms the narrative. Here, he hopes to comment on a culture's often-inflated sense of its own destiny and what happens when a pinprick of fear turns into a wormhole of rot. It's a provocative theme, particularly for our times. But the too-many-to-count headless bodies bouncing down the pyramid ' and other gory scenes ' frequently make it hard to concentrate on Gibson's larger point. And at a certain point, bigger ideas are trampled as Jaguar Paw's story runs wild.

Still, although its imaginings of an ancient culture should not be mistaken for historical accuracy, Apocalypto is a well-made film and an interesting one. Only its unrelenting barrage of brutality keeps it from being mistaken for a mythic one.