Eddie Murphy's comedic talent gets swallowed up in Norbit. 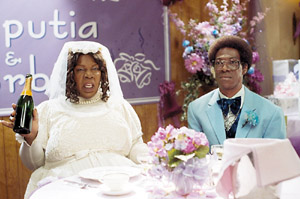 If you're an Eddie Murphy fan, and you have a big smile on your face because he's experiencing some sort of career resurgence with his Oscar nomination for Dreamgirls, prepare to have that smile wiped right off your face. Norbit chases one of Eddie's career highpoints ' I still say Trading Places was his career best ' with possibly his very worst film. It is full-on awful.

Murphy isn't to blame. The man is super-talented. Somebody got the idea to return him to comedic form with another multi-character movie like Coming to America and The Nutty Professor and just went haywire. Seeing Murphy under pounds of Rick Baker makeup is always instantly amusing, but then he has to open his mouth and share the screen with others, so you better give him a script worth reading.

I'd be surprised to find out that this one even had a script. One of the three roles Murphy plays is the title character. When Norbit is a little boy, he loses his first love when she is adopted. He winds up being roped into a marriage with Rasputia (also Murphy), a gigantic nightmare of a woman. When Norbit meets his first love again as an adult (Thandie Newton), he starts to grow a spine and attempts to liberate himself from the domineering wife. Murphy also plays Norbit's Asian adoptive father ' in another unimpressive performance.

The first glimpse of Murphy as Rasputia is surprising. The man disappears inside of the makeup Baker has concocted, and the fat suit he's created for this film is a major work of art. If Norbit was even remotely worth watching, Baker would be a definite for a makeup Oscar next year. As it stands, all involved (other than the folks who greenlit this inexplicable hit) would probably like to remove this one from their resumes.

The movie's attempts at humor are abysmal. The only laughs Murphy generates in this film are when he's playing the nerdy Norbit, but we're not talking big guffaws. Just a few mild chuckles. For the most part, his work is overbearing and unfortunate.

Murphy, one of cinema's all-time great riffers and improvisers, resorts to squawking, strutting and stupid catchphrases ("How you doin'?") to milk laughs. It's painful to watch him struggle with this material. One gets the sense that the man just got tired after sitting in the makeup chair for hours and couldn't give it his best when the cameras were rolling. It doesn't help that Brian Robbins, of The Shaggy Dog fame, is directing. The man just doesn't know how to do funny, and Murphy has never seemed less funny.

Still, kudos to Baker for some of the most amazing makeup effects I've ever seen. Murphy's Rasputia fat suit takes full-body makeup to new, morbidly obese dimensions. A scene where Rasputia heads to the water park in a two-piece is incredibly mundane yet notable because Baker's makeup is unbelievably realistic. Perhaps one of the problems with this picture is that Baker manages to make Murphy completely vanish. He's "made-up" Murphy many times before, most notably in the aforementioned Coming to America and The Nutty Professor. This time out, he just erases the guy.

As Norbit's love interest, Newton is a decent actress who, nevertheless, seems totally lost in a slapstick comedy. Everything about her character is exaggerated, with the actress trying too hard to get laughs. So that's two normally reliable performers that Robbins makes look like idiots.

Murphy is slated to make another movie with Robbins in the near future (Starship Dave). Let's hope that despite the big box-office opening weekend, Norbit convinces him that Robbins isn't worthy of his talents. Yes, I would rather see Beverly Hills Cop 4 ' a rumored project ' than another collaboration with this hack.