The rage virus is contained, but 28 Weeks Later, it rises to kill again. 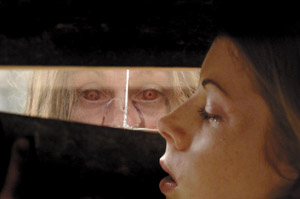 The infection, once passed on, is instantaneous and uncontrollable. There are no death throes, no time-lapse transformations. A snarling, bleeding, feral "infected" leaps onto its prey, spitting, spewing, chomping ' and birthing the newest member of the mob zombie. They bite, you die.

The blood-borne rage virus that possesses these newly damned first appeared in London, its insidious infection escaping a research facility when unknowing peace activists set free a diseased monkey; 28 Weeks Later, it still rages, an eschatological plague for the 21st century. The affected are everywhere, traveling in packs and hungering for fresh flesh. Once they break down a door or burst through a boarded-up window, the person hiding inside is pretty much done for.

The group of six survivors quietly huddled in a darkened farmhouse know this. All came to the house with separate stories of the cannibalistic chaos that has engulfed their country, stories we never learn, for the most part, and don't really need to know. All that's important is that they are each still here and striving for some sense of normalcy. As Alice (Catherine McCormack) cooks a meal of canned vegetables and pasta, her husband Don (Robert Carlyle) forages a bottle of drinkable wine from the dusty shelves. The grandmotherly woman who owns the home finds a box of chocolates in the basement and proudly presents it to her guests. Her husband sips the wine, finding in it hints of vanilla and autumn. Candles grouped around the kitchen and living room lighten the oppressive shadows.

And yet the horrors outside encroach. Don and Alice share an agonizing moment in the kitchen, missing their children Tammy (Imogen Poots) and Andy (Mackintosh Muggleton) but rejoicing that they were safe in Spain on a school trip when the outbreak began. Another of the refugees, a pregnant blonde, sets a place for her boyfriend, who left the safe house five days ago and has not returned. And then a pounding on the door begins, a doom-filled sound that will ultimately let in the light outside ' and the darkest of nightmares.

Building on 2003's unsettling, innovative surprise sleeper 28 Days Later, 28 Weeks Later picks up the surreal story of the end of the modern world, as imagined by screenwriter Alex Garland and director Danny Boyle (Trainspotting). Not in any true linear sense ' the fates of the characters of the first movie are never resolved, key story threads are not clearly aligned ' but rather as another slice of post-apocalyptic life. The virus has raged through Britain, seemingly exhausted by quarantine. A sector of London, pointedly named the Green Zone, has been cordoned off from the rest of the countryside's contamination. American snipers line the rooftops as an American doctor (Rose Byrne) repatriates the returning refugees. Among them are Tammy and Andy, met at the train station by grateful and grieving widower Don. But there are secrets in this London, and fear. The end isn't anywhere near over; it is still extremely nigh.

Spanish director Juan Carlos Fresnadillo (Intacto) and his co-writers Rowan Jaffe, Jesus Olmo and E.L. Lavigne reincarnate the original film's immediacy, if not its intimacy. The chaotic swirl of blood and action once again envelops the camera, every other breath breaking in ragged surprise. Worst-case scenarios give way to even-worse-case scenarios, as London begins to once again broil with this seemingly unstoppable anger, trapping together our ragtag band of characters and countless zombie killers in a maze of fire and poison gas.

The film's attempts at import are not fully formed, yet have tantalizing potential. Disasters the world over ' from Hurricane Katrina to the ongoing chaos in Iraq ' echo in Weeks' chamber. As the first trainload of returnees enters the Green Zone, passengers spy leftover signs painted on rooftops and lettered on sheets hanging over balconies. "I am here," they cry. When the virus' resurgence is discovered, survivors inside the zone are herded into a dark and confined space for their own protection, and yet what happens inside is not refuge. American boots on the ground, ill-prepared and without ample understanding, add fuel to the inferno. Weeks wants to speak of the complicated morality of survival, of the noble futility of certain sacrifices. Its statements strangle in the throat, however, obliterated by the ever-advancing zombie hordes.

In between the manic moments, the eerie stillness of Fresnadillo's barren London streets never rises to the artful emptiness of Boyle's wistful sensibility. The first film was as striking for its sad simplicity, embodied by the innocent-eyed Cillian Murphy on his otherworldly odyssey, as it was for its garish gore. Graffiti, an abandoned market, a sweet suicide note ' these were the currency of 28 Days Later's look at life after the death of civilization. Weeks struggles to mimic the depth of such fraught familiarity, but fails, lost in its own blood.