What on earth did director and writer Paul Weitz eat to give him such awful American Dreamz? 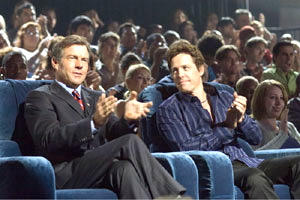 Now is the time for all good satirists to come to the aid of their country. Emphasis on the "good."

With all the insanity and insufferability of the geopolitical jetsam we find ourselves floating in these days, it seems like it ought to be easy (or at least easy to make it look easy) to exploit the many slings and arrows of the times in which we live. As late-night sultan of swat Jon Stewart is fond of observing with his trademark self-deprecation, some material really does write itself.

Not everyone is clever enough to let that happen, judging from the mediocre, humorless American Dreamz. Paul Weitz's film is not funny, and it's not smart; by the excruciating end, it's not even watchable. One can simply marvel at the magnitude of this misfire, given that we are living in such a golden age of snarkiness. Superior satire is all around: The Daily Show, The Colbert Report, The Onion. Hasn't Weitz (American Pie) seen any of this stuff? And if he has, how in the name of unholy humor did he mistake his own ill-formed, ill-fashioned film for funny?

His idea had potential. There is something infinitely noteworthy about the fact that we live in a country where people vote on a weekly basis for the winner of a televised talent show with more enthusiasm and care than they take to the polls every four years to vote for the leader of the free world. And when that talent show features a love-to-loathe, sharp-tongued Brit who tramples on a thousand wishes for every one he grants and when that leader of the free world has proudly stated that he doesn't need to read the newspapers because his people do that for him, the darkly comic possibilities seem endless. But they aren't. Like a Saturday Night Live sketch that goes on too long, American Dreamz's random thoughts never gel into complete ideas. Instead of intelligent exploration, we get little more than "hey, isn't it funny that ... ." That's not satire, folks, or even parody or farce; that's an early-stage brainstorm session. And that's all American Dreamz manages to be. The film fails because no one is really skewered, nothing thought-provoking is said, and all that's left is just a bunch of goofy acting.

Martin Tweed (Hugh Grant) is a miserable man; he's a television mogul held captive by his own success, saddled with a show he hates for yet another season of pop-star wannabes. One of these wannabes is Sally Kendoo (Mandy Moore), all sweetness-and-light sincerity on the outside and all avarice and ambition on the inside. When she thinks her dullard boyfriend Willie (Chris Klein) is a drag on her fortunes, she kicks him to the curb; as soon as he becomes an injured war hero, though, she quickly reunites with him, one eye on the rolling cameras to make sure they are capturing "her story."

Sally's main competition is Omer (Sam Golzari), fresh off a stint as a show-tunes-loving terrorist-in-the-making. He was a horrible recruit, and so he's sent to live with bougie relatives in California to keep him out of the way ' until he accidentally finds himself cast on American Dreamz. Suddenly, he's useful to his terrorist network. The suddenly floundering president of the United States (Dennis Quaid), it seems, has agreed to be the guest judge for the contest's finale, and if Omer can make it to the last show, he can martyr himself ' and kill the president ' for the cause. But what if Omer wants to win more than he wants to die? Non-hilarious hijinks ensue, all leading up to a climactic conclusion that, well, bombs.

Grant remains in his glorious cad phase (Bridget Jones's Diary, Two Weeks Notice); his opening scene with a lover who is leaving him is startling and fresh. His is really the only interesting performance (or dialogue) in the film, the only one that seems to change as time goes oh-so-slowly by. Moore reaches a surprising level of callousness as Sally, but we've seen her play the brat before in Saved! Quaid gets novelty points for a pretty dead-on Bush impersonation (second only to the brilliant Will Ferrell's), but the depiction doesn't go anywhere. Too much of what is supposed to be funny ' including Quaid's awkward interactions with Willem Dafoe's Cheney-esque chief of staff ' is just obvious and tired. Take, for example, Dafoe planting a tiny transmitter in the president's ear so he can tell him what to say; didn't we leave these jokes behind a few weeks after the second presidential debate?

American Dreamz tries to be Wag the Dog. It tries to be Dave. It even tries to be a lot like Clueless and a little bit like Heathers. It just doesn't try quite hard enough. Ultimately, you'll be better off not having these Dreamz and just getting a good night's sleep instead.