The human race faces extinction in Children of Men. 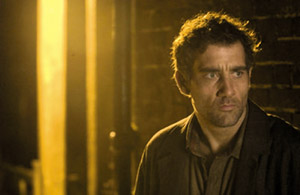 Civilization is in the throes of endgame with director Alfonso Cuarón's Children of Men, an unrelenting and bleak outlook regarding future times. The film opens in the year 2027, when former activist/now civil servant Theodore Faron (Clive Owen) is making a routine stop for a cup of coffee. As he pauses outside to mix his cup of joe, a bomb destroys the building he's just departed. Shaken and dazed, he walks through the carnage, which includes a woman holding her severed arm.

Cuarón's nightmarish vision of the future (based on the novel by P.D. James) sees a world overrun by military governments and a world where women are unable to have babies. It's been 18 years since the last birth of a child, and Earth's youngest human inhabitant has just been assassinated by a crazed fan. This event sparks unholy violence, brought on by the realization that man doesn't seem to have much time left.

Theodore finds himself thrust back into a political movement fronted by his former lover (Julianne Moore), trying to find safe haven for Kee, the world's first pregnant woman in nearly two decades (Claire-Hope Ashitey). The journey takes him through a devastated Great Britain, where soldiers occupy the countryside, and firefights are a regular occurrence. One remarkable scene involves motorcycling marauders attacking Theodore's traveling car. The sequence is terrifying, a depiction of raw violence that fuels Cuarón's atmosphere of hopelessness ' the hero of the film isn't even safe in a speeding car.

As heroes go, Owen's Theodore isn't a prototypical one. He's not particularly smart or brave, getting friends killed along the way and getting by on luck more than skill. Owen plays the character with an equal amount of cowardice and bravery, a sort of everyman with no distinctive features, other than he looks and talks like Clive Owen. When guns and bombs go off, he doesn't pick up artillery and blaze away; he cowers.

Michael Caine plays his philosophical friend who hides out in his home smoking pot and taking care of his handicapped wife. Caine's moments are probably the goofiest in the film. While the dialogue is meant to be the comic relief, it's Caine's silly and distracting wig that's humorous.

Other good supporting performances come from Julianne Moore as Theodore's ex, and Chiwetel Ejiofor as a member of her militant group. Each of their characters supplies many surprises, some of them downright shocking. Also shocking is "Running the World," the morose song with the memorable chorus by Jarvis Cocker (formerly of Pulp) that plays over the film's end credits.

With the arrival of Children of Men, director Cuarón proves he's responsible for some of the better-looking movies in the past five years. His Harry Potter installment was a masterpiece, and even his minimalist Y Tu Mama Tambien has a visual style all its own. This time out, he uses cinematographer Emmanuel Lubezki, his cohort on Y Tu Mama, and Lubezki has shot a major work of art. Everything is washed out with a blue tint, a world that sometimes looks suspiciously like war-torn Iraq.

Cuaron doesn't treat his future world like fictitious science fiction. He's implying that our current paths will lead to an apocalypse not unlike this one. His world is so ugly that infertility seems to be a blessing because no child should occupy it. The final shot of the film can be taken two ways ' and I think the sinister one is the vibe Cuarón intended.