A script crafted of good intentions ' and little else ' is the main reason that Catch a Fire never really does. 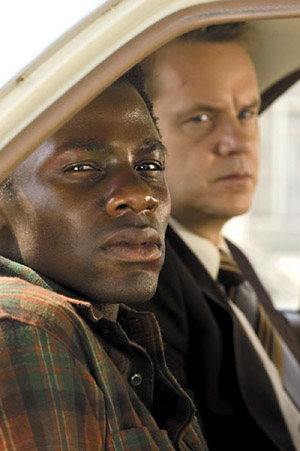 The first time Patrick Chamusso catches his mother surreptitiously listening to Radio Freedom late at night, he angrily shuts off the portable set and removes it from the room where she sits. The voice of the anti-apartheid African National Congress already reverberates throughout his community but is not allowed inside the humble home of the go-along-to-get-along oil-refinery foreman.

The second time Patrick catches Mama Dorothy, he walks in, looks at her wordlessly ' and turns up the volume.

What happens in between ' the true-to-life events that turn a studiedly apolitical father and husband into a man willing to forsake family and fear to fight a monstrous system ' ought to be the heart of a taut, politically relevant thriller. Instead, Catch a Fire's slight, simplistic and-then-this-happened-and-then-this-happened script undercuts a pair of interesting performances and a compelling life story.

Patrick Chamusso (Derek Luke) is just trying to live his life, love his wife Precious (Bonnie Henna) and raise his two little girls (Onthatile Ramasodi, Ziizi Mahlati). In many ways, apartheid is something that is happening to other people. He sees its effects all around him in the tiny South African town of Secunda where he lives and works but chooses not to engage. Returning from a wedding, in the film's opening scene, he is forced from his car by white South African policemen and shoved to the ground; two men in the car ahead of his family flee the roadblock and are shot. The violence registers only ever-so-slightly behind Chamusso's eyes, as a white hand grinds his face into dirt and rocks. Still, one day shortly thereafter, when his coworkers chant an anti-apartheid song as they line up for security checks at the refinery, Chamusso stands silent, a still figure in a singing sea of righteous anger.

Soon enough, though, the horrors of apartheid's police state knock down his carefully closed door.

Absent from work on the day that an explosion rocks the coal-to-oil refinery where he works, Chamusso falls under the suspicious eye of white anti-terrorism official Nic Vos (Tim Robbins). As standard operating procedure, Vos detains Chamusso and tortures him to determine the extent of his involvement in the oil-refinery attack. Caught in one carefree lie (Chamusso had called in sick on the day in question to coach his soccer team in a tournament's final round in a neighboring town) and one more fraught (he also visited another woman, the mother of his secret son, while he was away), the innocent man appears guilty to Vos, whose zeal is fueled by blatant oligarchical fear.

Vos tries to chalk up all of the above to "just doing his job," but part of that job includes brutalizing Precious, wrenching a false confession from Chamusso and then deciding that he seems innocent after all. When Vos releases Chamusso, he has no idea that he's unleashing a hurricane of his own making.

The quiet family man who wouldn't even listen to Radio Freedom before his detention disappears, leaves behind his wife and children, and wends his way through Mozambique, Angola and Swaziland to become a fighter in the service of the anti-apartheid African National Congress. His goal? To destroy the oil refinery that, indirectly, destroyed his life, and reclaim the first small piece of all that was taken from him.

Catch A Fire is ably ' if flatly ' directed by Phillip Noyce, whose previous works include the schlocky-but-fun The Saint and 2002's critical darling Rabbit-Proof Fence. Noyce makes pretty pictures, but he never seems to latch on to a script with any depth or nuanced mega-metaphors. Even the affecting Fence, which illuminates Australia's terrible treatment of half-caste (or half-Aboriginal) children in the 1930s, mostly struggled to create any kind of larger narrative ethos. Fire is more of the same, too straightforward for its own good. If it weren't for Luke and Robbins, the film would fall apart.

Luke (Antwone Fisher) shows great promise as the brooding Chamusso; he keeps us entranced long after the script leaves him high and dry. The reliably kinetic Robbins makes Vos a monster, but one with an all-too-human face. Here was a chance for a great character study, one that might make audiences question their own complicity in deeds perhaps not yet commonly known as acts of terror. Vos is a missed opportunity to examine how far the threatened will go to protect themselves. Little of this complexity in Vos' character is written into Shawn Slovo's amateurish script (with even less of it written well), but Robbins still oozes a kind of indecent paranoia.

It's fairly easy to warm to Fire's good intentions, but as the film plods along to its conclusion, truth surfaces to make a mockery of Slovo's strangely inert fictionalization. The real Nelson Mandela appears on-screen, fist in the air, gentle voice proclaiming, "Power." This one image is more moving than anything else the film accomplishes. Which makes Fire almost worthwhile, but not quite.