In a year where there were too many solid films and performances vying for too few Oscar spots, an old cliché finds new meaning. 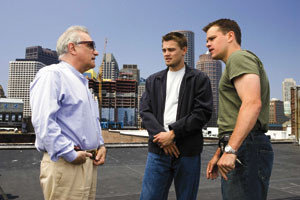 It cannot be easy to be Oscar. No matter what you do, someone (maybe make that a million someones) is going to gripe loud and long about who you ignored, who you shafted, who you've got it in for. Hollywood, critics and entertainment writers, and the movie-loving public at large have never seemed to have much of a problem looking this little golden gift workhorse in the mouth. All Oscar wants to do is throw some career-making kisses, but no one will let him. For Tinseltown's highest honor, he's certainly always met with an ordinate amount of trash-talk. What's a lonely, legendary little bald guy to do?

The best he can, which this year meant making hard choices and living with them. Most years, it's easy â even fun â to pore over the nomination lists and decide who doesn't belong. The films of 2006 make that game a little bit harder. With such solid films and performances to choose from, it's amazing how many categories are foregone, little-disputed conclusions. What's equally amazing is how many good guys and gals just simply got left out because there wasn't enough room in the in-crowd. Several omissions bear mentioning, but first to the categories:

Let's start where the ceremony usually does, Best Supporting Actress. Dreamgirls' Jennifer Hudson looks to be the shoo-in; her dramatic breakthrough performance as the wronged Effie White has been the toast of the awards circuit thus far, based largely on her wrenching rendition of "And I Am Telling You I Am Not Going." Statuettes have been given for less. Still, it's hard not to mourn the passing over of Rinko Kikuchi's silent, soulful lost girl from Babel.

Hudson's Dreamgirls' costar Eddie Murphy seems poised to become the new Robin Williams, with a Best Supporting Actor win. He's good, and while it will be fun to watch Norbit win (seriously?), how awesome would it be to see Little Children's Jackie Earle Haley roar back from obscurity to take this one? Or to see the Academy award the most poetically profane performance ever, Mark Wahlberg's Boston badass in The Departed?

Need we even discuss Best Actress? For the timeless, always true Helen Mirren, it's been quite good to be The Queen.

Ditto for Best Actor. It's hard to grouse about the powerhouse performances missing from this category (see below) in the face of Forest Whitaker's fierce Idi Amin in the otherwise slight The Last King of Scotland. Scotland should have slipped into oblivion; Whitaker made it a destination in demand.

Paul Greengrass really has little business being nominated in the Best Director category; United 93 was largely experimental, yes, but successful? No. Still, the last half hour of his film is powerful and immediate and so many of the things that movies ought to be, so he gets a pass. Other nominees â Frears, Eastwood, Inarritu â created masterful, memorable films. But there's such a thing as an idea whose time has come. And while we agreed at the top to cut Oscar some slack, it must be said that if Scorsese doesn't win this one going away for The Departed and every other underappreciated masterpiece in his filmography, everyone who's ever been to the movies, everyone who's ever even heard of the movies, should boycott something. Oscar voters seem to like to split the big prizes, and this year, for once, that's as it should be. While Scorsese is being escorted from the stage with the Oscar he should have gotten decades ago, someone ought to be calling up the representatives of the silver-tongued Babel to collect Best Picture. A patchwork of four seemingly disparate stories of solitude and solidarity, the film is enigmatic and eloquent and a rare surprise in its understated emotional intelligence.

Now, a moment of silent respect for a few of those whose year it should have been, those whose year it might have been but for such an excellently crowded field: Diane Lane and Ben Affleck's superb call-and-response performances as doomed lovers in the overlooked Hollywoodland; Sean Penn's subtle, sly Willie Stark from the fatally flawed All the King's Men; Brad Pitt's Babel brokenness; Clive Owen's fully birthed Children of Men hero; Matt Damon, for either his quiet repression in The Good Shepherd or the startling savagery of his bad cop in The Departed; the devil-may-and-does-care deviance of Jack Nicholson in The Departed; Leonardo DiCaprio â Blood Diamond scored a nomination for him, but it was in The Departed that this young actor came into his own; Oliver Stone's elegiac, elegant direction of World Trade Center; and the simple, scissor-sharp satire of Jason Reitman's Thank You for Smoking script.