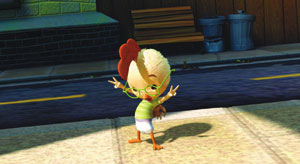 A pesky younger brother just wants to be noticed. An accident-prone egghead chick just wants to be believed. Such is the stuff of Zathura and Chicken Little, two top options if you've got tots in tow for this year's Turkey Day viewing. Director Jon Favreau's space adventure Zathura works well for older kids who can stand a dose of danger with their popcorn; Disney's Chicken Little is quite cute and cuddly, perfect for younger cinemaphiles. The best news of all, though, is that both are just good enough for parents and good-natured aunts (just, say, for example) to make it through without succumbing to an attack of the kid-friendlies.

Favreau's first foray into family film, the inspired 2003 Will Ferrell vehicle Elf, demonstrated an easy-going style and a slightly off-kilter sense of humor that had a little something for viewers of all ages. Zathura's plot might not be quite as sophisticated as Elf's was, but this time, Favreau manages to hold it all together until the very end.

If brothers Walter (Josh Hutcherson) and Danny (the delightfully monikered Jonah Bobo) are awake, then they are fighting. Walter wants to leave his still-babyfied brother behind: he cheats at games, he whines, he can't read. Danny, on the other hand, feels infinitely inferior to his athletic older brother and just wants to be better at something once in his little life. Dad (Tim Robbins) runs to the office for a few minutes on a Saturday afternoon, and the stage is set ' for intergalactic adventure? In the basement, Danny finds Zathura, a space-themed board game you don't so much play as live. (If this play-world-becomes-real-world sounds a bit familiar, Zathura and Jumanji were both based on books penned by child author Chris Van Allsburg of Polar Express fame.)

For the most part, Favreau employs a light touch with his special effects, from the surprise meteor shower that zings through the living room to the panoramic planetary views just outside the boys' front door. His only missteps are the lizard alien Zorgons, who are much scarier before we see their puppet noses poking up the staircase.

It's all pretty simple, yet it's all pretty suspenseful, something to perhaps keep in mind for tinier viewers. The robot is Terminator tenacious, and the aliens attack with guns blazing. But the heart of the movie is our likeable loser, Danny. Bobo's performance is unaffected and charming, and he makes us cheer lessons learned and adventures survived. It's a trait he shares with the fuzz-faced protagonist of Chicken Little.

Disney's retelling of the childhood favorite imagines Chicken Little (voiced by Zach Braff of Scrubs and Garden State) as more mistaken than flat-out wrong. It wasn't the sky that fell, but a panel from an alien spaceship able to camouflage itself. Still, he discovers this fine point a little late in the game, after he's already been branded as the chick a tad too quick to sound the alarm. Not even his caring-but-uncommunicative dad (Garry Marshall) believes him. Along the way, our zero of a hero navigates missing the bus, dodge ball in gym class, the ridicule of his fellow townspeople and ' horror of horrors ' organized team sports. Through it all, trusty sidekicks Abby Mallard (Joan Cusack) and Runt (Steve Zahn) struggle to keep up.

The animation of Little, Disney's first post-Pixar picture, is lively. Its considerable zip keeps the film afloat long after the story starts to meander. A decoupage of Dad issues, schoolyard cruelty issues, self-esteem issues and trust issues is interrupted only for pop-culture punch lines and musical montages. After all that, the ultimate alien invasion with all of its cartoon-y War of the Worlds overtones is a welcome respite.

Little charms nonetheless because its characters are so darn delightful. Who could resist Braff's warbling, excruciating rendition of the Queen classic "We Are the Champions"? And little lost alien Kirby (voiced by Sean Elmore, Evan Dunn and Matthew Josten) is a fantastically fuzzy-wuzzy cross between a troll doll and a Muppet. Cute characters, a fast pace (80 minutes) and solid visuals make Little fun, if forgettable.

Not every kid flick can be Shrek, with its whimsicality, silliness and wisdom. But not every movie has to be a mind-melting migraine-waiting-to-happen like The Rugrats, either. Thankfully, Zathura and Chicken Little manage to split the difference, and that ought to be fun enough for the whole family.