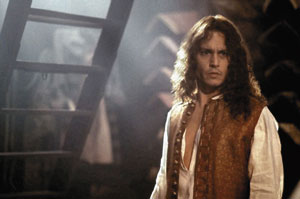 He warns us at the beginning, stepping out of the dark shadows to fling forward the words, "You will not like me." And Johnny Depp spends the next two hours trying his level best to make it so, in director Laurence Dunmore's period piece The Libertine. In the end, Depp succeeds, not because he is so masterful as to make himself loathsome ' no one is that good ' but rather because Hollywood's hottest artist here inhabits a dull script full of dull speeches and filmed in dull colors. The 17th century malcontent that he plays isn't unlikeable because we're horrified and secretly titillated by his immoral lifestyle; instead, he's unlikeable because his licentiousness seems so dreary. Our hero/antihero seems not so much debauched as depressed, and how much fun is that to watch?

The film's titular libertine would be appalled. John Wilmot, the second Earl of Rochester, was by all accounts witty and wise and thoroughly wanton ' exactly the kind of guy you'd want at your dinner party if you wished to tempt fate and push boundaries. (And what great host or hostess doesn't want to do that?) Wilmot lived a Byronic life more than 200 years before there even was such a thing and, like his spiritual successor, held absolute abandon at bay long enough to scribble out a few works of genius. Of course, Byron did die of a respectable fever, possibly malaria, whereas Wilmot succumbed to something more dreadful, probably syphilis. But the thing about the Wilmot-Byron school of scandal and social anarchy is that it was probably fun for a really long time or else it wouldn't have been tempting (or immortalized). You couldn't tell that from The Libertine.

Simply put, first-time director Laurence Dunmore could not have done less. His script is an adaptation of the Stephen Jeffreys play, and it plods along from one lengthy, leaden speech to another with only the occasional spark of life. The pacing is too staged to satisfy the more fluid requirements of screen, much less of life ' if Wilmot truly had been this self-important and didactic, he'd have undoubtedly lived a much more conventional existence.

No doubt 17th century London and its environs were this muddy and this poorly lit, but Dunmore unwisely sacrifices all of his visuals for unpleasant verite. Everything seems somehow coated in the same brown sludge. The acting, on the other hand, is quite colorful at times. Depp always conveys a certain loucheness ' a narrowing of the eyes, a slight puckering of the lips ' but for all his theatrics, The Libertine still leaves you wanting a little more Jack Sparrow and a lot less Ichabod Crane. Almost more interesting than the man at the center of the story are his primary female companions: struggling, seething actress Elizabeth Barry (Samantha Morton) and long-suffering wife and willing victim Elizabeth (star-in-the-making Rosamund Pike). So solid are the performances that some are invoking Oscar's name already, but the truth is that this odd film, unlike the life it purports to illuminate, will most likely be forgotten.

Yippy-ki-ay, action film fans. Eighties he-man Bruce Willis has somehow grasped a truth that still eludes his demographic brother Harrison Ford: their heyday of exploding cars and physically heroic leading-man roles has passed. Neither one can sell it any more (Harrison's hit the Firewall), but only Willis has been able to reinvent himself. His renaissance began a few years back, thanks a lot to a visionary named M. Night Shyamalan and thanks a little to the cast of Friends. In fine films like The Sixth Sense and Unbreakable, Willis found a way to be a different kind of hero, and in more forgettable works like The Whole Nine Yards and a several-episode stint on everybody's favorite sitcom, he found a way to be funny. Who knows how hard it was to pull off, but Willis gave his audience whole new ways to like him. And then there came Robert Rodriguez's brilliant Sin City, in which Willis took his do-gooding detective persona and allowed him to â?¦ gasp â?¦ age. His Hartigan still has heart, but he no longer has health or youth. He's a beaten-up, beaten-down, bloody brilliant transformation.

As the chief protagonist of Richard Donner's latest film, 16 Blocks, Willis hearkens back to Hartigan and crafts another rundown wreck of a hero. Jack Mosley is tired; he's a graying cop who's seen better days and now limps around police stations and crime scenes, not looking for clues so much as searching for his next drink. One day, he pulls a seemingly simple assignment: escort petty criminal Eddie Bunker (Mos Def) to his court hearing a mere 16 or so blocks up the street. Mosley of course stops at a liquor store to grab a fresh bottle and returns to his car to see a man with a gun menacing the good-hearted, fast-talking Eddie. Mosley might be a drunk, but he's still got a steady shooting grip ' he pulls the trigger and pulls police wrath down on his own head. Eddie, it seems, was going to turn in a few dirty cops at that court hearing, and the brotherhood in blue ' including Mosley's former partner Nugent (the terrifyingly talented David Morse) ' isn't in the mood to let that happen. The race is on.

Donner (The Omen, the Lethal Weapon series) knows how to film a tight story, and he's helped considerably by a smart-if-superficial script by newcomer Richard Wenk. The two create a suspenseful popcorn movie that doesn't bore to tears and insults absolutely no one's intelligence. But the fuel this film runs on is the chemistry of Willis and Def ' one a silent, solid anchor and the other a nattering, endearing scene-stealer. A few Pollyanna-ish inclinations notwithstanding, 16 Blocks finds ways to keep us watching, a la Willis.