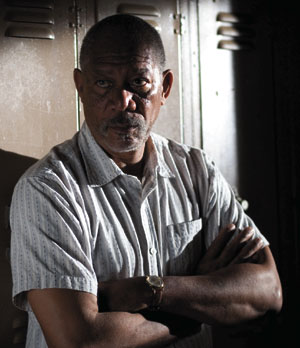 It seems that Oscar's guest list always raises a few eyebrows. Every year, a handful of interlopers somehow find themselves receiving the VIP treatment, while once and future A-listers are left to wander in the wasteland that is the other side of that velvet rope.

Granted, you can't please all of the people all of the time, and while Oscar's slights come every year without fail, they are usually confined to a few here and there. Last year was a fantastic fluke; the golden statue seemed to undergo an extreme makeover, with a nomination list that showed a surprising depth and diversity. (Lost in Translation cheek by jowl with Lord of the Rings. A nod for Johnny Depp in Pirates of the Caribbean, the kind of movie the Academy would normally have ignored.) Yes, Oscar was still his old fickle self and more political than LBJ when some wayward senator had gotten the 10-gallon Texan's dander up ' but there was a hint of daylight, fresh air, little birdies singing in the trees.

So much for that.

To be fair, 2004 was probably not as interesting an overall film year as 2003. And a glance at the current slate of nominees does reveal Oscar occasionally stepping out of his comfort zone. Still, it's simply too hard to pretend that the wrong side of that velvet rope isn't crowded this year; in fact, it might just be the most exclusive party in town.

But Sunday's show must go on. Those awards, after all, have to sit on someone's shelf.

Best Picture: The biggest story of the year is the fact that Mel Gibson declined to lobby voters on behalf of The Passion of the Christ and got exactly what he asked for: next to nothing. Here's hoping Hollywood is proud of itself for ignoring one of the most provocative and well-crafted films of recent memory in favor of lighter, less controversial fare. And where is Michel Gondry's demented, delicious Eternal Sunshine of the Spotless Mind? With such a diminished field of competitors, the race is between the overblown, overhyped probable winner The Aviator and the truly fine Million Dollar Baby, the best of what's nominated.

Best Director: As long as fans have waited to see Martin Scorsese make that long walk to the stage, he shouldn't win for The Aviator, which is a mind-numbing mess. Still, respect for the man's oeuvre could steal the statue from the more deserving Clint Eastwood, who at least got a good omen a few weeks ago when he received the Directors Guild top honor. APBs are out for Oliver Stone and Michel Gondry, who triumphantly ' and apparently futilely ' rode herd over two of the year's most complicated films.

Best Actor: Hasn't Jamie Foxx (Ray) won this already? The year has been one long victory lap for the showiest, most arresting performance of the year, and there's no reason the Oscars will be any different. It's sad to see Finding Neverland's Johnny Depp gypped by fate once again, but there's always his next performance. Sadder still, the Academy apparently only has room in its heart for one lunatic comedian; sure, he's no Robin Williams, but Jim Carrey showed amazing dramatic abilities in Eternal Sunshine of the Spotless Mind and should have been nominated. Ditto for The Passion's Jim Caviezel and Stage Beauty's Billy Crudup.

Best Actress: Saints preserve us from a revisitation of Annette Bening's Golden Globe acceptance speech for that hysterical harridan she called Being Julia. Fortunately, it looks like Hilary Swank's broken boxer from Million Dollar Baby will put up a fair fight and just might win the young actress her second Oscar.

Best Supporting Actress: Perennial critics' darling Cate Blanchett (The Aviator) has an almost straight shot. She's a great actress portraying a great actress, and Hollywood definitely relishes that sort of self-congratulation. But Closer's Natalie Portman is the kind of ingenue that Academy voters love to designate as heir apparent, and that puts her most assuredly in play. Who's missing? Claire Danes, for the electrifying Stage Beauty.

Best Animated Film: Pixar's incredible The Incredibles. It's the year's best action-adventure, served with a side of astonishing animation.

Best Original Screenplay: The twisted timeline of Eternal Sunshine of the Spotless Mind is hands-down the most creative construction nominated this year. If it doesn't win, Middle America has been right all along: Hollywood is indeed a godless moral vacuum that's going to be swept out to sea one of these days if it's not careful.

Best Adapted Screenplay: Sideways' fermented wine metaphors have a pretty good chance here, because the movie probably won't score big elsewhere. But the winner should be Paul Haggis, who came out of virtually nowhere to write the breathtaking script of Million Dollar Baby. The pure poetry of his writing and seamless storytelling stopped moviegoers in their tracks. Here's hoping Oscar was (and is) listening.