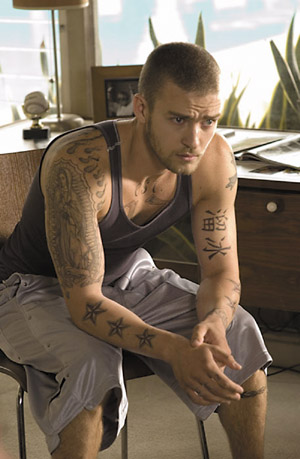 Despite entire atmospheres of hot-air hype, the dark and dystopic Children of Men isn't even the cinematic home of today's most disturbing coming-soon-to-a-future-near-you nightmare scenario. On that score, it's the uneven, explosive Alpha Dog that leads the pack.

In Men, writer-director Alfonso Cuaron deftly creates a decayed world of infertility and inhumanity, an existential no-man's-land symbolized by the fact that none of its residents is under the age of 18. That's a scary thought, no doubt. There is, though, something one step scarier, and Alpha Dog writer-director Nick Cassavetes has found it: the nowhereness of a wasteland world populated by too few people over the age of 18. The only thing worse than a physically disappearing demographic and all its attendant moribund metaphors is the stark spiritual loss of a restless generation, the semi-sweet and stupid youth we still have with us but manage to fail somehow.

Alpha Dog is just that kind of horror story. Cassavetes (known for famous parents John Cassavetes and Gena Rowlands and as director of the films She's So Lovely, John Q and The Notebook) based his script on the true-life tragedy surrounding the 2000 death of 15-year-old Nicholas Markowitz. Markowitz was simply a pubescent pawn in a dangerous game that he didn't understand. His older brother, Benjamin, owed a $1,200 drug debt to the now-infamous Jesse James Hollywood. To get the elder Markowitz to pay up, Hollywood and his crew decided to snatch Nicholas and keep him as collateral. Young Nicholas apparently found that captivity agreed him, as he got to party with the big boys (and girls) and simultaneously escape his parents for a few days. But ' bottom line ' Nicholas still had been abducted, and it slowly started to dawn on Hollywood that this was a potential problem with huge ramifications for his future. It's not too hard to figure out how this sad story ended with Nicholas' body discovered in a shallow grave.

It is, however, hard to watch Cassavetes' fictionalized speculation on how it all might have happened. Johnny Truelove (Lords of Dogtown's Emile Hirsch) is in the family business. He and his dad Sonny (Bruce Willis) deal drugs in California's comfortable San Gabriel Valley. He spends his time with a loose gang of friends: strong man Tiko (Fernando Vargas), silly man Frankie (Justin Timberlake) and subservient man Elvis (Shawn Hatosy). It's all fun and games and easy cash at first, but Truelove soon has a spat with junkie Jake Mazursky (Ben Foster), an unpredictable taut wire of a guy who owes Truelove money.

What starts as a one-on-one war of words begins to escalate, inching out of control in increments. Truelove gets Mazursky fired from his telemarketing job; Mazursky shows up at Truelove's house one night with a few friends to trash the place. Angered and cowardly (he hides in the bathroom with a gun while Mazursky and his mates wreak havoc in his living room), Truelove riles up his boys and, when they can't find older brother Jake but happen across his younger brother Zack, the gang grabs him instead. Frankie finds himself in the role of babysitter, an easy gig since Zack is so darned likeable and agreeable to this little kidnapping situation.

The film follows Zack's strange odyssey of liberated captivity, a vacation of pot and wine coolers and hot girls. He repeatedly assures the group he thinks of as his new friends that he won't run and he won't squeal. But after an irate telephone conversation with an unhinged Jake, Truelove starts to freak out when he realizes the stiff penalties that come with kidnapping. And so he tells his guys that they've got to kill the kid.

The showy structure of Alpha Dog detracts from Cassavetes' best strengths as a writer and director.

He uses split-screen shots throughout the film, usually for no discernible reason and with absolutely no emotional or artistic payoff. He also employs a tired TV-crew interview construct that, while it opens the film on a provocative note with a defiant Sonny browbeating the reporter, closes it on a jarringly and unintentionally humorous one as Olivia Mazursky (a completely over-the-top Sharon Stone) comes unbelievably undone in front of the same reporter.

Still, those flaws aside, Cassavetes coaxes impressive performances from most of his cast, many of them fairly inexperienced. Timberlake stands out for his nice-guy Frankie, the real sweetness that shines through his goofy gangster persona curdling when it becomes clear that he isn't going to stand up to Truelove and a newly invigorated Elvis.

But Cassavetes reserves his truest opprobrium for the mothers and fathers who walk through the middle of this tragedy heedless to the threatening chaos all around them. There is a real believability to the series of hedonistic pool parties, where parents in their black SUVs drop off kids at hotels without question because they're off to their own diversions. It's 8 p.m. and these parents know where their kids are; they just don't care to find out exactly what it is that they are doing.