The Little Big Cup, which specializes in the classic Louisiana plate lunch,' is representative of the tides of change now being felt in the tiny Cajun-French community.

When Interstate 49 was being constructed in the 1980s, the fact that the federal highway bypassed Arnaudville could have been considered a negative toward the area's economic development. Yet, as native Kevin Robin puts it, getting cut out of the federal roadway's path was actually a positive, allowing the predominately French-speaking community of about 1,500 a chance to maintain what he calls its "naïveté."

Kevin Robin and Sanjay Maharaj of The Little Big Cup

Robin is the owner of a new restaurant in Arnaudville called The Little Big Cup, which opened just over a year ago. Robin and his business partner, Sanjay Maharaj, a Trinidad native, are representative of what some residents are calling Arnaudville's renaissance, marked in part by a number of new ventures, including the Bayou Teche Brewery on LA 31, Tom's Fiddle & Bow Shop, the new NuNu's art studio and, possibly in the near future, a French immersion program in the old St. Luke's Hospital.

Robin is like many of the town's native sons and daughters who left their hometown after high school only to return in recent years.

"I lived in New York for about 20 years, but started getting the ahnvie to move back again about two years ago," he tells IND Monthly during a recent visit to his restaurant, which overlooks Bayou Fusilier.

Robin is no newcomer to Arnaudville's business community; he represents the fifth-generation to own Russell's Food Center, located directly across the street from The Little Big Cup.

Recalling the return to his hometown, Robin says the idea to open a restaurant came when his partner, Maharaj, asked the simple question: Where does one go for a good cup of coffee in Arnaudville?

"There wasn't a place," says Robin. "So we originally opened Little Big Cup as a little coffee shop. And it has just mushroomed from there." 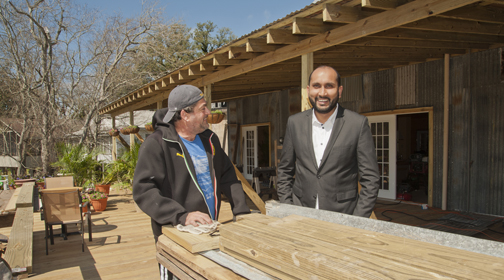 That little coffee shop has since become a restaurant, specializing in what Robin describes as "the classic Louisiana plate lunch."

"The idea was to offer something for people like my sister with kids, people with hectic lives, to be able to still get a nutritious, affordable meal," he says.

Now Robin is gearing up for the next expansion of the business. That development, for which construction is already under way, includes the erection of a massive wooden deck on the backside of the restaurant. Once finished, it will not only allow for al fresco, on-the-bayou dining, but will also be a place for entertainment, with open mic nights, an outdoor kitchen for cooking demos and a place for zydeco/Cajun dancing.

Like the town's other business owners, Maharaj and Robin welcome the idea of using the vacant St. Luke's Hospital building as 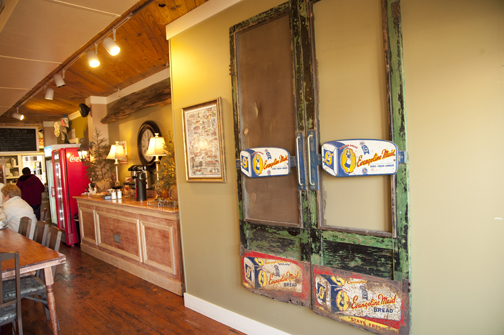 headquarters for a French immersion program.

"This project would only be a positive for Arnaudville's economic development and its business community," says Maharaj, noting, however, that the French immersion program is meeting some resistance from town folks (see related story, Page 6).

Robin, however, believes they will come around. Oftentimes, those against the unknown (and fearful of change) have more in common than they suspect, he says.

"I always joke that Sanjay, even though he's from another country, is more Cajun than I am," Robin says of his partner in business and life. "He's so devoted to family, food, music, and that love of family and culture, to me, is what being Cajun is all about."