In Click, Adam Sandler isn't careful what he wishes for and loses his control ' but not the control. 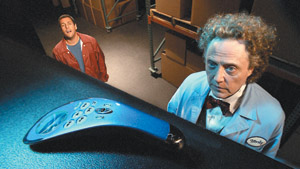 Click is a little bit of channel-surfing for the soul. It's got something for just about everyone, covering the considerable territory between madcap and melodrama in a mere 98 minutes. Of course, every remote controller who's never seen the beginning or ending of anything, just snippets of everything in between as the channels go round and round, knows there's a downside to hopping around this way, and that's a lack of cohesion. But whoever expects that from an Adam Sandler movie anyway?

The film's first half is a pretty typical Sandler outing, which means sophomoric, silly and more than occasionally funny. Architect-in-the-trenches Michael Newman (Sandler) never has enough hours in the day. He struggles to satisfy the demands of his ridiculous, bizarro boss (David Hasselhoff) in order to stay on the partner track at work, while routinely disappointing wife Donna (Kate Beckinsale), kids Ben (Joseph Castanon) and Sam (Tatum McCann), parents Henry Winkler and Julie Kavner, and even the family dog Sundance. His initial intentions are good ' he wants to get ahead so his family can live the high life ' but benign neglect soon begins to give way to something less sympathetic. Putting the "rat" in rat race, Michael never finishes building his kids' treehouse, cancels long-planned family camping trips, argues with his wife, misses his son's swim meet and finally has a meltdown one night when he can't figure out which remote control will turn on the television. His life too complicated, Newman is a stress machine, an unhappy heart attack waiting to happen, and he's headed for Bed, Bath & Beyond.

What he finds there is an odd character named Morty (Christopher Walken) who inhabits the part of the store cleverly called "Way Beyond" ' so cleverly that we hardly mind the glaring product placement. Michael caveats no emptor and heads home with a universal remote control, not realizing the device does precisely what its name promises to do: it remotely controls his universe. He discovers its divinity one night by accidentally muting the dog, and it's all fun and games for a while. He effectively skips spousal arguments, sickness, dog walks, traffic jams, foreplay, family dinners, all the things that were previously dragging him down. He colorizes himself and plays Barney and the Hulk before self-tanning in the car. He flashes back to his first date with his wife to gather information to get him out of a romantic jam. He mutes, pauses and split-screens his way through unpleasant encounters. This is where the humor reaches its lowest ' and truth be told, funniest ' points. Hasselhoff is a perfect target for Sandler's hostility, in all its foul forms; when he disappears in the third act, the film is less amusing for his absence.

Inevitably, though, the fun takes a turn, thanks to a combination of Michael's injudicious use of the device and its own self-education ' it's learning his preferences and acting accordingly. Things start to move too quickly, and life spins out of control. Using the remote to try to get ahead at work, Michael misses the decay of his marriage, his failing health, the growth of his kids (played as young adults by Dustin's son Jake Hoffman and Katie Cassidy). He wakes up one day sick, overweight and alone ' but at the pinnacle of his profession. Is this what he wanted? Suddenly, Morty doesn't seem like such a nice guy. Maybe he isn't.

For all its lopsidedness ' first half, funny until it's not; second half, sad until it's not ' Click has real value, closer on the Sandler spectrum to the goofily charming Happy Gilmore and The Wedding Singer than to the gratingly charmless Little Nicky and Anger Management. Screenwriters Steve Koren and Mark O'Keefe borrow from their Bruce Almighty playbook to mix humor and heart, and if Click is not quite as narratively successful as their Big-Man-Upstairs predecessor, it's no less entertaining.

There is an undeniable incongruity to the juxtaposition of Sandler's 12-year-old-boy humor (bodily functions, dogs overly enamored of stuffed animals, female anatomy) with the melodramatic morality play (anyone ever noticed that it's a wonderful life?) that Click becomes. But fans of the current cadre of Saturday Night Live alums (Mike Myers, Will Ferrell, Sandler) have come to appropriately appreciate a whole lot of stupid in their smart. Sandler is no Myers or Ferrell, to be sure, but he's funny, and audiences can tell that under all the bluster, he's a big softie. And that's why, despite all its self-generated static, Click works: the sweet center hidden beneath its hard-candy shell.