The wild Wachowski brothers seem to miss the larger point of the legendary graphic novel V for Vendetta ' but still manage to provoke and entertain. 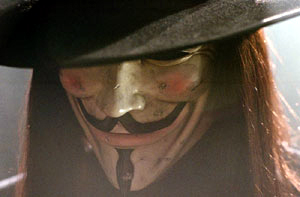 Let's start with a couple of things that V for Vendetta is not. It's not the epiphanic Matrix, but it isn't the trilogy-travesty, mind-numbing Matrix Revolutions either. It isn't slick and stylized, but it isn't poorly filmed either. At the end of the day, it isn't at all a terrible way to spend a couple of hours. But it also isn't what it could have been. And that's because V for Vendetta is not an altogether faithful adaptation of the groundbreaking graphic novel that Alan Moore penned and David Lloyd illustrated back in the Thatcher-Reagan 1980s.

Moore created a character, code name V, who stalks the streets of a dystopic, not-so-distant-future London in what at first seems like the pursuit of a very personal vendetta but rapidly becomes a call to revolution against the city's fascist overlords. He declares willy-nilly war on all those who exercise constant surveillance of the masses and iron-fisted control of "the news," all those who herd anyone "different" into camps from which they will never return, all those who seek to obliterate art and culture, all those who cling to power as though it were life itself.

V is an anarchist, not of the let's-break-stuff variety but rather of the let's-rethink-this-thing-called-government-because-maybe-we-don't-actually-need-it school of thinking. He is on a mission to show his fellow citizens the true and feral face of freedom, even as he obscures his own under a mocking, wooden Guy Fawkes mask. (Fawkes being part of the Catholic cabal who attempted to blow up the Houses of Parliament in 1605, an event spawning a British holiday and a sing-song nursery rhyme about the fifth of November.) V borrows Fawkes' visage ' and a few plays from his game book, blowing up prominent buildings to light everyone's way to enlightenment. Along the way, V meets/manipulates young Evey Hammond, who becomes the recipient of his truth and The Truth.

In the film version, starring Hugo Weaver and Natalie Portman, the details of this story are altered at will, but none do irreparable damage to the tale's overall construct. What does significant damage, however, is the Wachowski spin that is put on the story, a reconfiguring as insidious as anything V for Vendetta's Big Brother bureaucrats ever spat out on Moore's prescient fictional national network. The result is Moore's intellectually driven, big-picture political conversation as filtered through partisan, specific viewpoints.

Moore's V is a roiling reexamination of the age-old polarities of fascism and anarchy, an intelligent and ' as with most discussions of theory ' somewhat brain-bound debate. (But, of course, a debate with cool fight scenes and showy dialogue thrown in occasionally to keep everyone's juices flowing freely.) As a result, V for Vendetta is a tale without a hero ' its protagonist V is introduced as a villain, in fact. The fascists, while monstrous, are not mindless. Now do you start to see the knotted-up web Moore was attempting to weave? But the brothers grim take all that highmindedness and hard thinking and turn it into an only marginally clever caricature of our current political climate: conservative vs. liberal, Republican vs. Democrat. (Guess who the facilely drawn fascists are?)

V the film is, therefore, nothing more than a pedestrian application of only part of what Moore was trying to say. He was definitely writing about governments that lie to their people, abandoning them in pursuit of their own ends, and about people who, as a result, dissent in explosive ways. But his particular wisdom was the exploration of the idea that perhaps we are us and we are them, that perhaps systems are by definition corrupt, that it's easier by far to strike a match than it is to light a candle, and those are nuances the Wachowski script runs away from full-tilt. If only we were in charge, they bellow naively, the world would be a better place. V would not be pleased. (Better not to get him started, either, on the queasy quasi-love affair with Evey that the Wachowskis inject into the proceedings.)

He would, no doubt, be considerably more sanguine about the actor who gives him voice and so much more. Weaving (the Matrix movies, the Lord of the Rings films) offers up a performance of such inflection and physicality that you could almost swear the mask was arching that eyebrow or sneering that lip. He is the biggest reason to see V and still like it. Portman is pleasant enough and manages a convincing transition from quaking-in-her-boots drone to reluctant friend of V. Supporting players Stephen Fry, Stephen Rea and John Hurt add considerable heft.

Director James McTeigue, who served as an assistant director on the Matrix movies, crafts solid, even occasionally surprising visuals. His London is recognizable in all the right ways, yet a completely strange city at the same time. Unfortunately, his shot selections trend toward the shadows too often, and a final fight scene begs for a touch of Neo ingenuity.

If V the graphic novel had never existed, the film might play better. As it is, V the movie feels too much like a defacement of thought and art. Like the "justice system" V seeks to implode, it's just a maddening mutation of a once-beautiful thing.