Director Alejandro Gonzalez Inarritu's Babel is a poignant reminder that the things dividing the human race are not nearly as powerful as all that unites us. 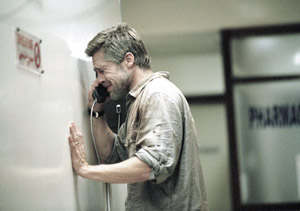 For a film whose title labors under legendarily cacophonous connotations, Babel is lovely in its silences. It's an odd ode to communication, this ephemeral film with its fundamental understanding of the all-too-often ways that words can sandwich themselves between the kinds of people we are and the kinds of people we want ' and ought ' to be.

Because both films deal with all the many strata of politics that always overlay interpersonal interaction, Mexican director Alejandro Gonzalez Inarritu's Babel has been widely compared to last year's surprise Oscar winner Crash. On one level, the comparisons are apt. Paul Haggis' excellent 2004 ensemble effort examined the cause-and-effect collisions of a disparate group of Los Angelenos over the course of two days; the result was a startling evocation of the high price of isolation, as well as of the central roles played by race and identity in today's increasingly fractured world. But as much as Babel has in common with Crash, the film actually brings more forcefully to mind another Best Picture a few years back: Anthony Minghella's The English Patient.

On the surface, it's easy to dismiss Patient as the epic, romantic Oscar bait that it very much was. And yet, in his most artful mangling of Michael Ondaatje's novel, Minghella managed to make a movie very much about borders, both the ones we draw on paper and the ones we draw around ourselves. "We are the countries," writes one of his main characters. "Not the boundaries drawn on maps with the names of powerful men. ... That's all I've wanted ' to walk in such a place with you, with friends, an earth without maps."

An earth without maps, where the person next to us can be as foreign as the person halfway around the globe can be familiar. A world where love and loss and children knit us together even as politics and rhetoric and anger tear at the ties that bind. A world where we can hear each other because we are each other. That is the world of Babel.

Scripted by Guillermo Arriaga (21 Grams, The Three Burials of Melquiades Estrada), Babel lightly weaves together four tales in four disparate locations. Americans Richard and Susan Jones (Brad Pitt and Cate Blanchett) vacation in Morocco; they warily circle each other, as they grieve the death of their infant son. When a sleeping Susan is shot through the window of their tour bus in the middle of open country, Richard is forced to seek help in the remote village of one of his tour guides. The United States calls the incident an act of terrorism; it's actually the thoughtless act of two young Moroccan brothers (Boubker Ait El Caid and Said Tarchini) engaged in a shooting contest. The siblings try to cover up their hideous mistake as the law closes in on their family and friends.

Back home, the Jones' nanny Amelia (Adriana Barraza) tries to find someone to take care of her charges Mike (Nathan Gamble) and Debbie (Elle Fanning) while she travels to her home across the Mexican border for her son's wedding. When she's unable to find anyone, she foolishly takes them with her, piling them into the backseat of the car of her unpredictable nephew Santiago (Gael Garcia Bernal). The trip into Mexico passes without incident; the trip out explodes into a nightmare of unintended consequences.

And finally, a world away from the rocky terrain of Morocco and the swirling dust of Mexico, we meet Chieko (Rinko Kikuchi), a deaf-mute teenager who wanders the steel-blue streets of Tokyo. She wears an angry shell, furious at how locked away from life she feels, furious about her mother's death. She is fierce and fragile. Eventually, Arriaga shows us her connection to the events surrounding the Joneses, but her tenuous tie-in to the larger plot is not what audiences will remember most about her. Chieko owns the last half of Babel, her silence and hard-won openness its truest heart.

In Babel, Inarritu regains the directorial subtlety he seemed to lose in the vertiginous 21 Grams. He's the intelligent presence hovering over the face of deep waters, his camera off-kilter, his visual and aural sensibilities shattering the screen. Arriaga's script perhaps turns on a few too many narrative coincidences. It's not the story of Babel that counts, though, so much as its emotional power. Inarritu and Arriaga show again and again how complicated and yet how simple we all are. A husband tenderly helps his injured wife with the most elemental of physical needs, and there is love and forgiveness in that unlikely moment. A boy becomes a man, braving the unknown in an attempt to spare his family. A father and daughter stand silently side by side, holding hands, staring out at the city-lit night. In Babel, there's no flowery language and few dramatic revelations. There are simply connections.