Snakes on a Plane is silly, slithery fun, a midnight movie classic in the making. 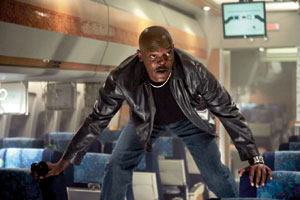 A bad movie that knows it is a bad movie somehow becomes automatically better. Perhaps by embracing its own essential badness, even reveling in its inherent absurdity a little, a film frees itself to be fun. Now, we're not talking about the ones that are bad in a Renny-Harlin, ginormous-plotholes, who-in-the-world-slapped-this-together kind of a way. Those kinds of bad movies ' the ones that take themselves seriously and expect us to do the same ' remain unacceptable and all too common. And we're not talking about them, at least not today. Today, we get to pretend like those nasty little buggers don't exist. Why? Because sometimes nothing under the summer sun is better than a deliciously outlandish story, an improbable scenario fully realized, and a troupe of actors bringing all their grit and gusto to a script whose artistic value lies somewhere south (way south) of Shakespeare. Today, we're talking about films that are stupid and silly and yet vastly entertaining. We're talking about Snakes on a Plane.

SoaP (even the movie's titular acronym is amusing) became a phenomenon almost as quickly as the first Web surfer came across its unlikely name. It's been the buzz of the blogs for months, a buzz that pundits delight in pointing out didn't exactly turn into boffo first-weekend box office. There are two answers to that. First, when you're making bad-movie, cult-classic history, who's paying that much attention to the money? And second, OK, even if bad moviemakers do pay attention to the money (they are moviemakers, after all), when your movie is named Snakes on a Plane, just how disappointing can a $15.2 million take actually be?

Star Samuel L. Jackson swears he decided to be in the movie just about as soon as he saw the title. He even reportedly fought to have the title changed back to Snakes on a Plane when some well-intentioned studio types started suggesting alternative, more conventional titles. But Jackson smartly saw the power of the punchy movie moniker. The name might not draw in mass audiences, but those who did come would know exactly what they were in for. It's simple genius, really, setting the film's serpent-filled scenes and campy tone in one fell swoop. Pacific Air Flight 121 just doesn't cut it, does it?

Surfer dude Sean Jones (Nathan Phillips) witnesses a mob hit in the wilds of Hawaii. You know how it happens, one minute you're riding your motorbike along twisty dirt roads draped in lush foliage and the next you're staring at a bloody body hanging upside down from a railroad trestle. Jones does the one stupid thing in the whole movie ' he runs from his hiding place while big-time bad guy Eddie Kim (Byron Lawson) is still on the scene, bashing away at our poor pendulous prosecutor with his baseball bat.

Of course, Kim spots him and sends forth his minions to find Sean at home. He'd be toast, too, if FBI agent Neville Flynn (Samuel L. Jackson) weren't lurking around on the patio. Flynn, of course, rescues Sean and requests his testimony against Kim in return. Somewhat reluctantly, Sean boards a flight to Los Angeles under Flynn's protection. Only problem is, Kim's connected enough to know what flight they're on and sends along a couple hundred slippery little surprises, who get conveniently jacked up on pheromones and are ready to bite.

Like all good horror and disaster flicks, SoaP has its share of characters: the pot-smoking members of the mile high club (guess how long they last), the snotty Brit businessman (Gerard Plunkett), the spoiled little rich girl (Rachel Blanchard) and her Paris-Hilton dog (guess how long it lasts), the nervous-about-flying newlywed husband, two kids flying sans parents for the first time ever, a rapper and his bodyguards (Flex Alexander with Kenan Thompson and Keith Dallas), a swaggering sexist of a pilot (David Koechner) and a long-suffering flight attendant on her last job (Juliana Margulies). On the ground are FBI agent Hank Harris (Bobby Cannavale) and snake expert Dr. Steven Price (Todd Louiso). All are fun and funny (even their names are bad, aren't they?) as the assassin snakes make their way through the plane in a frenzy.

It's an absolutely ridiculous premise, played to the hilt. Jackson talks tough and swears with spirit, the two things the man does best. When he gets angry, the movie really starts to get good. But the big stars are director David R. Ellis' attack snakes. They don't just slither; they stalk. They don't just bite; they bite in the most vulnerable of places and for extreme effect. They darn near take over the plane. Who wouldn't want to see a movie about that?