The fifth installment of the Batman franchise obliterates its predecessors. 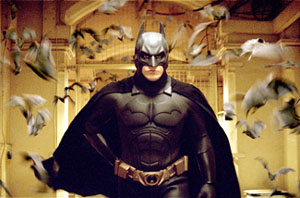 Who thought up the idea of turning over the reins of the Caped Crusader comic-book-movie franchise to indie it-boy Christopher Nolan? And what genius complicated matters further by casting a little-known British actor in the lead role of one of the summer's biggest blockbusters?

Whoever those guys are, we should find them and ' worship them. Batman Begins is astonishingly perfect; it is atmospheric, action-packed, elegant and ferocious.

In recent years, the Dark Knight has been brought to the big screen four times. Tim Burton attacked his two films (1989's Batman and 1992's Batman Returns) with a cartoonish carnality, his absurdist approach highlighting the characters' underlying eccentricities and alienation but largely missing that electrifying undercurrent of anger and fear. (The sort of steroidal sadomasochism and freaky feminism of Michelle Pfeiffer's Selina Kyle-turned-Catwoman was a gorgeous anomaly.) Burton's films seem downright brooding, though, compared to Joel Schumacher's Batman Forever (1995), which only really lasted for a moment and is probably best remembered for that knife-in-the-brain kiss-from-a-rose Seal song. Then came the nadir: Schumacher's 1997 Batman & Robin laid an egg, an overpopulated cavalcade of crap that was nine parts theme-park garishness and one part brazen stupidity. Remember the roller-skating bad guys?

No, Bats hasn't gotten his due on the big screen. Perhaps that's because Hollywood has never taken the most psychologically complex superhero of pop mythology as seriously as his legions of fans have for decades. Batman is a messed-up guy. He wasn't born in a galaxy far, far away only to land here with special powers (so he's no pursed-lip priss like the Man of Steel), and he didn't wake up with them one morning after an encounter with a radioactive arachnid (so he's no whiny navel-gazer like Spidey). As a helpless child, Bruce Wayne watched a criminal murder his parents, and the rest of his life has been about the fear and rage of that moment. A part of him still stands in that back alley, dancing with the devil in the pale moonlight. And so his alter ego is a self-made super man whose will to power places him a lot closer to the criminals he collars than to you and me ' or Joe Law Enforcement, for that matter. Just getting the bad guys isn't quite enough; Batman wants to scare the living daylights out of them. He wants to make them suffer. His super power is hate.

Cue Christopher Nolan, who directed and co-wrote Batman Begins. In retrospect, we should have known that the director of the mind-melting Memento and the restless Insomnia would know to plumb the darkest depths of the Batman character. Nolan's Batman opens with a nifty bit of time travel that allows us to simultaneously see Wayne's childhood trauma and its lingering effects. This beginning might be a bit slow for most action enthusiasts, but the script, co-written by David S. Goyer, understands that its primary purpose is to establish an underlying lore. And so we follow a young Wayne (Christian Bale) as he travels to the far side of the world looking for some kind of peace of mind and some kind of a future; he thinks he has found it in the League of Shadows, a band of decidedly unmerry men under the tutelage of the mysterious Ra's Al Ghul (Ken Watanabe), whose stated mission is to eliminate injustice and evil in one corner of the world at a time.

But Al Ghul's philosophy is of the uncompromising, destroy-a-village-to-save-it school, and Wayne assumes a rather Abrahamic role, arguing for the few righteous men left in the Sodom and Gomorrah of his hometown, Gotham. Venturing onto the moral middle ground where he will soon make his permanent home, Wayne decides that he might not have to save everyone, but he certainly doesn't want to kill everyone either. Needless to say, that causes conflict. Grasshopper soon leaves Al Ghul's mountain retreat a fiery ruin and hops a private jet back to Wayne Manor, where he proceeds to go Batty, bit by glorious bit. He is aided by an indefatigable, irrepressible Alfred (Michael Caine), a young, straight-arrow, not-yet-commissioner Gordon (Gary Oldman) and an impish, involved Lucius Fox (Morgan Freeman).

Nolan's script is smart. The evil plot that Batman ultimately must foil is simple without being simplistic and scary without being overblown. It propels the story, but never obstructs the enjoyment of watching the development of all those wonderful toys. And here's something most action movies aren't: layered. Catch that dialogue and all its implications as it flies by ' odds are you'll be meeting them again at some critical and poignant juncture. The maturity of the writing is matched by the fullness of Nolan's visuals, helped immeasurably by Insomnia cinematographer Wally Pfister. Batman Begins is beautiful, a perfect mix of the real and the surreal at play on a palette of copper, red and black. The film's signature shot says it all: Batman stands draped in his heavy black cape, high atop a skyscraper overlooking the glittering lights of Gotham. The music builds to a frenzy as the camera circles him, creating a totemic moment that tingles the spine.

The action is equally affecting. The elaborate, balletic choreography so ubiquitous since The Matrix gives way to down-and-dirty, raucous brawls. Like a vampire lurking in the shadows, the Caped Crusader plays a deadly game of hide and seek with his prey. This is no here-I-come-to-save-the-day heraldry. "Where are you?" one traumatized tough yells out. "Here," Batman rasps, suddenly just behind him, seemingly out of nowhere, upside down and poised to strike. The beefed-up Batmobile doesn't so much navigate the city streets as annihilate them. Frame after frame, Nolan captures the marvelous messiness of Batman's brand of justice.

And what a Batman he is; Bale is the best yet. The movie around him is so well-structured and well-executed that having him there is like finding chocolate in your peanut butter. It's just too good to be true. George Clooney's sardonic sexiness never quite fit the bill, and Val Kilmer came off a bit blank. Michael Keaton (Batman, Batman Returns) might have made us believe Bruce Wayne was a little crazy, but the requisite rage didn't come with the Batsuit. Bale's Batman simmers with it, just another American psycho. His Bruce Wayne is pure Patrick Bateman, his billionaire playboy antics a desperate cover for what lies beneath. And when he dons the notably nipple-free costume, in a wise and very à-la-Keaton choice, Bale lowers his voice to a ragged, harsh bark; all that darkness and gallows humor just shoots from his eyes. He is protection personified to those righteous few left in Gotham and hell on everybody else.

How lovely that this pristine piece of pure pop art bears the title Batman Begins. Some Burton guy made a few Batman movies you say? And who is this Schumacher you speak of? Doubt it not; the Caped Crusader commences right here. At long last, Christopher Nolan's visceral, vicious version obliterates all that has come before.