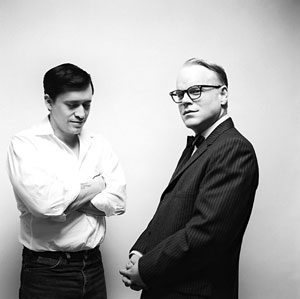 The most important thing you will almost not notice about Capote is how hushed a film it is. The wind whispers through the wheat of a Kansas field on a gray November day. A car sits silently sputtering outside a solid farmhouse that seems to tower over the emptiness of the surrounding prairie. A fresh-faced high-school girl knocks tentatively on an unanswering door before she hesitantly pushes her way inside.

What she finds will change her town and her time and will reach out for the talents of a man half a continent and a whole universe away, among the glittering lights and boozy cocktail parties of New York literary society. What she finds ' and the events and revelations that follow ' will build to a slow crescendo, finally spilling out onto the pages of Truman Capote's non-fiction masterpiece In Cold Blood. In his stunning feature-film debut, director Bennett Miller captures this watershed moment in American life and American letters without the usual drama tricks and Hollywood fanfare. Capote is a quiet, stately film, a brilliant centerpiece performance from Philip Seymour Hoffman anchoring a spare and powerful script. Miller largely eschews musical overlays or any kind of manipulative story structure; he doesn't tell us, so much as show us.

The year is 1959, and Capote (Hoffman) enjoys the celebrity and notoriety that follow his new novel Other Voices, Other Rooms. Then one day, reading The New York Times, he comes across a news item about the murder of the Clutter family in Holcomb, Kan.; he carefully clips the story from the paper and calls New Yorker editor William Shawn (Bob Balaban). "I think that's what I want to write about," he says in his soft, odd voice with just a touch of a lisp and a tinge of Southern drawl. And just like that Capote is off to the heartland with childhood friend, research assistant and novelist-about-to-bloom Nell Harper Lee (Catherine Keener) in tow. Once in town, Capote quickly realizes that a piece for The New Yorker about the effect the killings have had on the town won't suffice, that he wants to do more. What he doesn't realize is that he is signing away the next few years of his life ' and a precious piece of his already battered, beautiful soul ' to create a new genre, something he called a "nonfiction novel" and what we call today "literary journalism."

Capote was a brilliant writer, his lean and mean prose popping off the page. But the New Orleans-born and Alabama-bred author was also an insecure and snarky star. In his beautiful, soul-of-simplicity scriptwriting debut, actor Dan Futterman (Judging Amy, Will & Grace) creates the quite plausible idea that the world is a big cocktail party to Capote and that human foibles ' his own and others ' are just fodder for his next life-of-the-party monologue, packed with stinging and merciless wit. He wants people to love him, but he doesn't really want to ' or can't ' love people. So he plays them, until they dance to his own tune. In Kansas, Capote begins to do what Capote does best (and does what probably made him such a deft, dynamic writer): he insinuates, manipulates, observes. Humphrey Bogart and John Huston stories start to win over the Kansas sheriff (Chris Cooper) and his wife. A little glimpse of his past (and present) full of abandonment and loneliness preys on the sympathies of a high-school girl who holds a key piece of information. And, finally, an offer of friendship and seeming respect to the convicted killers (Clifton Collins Jr. and Mark Pellegrino) that turns into cold-blooded emotional bullying at a crucial moment. His deceptions are too complicated to be called purposeful. This is just the way he has always lived his life, trading on a personality that is a hard-fought distillation of inside information and otherworldliness. But now he suddenly swims in much deeper, darker waters, and the deceptions are beginning to drag him down.

Perhaps this is too one-sided an interpretation of Capote's character. The idea that In Cold Blood made Truman Capote immortal as a writer but ruined him as a man can easily be called into question, historically speaking. But the process of writing the book changed him, and it hurt him. Futterman and a fey, artful Hoffman have explored that weakness fully, hitting on something that feels oddly like the truth. Unlike so many who play well-known characters (Jamie Foxx in Ray comes to mind), Hoffman deepens his portrayal past mimicry, down to blood and bone. We pity his Capote, and we admire him. We like him almost as much as we loathe him. And Miller, with the wisdom of a director far beyond his experience level, never gets in the way of this shattering, subversive transformation. Because Hoffman's already-award-winning (and Oscar-favored) performance may be the very soul of Capote, but it is not its only substance.