Two different Adam Sandlers and a flimsy script doom Reign Over Me. 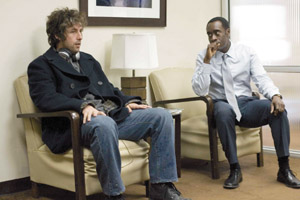 Reign Over Me is a strange, confused, embarrassing and uncomfortable movie. Granted, the character Adam Sandler plays is supposed to be a mess, but writer-director Mike Binder lets him run amok with his performance, and the result is part Punch-Drunk Love Sandler and part Happy Gilmore Sandler. The two personas don't go well together.

Sandler plays Charlie Fineman, a bed-haired recluse dealing with, or not dealing with, the loss of his family in the Sept. 11 tragedy. Before that day, he was a successful Manhattan dentist with a wife and two daughters. Ever since, he's been shutting out the world with big headphones, riding around the city on a motorized scooter and vigorously remodeling his kitchen. He also immerses himself in video games and Chinese food.

He's spotted on the city streets by Alan Johnson (Don Cheadle), a fellow dentist and former college roommate. They just happen to bump into each other not once, but twice ... in Manhattan. You can't find somebody if you're actually looking for them in that vast city, yet these guys just keep meeting up. I know, I know, it's supposed to be some sort of Hollywood take on fate bringing them together, and we're supposed to roll with it 'cause it's a movie.

The two start hanging out (much to the chagrin of Alan's "nagging" wife, played as well as she can be played by the underutilized Jada Pinkett Smith). Things go fine for spells; the two play video games and go to Mel Brooks marathons. Alan starts to get hooked into Charlie's life of carelessness, envying his lack of responsibility. That is, until he asks Charlie about his family. When that pivotal moment occurs, he gets root beer thrown in his face while Sandler goes into a Happy Gilmore rage sans the golf club.

Sandler is alternately decent and awful in the movie. A breakdown scene in a doctor's office is the finest dramatic work he has turned in so far. This great moment is drowned out by terrible sequences such as Charlie's courtroom breakdown, when he puts his headphones on and sings The Who's "Love Reign O'er Me." Charlie is kicked out of the courtroom by the judge (Donald Sutherland) for disturbing the proceedings, but his most grievous crime is a horrendous Roger Daltrey impersonation.

Cheadle does what he can with a thankless role. He and Sandler have moments together that work just fine, even though the material is awful. There are absolutely ridiculous and improbable moments in this movie that most actors would overdo, but Cheadle plays them to the point where he almost makes diamonds out of dust. Almost.

In what could stand as one of the more humiliating roles of the year, Saffron Burrows stars as a crazy woman who wants to give sexual favors to Alan, because she saw him in the elevator and sensed he needed help. She schedules an appointment for a veneer and offers up all kinds of fun. Binder tries to steer her toward being a sympathetic character by making her a love interest for the equally crazy Charlie. One just winds up feeling very scared for Charlie.

Reign Over Me is just too much. It's one of those movies that keeps screaming, "I'm a message movie!" and you just want to scream back, "Enough already! While I know I have a negative disposition, I don't want to die just yet. Spiderman 3 is coming out soon, and if I were dead, I'd miss it!" Or something along those lines.