For a film layered with instances of elaborate one-upmanship and trickery, The Prestige's plot devices are puzzlingly transparent. 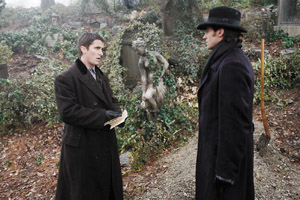 There is a certain, well-documented honor among thieves, but if novelist Christopher Priest is to be believed, precious little exists among magicians. Strange, when you think about it, since magicians are just thieves of a more intellectual and spiritual stripe. They steal our senses, making reality work against us, turning sight and supposition into the most intimate of enemies.

The larceny of the duelling magicians in Priest's 1995 novel, The Prestige ' now adapted for the screen by the inventive indie director Christopher Nolan (Memento, Batman Begins) and his brother Jonathan (who wrote the short story on which Memento was based) ' doesn't stop there, however; Robert Angier and Alfred Borden spend a Victorian lifetime plundering material from each other and gypping themselves out of any real soul freedom, caught as they are in a careering game of guile that concludes with one of them dead and the other in prison. Magic stopped being a parlor-trick performance art to these two a long time ago and became something else entirely. An unhealthy obsession, a maleficent means to an end ' their own eventually, hopefully somewhere near the top, but each other's first, preferably somewhere below the bottom.

Angier (Hugh Jackman) and Borden (Christian Bale) begin as friends, two up-and-coming showmen working together as they learn their trade. It's a magical pairing, and only that ' Angier is an artsy aristocrat with a natural flair for the stage and an inbred sense of superiority; Borden's a working-class scrabbler, his impatient wits quicker than his intermittent charm. One night, an onstage stunt goes horribly wrong, and the two become bitter enemies.

If all their world's a stage, it isn't one big enough for the two of them. Each goes his separate way, Borden with wife Sarah (Rebecca Hall) and Angier with manager Cutter (Michael Caine) and assistant Olive (Scarlett Johansson). But they can't stay away from each other for long. Linked by their distant tragedy, they share a mutual obsession with besting ' or busting up ' the other's feats of fancy. Both begin to show up unexpectedly on the other's stage, usually with bloody results. When Borden debuts a trick he calls "The Transported Man," Angier retorts with his version of the same trick, subtly dubbed "The New Transported Man." And so begins a labyrinth of increasing deceit, betrayed love and single-minded obsession. Determined to pay back Borden for the events of that night long ago, Angier's revenge isn't ultimately served cold, but rather with the flaming, Frankensteinian electrical bolts of a magic machine built for him by the maverick inventor Nikola Tesla.

As with any Christopher Nolan film, the timeline is treacherous. The script opens with Borden rasping, "Are you watching closely?" ' and then begins at the end. We're watching, only we don't know what it is we're seeing, just like a good magic trick. Unfortunately, the film doesn't sustain that kind of equilibrium-upsetting vertigo. It does, however, showcase two actors pulling much more than just rabbits out of their hats.

Jackman (X-Men, Kate & Leopold) is an intriguing actor whose best work has perhaps been done in Broadway shows (Oklahoma!, The Boy From Oz); The Prestige is the first film that allows him to place his acting smarts right next to his matinee-idol good looks. He delves down and finds true darkness and emotion for his Angier.

As solid a performance as Jackman delivers, Bale is the more interesting study. The young Brit is singularly unafraid to be completely unlikeable onscreen, and that has paved the way for a résumé replete with tour-de-force turns: American Psycho's murderous yuppie Patrick Bateman; the obsessive, depressive, excessive Trevor Reznik of the too-often overlooked The Machinist; a Batman finally fueled by all the rage that creator Bob Kane intended. Bale is willing to bare those patrician lips of his, snarl out his lines and get his hands dirty. His best scenes in The Prestige are saved for his deteriorating marriage to Sarah.

Nolan is an amazing director. He pulls top-flight talent from his cast (even Johansson, whom he uses just enough and in the just right way) and films a movie about darkness and deception that manages to be full of lovely light. So the problem with The Prestige lies in its inexplicable script. The story doesn't daintily drop bread crumbs for the audience to follow ' it chucks whole loaves of bread over its shoulder, forcing us to bob and weave to stay with it. If we're watching closely ' as we're admonished to do ' then there are no tricks left by the third act. In magic parlance, there is no "prestige," no great reveal.

Nolan's too smart not to have done that on purpose. But why? We are left, unsatisfied, with few clues. He sets us up to want magic, and then coldly continues to undercut his own offer. The perfect sleight of hand? Or no sleight of hand at all? It's hard to tell.

There are two themes that variegate much of the film, and they are the uneasy pairing of self-sacrifice and showmanship. Perhaps by marrying a self-immolating script to such serious directorial flourish, Nolan is positing that, when it comes to The Prestige, they're simply the same thing.