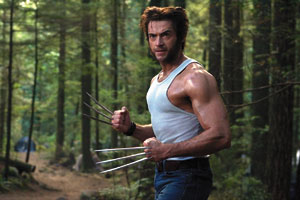 X-men: The Last Stand only works if you don't want too much. Its one truly inventive cinematic confection ' a bridge-bending, mind-blowing special effect ' goes down like gourmet take-out, but it only takes an hour or two for the rest of the film's empty-calorie evanescence to kick in. Part of the problem is the little game of musical director's chairs played by the film franchise; originator Bryan Singer (The Usual Suspects, Apt Pupil) helmed the first two installments, but left the set before the third, lured by the siren song of Superman Returns, which is slated for release at the end of this month. Director Brett Ratner (Rush Hour, Red Dragon) stepped in to complete the X-Men trilogy and save the day. Or not.

After a quick flashback hinting that there's more back story to the vanilla character of Dr. Jean Grey than we'd previously thought, Last Stand picks up shortly after the end of X2. Grey (Famke Janssen) is gone, crushed beneath the waves that flooded through the dam at Alkali Lake as she tried to save her X-friends. We can tell Cyclops (James Marsden) is still grieving because his hair is messy and he hasn't shaved in days. Wolverine (Hugh Jackman) grouchily fills in for him as a substitute teacher at the school for the gifted, headmastered by Charles Xavier (Patrick Stewart) ' although how Wolverine can weather soul-killing Storm (played by diva Halle Berry, who unfortunately negotiated a bigger role post-Oscar) is beyond comprehension. (At least he's got a cigar to chomp on in frustration; the audience is just stuck with her.)

Soon enough, though, our wonderful walking set of steak knives has bigger problems ' word of a mutant "cure" begins to circulate, a government-administered serum that will erase all mutations and thus restore harmony to the races. Of course, it will do this by completely eliminating one of them for all intents and purposes, but really, who's counting? Interestingly, this development occurs nearly simultaneously with the resurrection of Jean Grey as her raging, red-haired alter ego, Phoenix. Coincidence? Perhaps, perhaps not. But aren't we lucky that she comes back early enough to do in Cyclops and put audiences out of his moping misery? Oh yes, mild-mannered Jean's gotten a new groove, and this time she's a vampy, trampy, all-powerful sidekick to Magneto (Ian McKellen). Nobody ' particularly Xavier ' puts this baby in a corner. The series' other fatal femme, Mystique (Rebecca Romijn), should feel threatened.

As usual, the mutants can't band together and combat this notion of a cure because they're too busy fighting with each other. Magneto, predictably, goes on an unrighteous rampage ' "never again" is tattooed on his soul at least as indelibly as the concentration-camp number on his wrist. And so it's up to the X-Men to once again stand between Magneto's rabble-rousing forces and trouble-making mankind, even if some in their number ' the untouchable Rogue (Anna Paquin) ' contemplate the cure. Oh, yeah, and Iceman (Shawn Ashmore) and Pyro (Aaron Stanford) still hate each other.

All of which is all over the map, but wouldn't be so awful if the script, penned by Zak Penn and Simon Kinberg, weren't so awful itself. Major questions about the cure ' and its subsequent use ' remain unanswered. A young boy (Jimmy, aka Leech, played by Cameron Bright) whose superpower is to block other mutant's superpowers is introduced as the source of the cure, but common-sense questions abound on this front as well and are never addressed. Worse, the writers miss a chance to tell a relevant story about tolerance and diplomacy that's just crying to be crafted. Instead, the writing is sloppy, a mishmash of too-many-to-name X-Men characters (including Kelsey Grammer as Beast) who are introduced only to be thrown away.

And the supposed-to-be-heart-stopping second-to-last scene is a yawner, which is further undercut by the utter nonsense of the happy-ending conclusion that comes on its heels. (Although ' in Ratner's defense ' the final, final shot of the film piques audience interest once again.) But for a movie that ultimately kills off a handful of crowd favorites, Last Stand elicits few emotional responses other than indignation. Singer brought life and atmosphere to his two films, even if neither was exactly plot perfect.

Ratner makes his fake and automatic, as simulated as the war games that train the younger X-Men.

Last Stand feels like the troubled, artistic orphan it became when Singer jumped ship to spearhead the Man of Steel movie. So here's hoping this is indeed the last stand of the title, twisty ending notwithstanding. Judging from this effort, it's the last of the X-Men that we can actually stand. Superman Returns better be great, Bryan Singer. You owe us.