Life in Hollywoodland proved to be too much ' and not nearly enough ' for an actor named George Reeves. 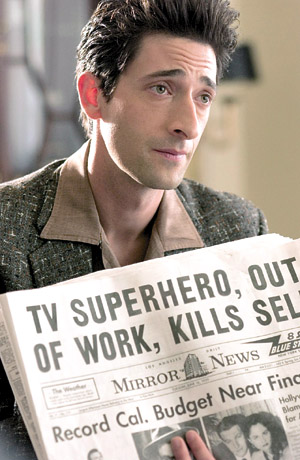 For a sad, unlucky few, the Hollywood Hills cast a silent shadow, dark and long. Not everyone gets a job inside the dream factory. For every starlet discovered at a dime store lunch counter, every leading man picked from a head-shot lineup, there are those hungry hundreds who never catch the right eye, never get the big break. Those aren't the sad ones, though.

What's worse, infinitely worse, are the ones who get a foot in the door, who rise a rank or two in the precarious pecking order of Tinseltown ' and then wobble there uncertainly, unable to move forward, unwilling to step back, in thrall to a deity that doesn't even recognize their existence. If legend is to believed, George Reeves ' TV's Superman ' was perhaps the most famous of all of these stillborn celebrities. And director Allen Coulter's Hollywoodland loves that legend.

As envisioned by screenwriter Paul Bernbaum (who also wrote the upcoming Lee Tamahori project Next), Reeves wants nothing more than to make a real go of it on the silver screen. A starving not-yet-artist, Reeves (Ben Affleck) hangs out in all the right places, finagling his way into society photos with Rita Hayworth and catching the eye of a curvaceous, carnal carnivore. Without realizing what he's doing, he quite literally charms the pants off Toni Mannix (Diane Lane), wife of MGM studio mogul Edgar Mannix (Bob Hoskins). The two embark on a tempestuous, very public love affair. (In one scene, Edgar and his mistress dine ' uncomfortably, of course ' with Reeves and Toni.)

Toni keeps Reeves living in high style, but the Iowa-born actor wants to be a leading man, not a kept one. Because he needs the work, he accepts a role as TV's Man of Steel, secretly hoping that the show will never see the light of day. Much to his chagrin, the serial is picked up, and he becomes a star. But not the kind he wants to be, not the kind he thinks he deserves to be. Bernbaum advances the trope that this Superman was able to leap tall buildings in a single bound, but not to land meaty roles and break out of his small-screen success. He's cast in From Here to Eternity, but his role is largely cut when test audiences recognize him as Superman. (History disputes this, with several major Eternity players ' including the film's director ' denying any such cutting.)

Eventually, his strange relationship with Toni runs its course, angering the bullying Edgar, as Reeves leaves the aging beauty for the young, audacious Leonore Lemmon (Robin Tunney). And then, one night, graying, dejected and out of work, he dies by gunshot wound in the upstairs bedroom of his Hollywood home.

Suicide? Crime of passion? Out-and out-murder? Bernbaum examines all the possibilities through the impossibly crystalline eyes of detective Louis Simo (Adrien Brody). Simo's a little down-and-out himself, a divorced dad and two-bit detective, halfheartedly working and half-scamming a disturbed customer (Larry Cedar) until the Reeves case comes along. Invigorated, he tries to find out the truth about Reeves and comes up against mafioso studio types, a conniving mother, a grief-stricken lover and the kinds of friends who probably just made Reeves feel more alone.

The Oscar-caliber casting of Hollywoodland is its strongest suit, by far. Affleck was born with Reeve's jawline and chin, but who knew he could muster such a miasma of ambition, frustration and stubborn self-delusion? His Reeves is defeated but fights defeatism, his disappointment quicksilvering into bewildered anger. Lane may well win the Oscar the Academy has long ached to give her for her brittle, brainy Toni; she is unrecognizable inside the spoiled lover she creates. And Brody, ever low-key, ever intelligent, infuses Simo with charm and bravado and brokenness, from the way he chews his gum to the way he talks to his son. Because of the muscularity of the film's leads, there is an airy, modern sensibility to Hollywoodland, a timelessness that banishes museum-quality, period-piece torpor and goes a long way to overcoming the film's considerable pacing problems.

Director Coulter has worked mostly in television, and it shows. Even though its actors manage to keep us mostly interested in where the story is going, the film lasts too long and leaks momentum. Of course, making a film about an unsolved mystery can leave your ending in a mess. And Bernbaum creates a bit of a muddle, before latching on to a curious, subtextual parallelism that he's diffidently drawn all along between Reeves and Simo. It's an indie-type ending to an otherwise almost mainstream offering, as ambiguous as the real-life demise of George Reeves.

The dark beauty of the truth ' and this Hollywood version ' is that we never really know what happened to Reeves. Questions remain unanswered; a thousand theories fit. Only one thing is clear. By dying with mystery, Reeves finally became more than simply a star; he achieved immortality in a way he never could have wished.