Director Clint Eastwood's Flags of Our Fathers attempts to show just how much gets lost, once truth is war's first casualty. 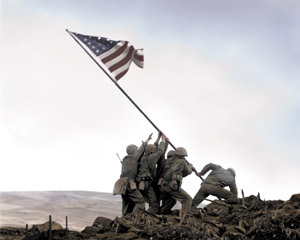 Flags of Our Fathers opens with the hoarse voice of a grizzled veteran pointedly observing that every jackass thinks he knows what war is about, most especially the one who's never fought one. It's a wry and refreshing opener, an insight too often missing from armchair representations of battle. But it's also a strange opening salvo for a film that, at times, winds up being almost exactly the kind of misapprehension that its early narrator decries.

The troubles begin before the film does. Its marketing tagline is "A single shot can end the war." Such a silly, throwaway sentence could be easily dismissed, if only it weren't the selfsame type of sloganeering and showmanship that sits at the heart of Flags' story. To accept even such clever wordplay is to accept the kind of hype that essentially shoved aside the men and the true story of the now-famous Iwo Jima flag-raising photo in order to raise morale and money.

Propaganda is one of war's many children and perhaps its most voracious. But to equate war with the stories that are told about war ' even in a movie marketing catchphrase ' is a lie, and that kind of dishonesty is only a step away from propaganda's sorry attempt to control the absolutely uncontrollable, its shyster treatment of an altered state of reality that the men making the movies and the men steering the official narrative rarely understand.

That tension is what Flags wants to be about; it doesn't quite win that fight. Based on the book of the same name by James Bradley and Ron Powers, Flags tells the stories of the men immortalized for being in and around that famous flag-raising photo; the film details their struggles on the warfront and then later on the homefront as they were trotted out before an adoring public by a cash-hungry government. Never mind that other men actually raised the first flag over Iwo Jima, a flag that drew cheers and ships' whistles, a flag that didn't make the photograph. The world wanted heroes, not complications. And so the second flag and the men who raised it became the only ones that mattered.

A runner during the Battle of Iwo Jima, Rene Gagnon (Jesse Bradford) sees the bond drive and his newfound stardom as groundwork for a better future. Soft-hearted, level-headed medic "Doc" Bradley (Ryan Philippe) handles the situation well enough on the surface but remains quietly haunted by a man he quite literally lost on the island. Native American soldier Ira Hayes (Adam Beach) has the hardest ' and probably most honest ' time, drinking, mourning and falling apart a bit too publicly for the public relations people.

The script of Flags, adapted by William Broyles Jr. (Jarhead) and Paul Haggis (Crash), is complexly structured; flashbacks flash back then fast-forward in a disorienting whirl. It's half brilliant, half bloody mess, thanks to an awful present-day bookend scripting device that overflows with homespun hokum and undercuts director Clint Eastwood's surreal, startling wartime scenes.

But where the film falters most is in its performances. Philippe (Gosford Park) sleepwalks, while Beach (Windtalkers) flounders. Too little emotion from one, far too much from the other, and happy-go-lucky Bradford stands in the mediocre middle. Truly excellent, mature performers like Barry Pepper (We Were Soldiers) and Tom Verica (TV's American Dreams) are relegated to heartbreakingly itsy bit parts.

Eastwood's film has no shortage of didactic points, and one of those is that, in a very real sense, the way the rest of us talk about a war can take something away from those who are fighting it. We call them heroes in misguided emotion and hang a heavy albatross around their necks. At the end of Flags, a son remarks that we call them heroes in an attempt to understand. But maybe we call them heroes and make muddy-minded movies like Flags so we won't ever really have to.

Ultimately, of course, it wasn't the famous feel-good photo of soldiers hoisting the American flag over the wasteland of Iwo Jima that ended the hostilities; it was the liquefying flashes of light, months later, that coursed through the cursed cities of Hiroshima and Nagasaki. Will we never learn that, no matter how moral the casus belli, war is never simple, and it is never good? It is a primeval djinn that once unleashed never, ever goes back into the bottle. To pretend otherwise, to participate even in a little popcorn propaganda, says next to nothing about the soldiers fighting the war and far too much about the lost public back home trying to make peace with what it is asking those soldiers to do.