The makers of Annapolis can't decide which yesteryear melodrama they'd most like to remake. 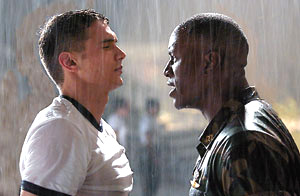 Annapolis is the best thing to happen to the 1980s since VH-1. When the ho-hum music network indulged in sweet, sarcastic homage to a decade previously thought unredeemably cheesy, it managed to make a culturally relevant name for itself in the process. Maybe the brains behind Annapolis thought they saw an opportunity to create some sort of big-screen simulacrum of this newfound nostalgia boom.

The film's set-up, after all, sends some of us straight back to high school: a blue-collar bad boy (All the Right Moves) with attitude and daddy issues to spare (Top Gun) struggles with inner doubt and outside pressure (An Officer and a Gentleman) in his first year at the storied United States Naval Academy. Oh, and he boxes (Rocky). But instead of using VH-1 smarts to harness the popcorn power of these kinds of cut-rate classics, director Justin Lin (Better Luck Tomorrow) and screenwriter David Collard (Out of Time) contentedly cherry-pick familiar scenes, themes and vibes and blindly blend them together. The cinematic smoothie that results is audaciously derivative and at times laughably anachronistic. But if you did love even a small part of the '80s, it's entirely possible to at least like Annapolis, too.

Young Jake Huard (James Franco) lives on the wrong side of the river, toiling with his father (Brian Goodman) in the shipyards of Annapolis, Md., instead of fulfilling his dearly departed mother's dearest dream and attending the naval academy he can see from his welder's perch. He spends his off time drinking beer with his buddies and boxing, until a fairy godfather appears in the form of Lt. Cmdr. Burton (Donnie Wahlberg), who grants Jake a last-minute letter of admission. Predictably, Dad doesn't understand Jake's choice but agrees to drive his surly son to the gates of the magnificent school in his beat-up pickup truck.

In a scene shamelessly lifted from Top Gun, Jake meets a hottie in a bar the night before he ships out for school. Sparks fly, and he completely (and predictably) embarrasses himself. Will they meet again? Of course, they will ' and she (Jordana Brewster) will turn out to be one of his Annapolis instructors. If you're going to steal, then steal from the best of the best, right?

Jakie-boy has trust and authority issues that surface pretty immediately. He sort of accidentally bonds with his out-of-shape, how'd-he-get-in roomie (Vicellous Reon Shannon), gets on the wrong side of company commander Cole (Tyrese Gibson doing his best Lou Gossett Jr.) without even really trying and manages to learn exactly nothing that he needs to know to stay out of trouble. A breath away from washing out of the program, Jake finally finds inspiration in the Brigades, a school-wide boxing competition in which all students are equal regardless of rank and in which he can go toe to toe with his tormentor Cole. Nothing less than Jake's manhood is at stake, and he can only save it by, gasp, asking for a little help from his friends. Cue the training montage.

In many respects, Annapolis represents the worst kind of filmmaking. Collard's script is undeniably lazy. While there is genuine humor in the mix, and the story ponies up a few unexpected developments here and there, too much of the script's overarching construct and far too many of the details are simply stolen from other movies. Director Lin (warming up for the third Fast and Furious installment and a planned remake of the 2003 Korean film Oldboy) does his fair share to keep the '80s flashback alive, his boringly straight shots punctuated only by blurry, frenzied boxing bouts.

Still, Franco (James Dean, Tristan and Isolde) is nearly as charming as Tom Cruise and Richard Gere were in their military movie days, and it's hard to resist the chip on his shoulder and the twinkle in his smirk. If nothing else, Annapolis reminds moviegoers that it's about time for Franco to join the big leagues and find a role (and a director) that challenges his potential. The rest of the cast stands shoulder to shoulder with Franco. Brewster plays the gal pal well enough. Shannon is adequately chummy as Jake's struggling fellow plebe, and Gibson is sufficiently menacing as the gung-ho, manlier-than-thou Marine Cole. The ensemble reminds us to care, even when the story forgets to. Basically, there's plenty enough here to pull audiences through who are just looking for a good time, and that's got to count for something.

After all, we still remember those lightweight '80s movies for a reason: They were cheesy escapism that made popcorn taste saltier and Friday nights feel freer. If nothing else, it's kind of nice to feel that way again, even if the rest of Annapolis fades from memory before you're two paces into the parking lot.