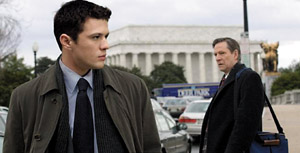 When Eric O'Neill reports for his first day of work in his newest assignment, there are one of two ways he could go. Literally. He steps through a door and finds himself facing two identically nondescript halls. The twin passageways seem to reach out forever into calculated, bureaucratic blandness. Neutrally colored walls, solid black doors, the glare of fluorescent lighting, nameplates with impressive-sounding but ultimately uninformative department names. There is no buzz, no hum, to this workplace. It could easily be anywhere, any-job USA.

It is, and it isn't. Underneath the quiet boredom, the oppressive sameness of these two halls, papers are pushed and beans are counted, yes, but federal crimes are also fought and state secrets are bought and sold and safeguarded. This is the strange, singular bureaucracy of the Federal Bureau of Investigation, a weird hybrid-world of institutional imperative and rugged individualism.

And so when Eric O'Neill reports for his first day of work ' and each day after that ' in his newest, make-or-break assignment, the young rookie on the rise could go one of two ways. His new boss certainly has, crafting a double-edged career: FBI loyalist by day, Russian spy by night. O'Neill is about to find out why he's standing in this particular hall on this particular day, and it's going to be the hardest thing that's ever been asked of him. He's going to be asked to help stop Robert Hanssen, a troubled, bitter agent who has been selling American secrets to the Russians for more than a decade.

Breach, the based-on-a-true-story movie O'Neill is living in even though he doesn't quite know it yet, is all about choices ' not so much why they get made as what happens once they do. In the screenwritten world of Adam Mazer and William Rotko, every day is a choice. We all do what we do, and while sometimes the causes can't be seen clearly, the effects inevitably always are.

O'Neill (Ryan Phillippe) is itching to be an FBI agent. He sits in alleyways and snaps counterterrorism photos, but also writes color-coded proposals for database improvements and shops them up the chain of command. His is the arrogance of ambition.

Hauled out of bed on a Sunday afternoon by a page from headquarters, he trades a quiet afternoon with his soft, sweet East German wife Juliana (Caroline Dhavernas) for a meeting with the brittle, no-nonsense Kate Burroughs (Laura Linney). Burroughs informs him that she's pulling him off his counterterrorism work and reassigning him to Robert Hanssen, an agent she classifies as a "sexual deviant," someone whose online activities could cause lasting harm to the bureau.

O'Neill's not happy with the new post, particularly once he gets past the gruff, sometimes volatile exterior of his new boss Robert Hanssen (Chris Cooper) and decides he actually likes the odd, religiously devoted man. It's only once O'Neill throws a fit that Burroughs clues him in to what's really going on: the largest FBI sting operation ever, a team of untold agents and resources all focused on catching a superspy in the act. And that superspy is his new mentor.

Director Billy Ray is fascinated by these true stories of overachievers-gone-wrong, as evidenced by his debut film Shattered Glass (2003), the story of fabricating New Republic journalist Stephen Glass. Both films focus on smart men who use their considerable intellect for nefarious purposes. Ray's unusual talent is his willingness to recognize these situations for what they are: not black-and-white morality tales that need to be wrapped up in neat packages, but messy, all-too-human anomalies with little rhyme or reason. He's less interested in the why than the who. Who are these men who mask so well?

Breach is all about the who. Chris Cooper delivers a tortured, mercurial Hanssen. He is more than one man at once, as believable as the Opus Dei Catholic family man who goes to mass every day as he ultimately is as the top turncoat of the 20th century. We can't tell which one is real ' because they all are. Showcasing a mixture of resentment, loneliness, self-belief and self-delusion, Cooper's is an Oscar-worthy performance wandering in the wilds of forgettable February.

Almost as interesting as Cooper's portrayal of Hanssen are Breach's subtle observations about the life of law enforcement at the highest levels. Linney's hard-shelled Burroughs bristles with dark humor when questioned about the solitary life she has chosen. Phillippe believably struggles with all the lies his character is forced to tell in the service of the greater good.

As his O'Neill discovers, on any given day, the FBI is a workplace where your boss can call you a hero or can call you an idiot. Maybe you get called both in the same day. And there really aren't all that many that you can't tell about it all. Because once you've chosen which way it is you want to go, those halls are mostly empty.