Outnumbered fighters exchange life for legend in the narrow pass of Thermopylae in director Zack Snyder's 300. 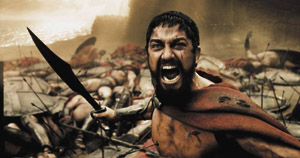 The triumph of Thermopylae lies in its tragedy. Or, one should say, in its tragedy and the triumphant telling of it. The annals of history have treated no single group with more enduring respect than the few hundred fighting men of Sparta who, in 480 B.C., accepted their fates and stood together to face an overwhelming army of invading Persians. It is the story of a proud few who made an impossible choice, who chose to break instead of bend when the gale-force winds of history crashed against their gates. Persia demanded the one thing the Spartans could never willing sacrifice: submission. That's the real-life stuff of legend, one single episode that's bigger than the sum-total adventures of The Aeneid or The Odyssey.

Think about it: The jealousies and whims of the mythological gods and their human playthings can be viewed on one level as the premodern world's cartoon equivalents, thunderbolt-throwing Tom and Jerrys taunting the fast-talking, put-upon Bugs Bunnies scurrying around down below. But Sparta and its ethos ' physical, disciplined, audacious ' are something else all together. They are history married happily to myth.

That stunning symbiosis (with all due respect to the incomparable scribe Herodotus) makes the last-ditch stand of a city-state's soldier-citizens a tale best told around a raging fire and, short of that, better told in the compressed, dare-we-say spartan comic-book compartments and larger-than-life sentences of a Frank Miller graphic novel. The now-legendary Spartans at Thermopylae fought for immovability; their lion King Leonidas fought for immortality. He was sure they were all going to die, but by the gods, they were not going to be forgotten. Miller (Sin City) was made to write just that kind of laconic, hubristic, heroic madman. His 300 is form and content feeding into each other (and off each other) in an impossibly perfect fashion. And yet, the movie of the same number proves it's possible to improve on that perfection.

How can that be? Because director Zack Snyder (Dawn of the Dead), in true homage to his Spartan subjects, proves unafraid to tempt a little fate himself. Just what rhetorical weapons he employed in order to convince studio executives to greenlight his green-screen extravaganza must have made for a Hollywood meeting for the ages. (If only we knew the details, perhaps we might have the makings of a modern-day epic.) Far from a slam dunk, 300 easily could have been cheesy and flat; other than the actors, little here is real in a three-dimensional, wrap-your-hands-around-it way. But like the men whose deaths it portrays, the film sits at a strange crossroads of yesterday, today and forever. Snyder has made a movie for the ages, a Matrix-like leap forward of talent and technology. Not all movies should be made this way, but here's hoping lots more will be.

300 looks like no other movie because it was made like no other movie. Freeing himself of budget-wrecking real-world sets and locations, Snyder cut costs by digitizing his directorial vision, crafting an epic look without the epic price tag. The move saved more than money; it is what keeps 300 from being a mediocre Troy or Alexander, or even the great Gladiator. The stuttering stop-start action sequences and the manipulated palette of the film's scenescapes ' the bloodstain-copper sky, the scarlet Spartan capes, the metallic masks and helmets and shields ' combine to lift 300 above concerns like authenticity and believability. The film is an active painting, awake with iconic imagery. A fresh-faced oracle swathed in gauzy sheets rises to perform a painful dance, coaxed from her rest by her repugnant keeper priests. A Spartan stands, silhouetted against the swirling sky, and, with one Herculean swipe, strikes away the quiver-full of arrows embedded in his shield. The strange and seductive giant king Xerxes towers over Leonidas, his palpable land lust fueling his mad march through Greece.

The actors very easily could have gotten lost in this land outside of time. It's a credit to each that they handed over power to Snyder, the wizard behind 300's technological curtain, and yet held back enough to be more than simply well-placed pawns. Phantom of the Opera's Gerard Butler roars his way through Leonidas, his wit and wisdom alive in every straining muscle. As his queen Gorgo, British actress Lena Headey enjoys an expanded narrative role for the film, every inch an equal to her warrior king. Rodrigo Santoro fills Xerxes with menace and a much-talked-about, mesmerizing pansexuality. They deliver their trademark Miller dialogue (and kudos to screenwriters Snyder, Kurt Johnstad and Michael Gordon for sometimes sounding more like the operatic, sardonic Miller than the man himself) with actorly abandon, just over-the-top enough to disturb their otherworldly surroundings.

The making of movies becomes increasingly cybercentric with every passing day. It's right and good to be wary of an equation that potentially moves the cinematic traditions of emotion, tangible texture and serendipity to the fringes of the fray. But 300, like the historic moment it seeks to portray, gives hope for higher ground.