Praise God and pass the chaudin!

Concession sales for Downtown Alive! begin at 5:30 at Parc International; the music cranks up at 6. Both events are free and food/drink sales help keep it that way so please leave ice chests at home. Below are the remaining spring 2013 schedules for these awesome downtown events. 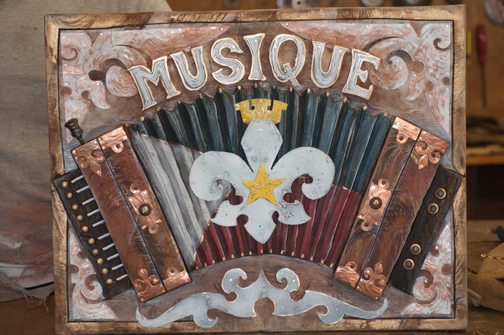 Bach Lunch is celebrating its 25th anniversary this year and to mark the occasion the Lafayette Science Museum Foundation will be raffling off a piece of artwork by popular local artist Kelly Guidry. "Musique" is a mixed media sculpture designed to hang on a wall. Tickets for the raffle are $5 apiece and can be purchased at the Lafayette Science Museum as well as at both Bach Lunch and Downtown Alive! concerts during March and April. The winner will be announced at the April 26 Bach Lunch. For details, call (337) 291-5544.