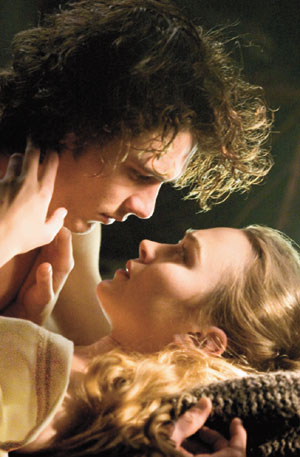 Tristan and Isolde isn't the worst movie ever made, and for director Kevin Reynolds, that's quite an accomplishment. Thanks to a monotone Kevin Costner and a sluggish story line, Reynolds' Robin Hood: Prince of Thieves put the "wood" in "Sherwood." Reynold certainly made sure Waterworld circled the drain. And his Count of Monte Cristo was a royal fiasco: poorly shot, poorly scripted and poorly received.

With a rap sheet like that, it's understandable that Reynolds' latest ' a retelling of the classic, tragic love story of Tristan and Isolde ' flies under the radar. It's really too bad because it's the most watchable film he's ever made.

Tristan and Isolde are the original heartbreakers, their legend stretching back to the mists of Celtic chaos. Even if you've never read the particulars of their story, you've still read their story, borrowed as its themes have been by bigger names like Arthur and Guinevere and Romeo and Juliet. England, if a loose confederation of bickering lords can be called that, is at war with the conquering Irish. Yes, you guessed it ' Tristan (James Franco) is the celebrated young warrior of a tribe of England, Isolde (Sophia Myles) an Irish princess. But like all good love stories, Tristan and Isolde is even more complicated than that. Throw in a sword dipped in poison and a case of hidden identity, all of which ends up with Isolde married to the very king (Rufus Sewell) that Tristan has served since he was an orphaned child. It doesn't take much to figure out where this is all going to end up. And with a set-up like that, it doesn't take much to keep it interesting.

Reynolds' forest fights and castle sieges might not achieve the dirty reality of Antoine Fuqua's King Arthur, but he manages to create a real world ' and a real sense of a world constantly at war. The actors are pretty much left on their own, though, when it comes to the love stuff. He lucks out because no one does a better full-on man-sulk than James Franco (James Dean, Spider-Man), and Sophia Myles (Underworld) is luminescent in her selfish love and, later, grief. Without these two, the romance that's supposed to be at the heart of the film could easily slip away, overpowered by Reynolds' obvious enthusiasm for the action sequences.

Still, the film redeems itself. The very heart of Tristan and Isolde, at least in this version, is stolen by Sewell's King Marke, a monarch in the making who dares a single moment of humanity, one the justice-loving Arthur and the hate-blinded Capulets and Montagues probably couldn't even imagine. It's all for naught, of course, but sweet just the same that there's absolutely nothing fair in this love and war.

Finding Forgiveness
End of the Spear retells the stunning story of a band of Christian missionaries killed in Ecuador in 1956.

The tale told in End of the Spear is not a new one. The story of five young Christian missionaries killed by the warrior members of a famously fierce Ecuadorian tribe was reported contemporaneously in Life magazine. Later, it was popularized in Through Gates of Splendor, a book written by the widow of one of the men killed. And in 2005, director Jim Hanon told the story once more in a well-received documentary titled Beyond the Gates of Splendor. Now, he returns to the big screen with this fictionalized version, End of the Spear.

It's easy to see why the story stays alive. Five men ' Nate Saint, James Elliot, Ed McCully, Roger Youdarian and Peter Fleming ' seek to befriend the incessantly warring Waodani tribe, first with flyovers and bucket drops and finally with a face-to-face meeting. This first encounter is peaceful, if fraught with tension and misunderstanding. It isn't long before fearful and distrustful Waodani men return and kill the foreigners with their spears. If that's all there was to it, then it wouldn't be much. What makes this tale so extraordinary is the fact that the widows and children of the murdered men continue to reach out to the tribe, some of them eventually living among the very warriors who ended the lives of their husbands and fathers. And through casual, everyday contact and kindness, these "enemies" become family, orphaned son and father's killer side by side.

Hanon can be forgiven, then, for not wanting to let go. It's just a shame that his feature filmmaking abilities don't match the power of these people's true stories. Spear doesn't have a professional polish, its look and feel a little too made-for-TV. The movie nearly drowns in its own relentless and random-sounding score. The cast ' whose biggest name is small-screen star Chad Allen (Dr. Quinn Medicine Woman) ' manages to be stiff and yet melodramatic all at the same time. It's a testament to the power of this true story that Spear stirs any emotions at all.

End of the Spear attempts no deeper discussion of the dynamics of missionary (or indeed anthropological) work. Others can argue if there is a point at which overt mission work can become meddling or, in extreme circumstances, contribute to the destruction of indigenous culture. Hanon seeks instead to tell the story of five men of faith who walked onto the banks of a rainforest river to try to stop a cycle of violence and did ' but only by dying. And that's a story worth telling again.