Writer/director Paul Haggis walks with the wounded In the Valley of Elah. 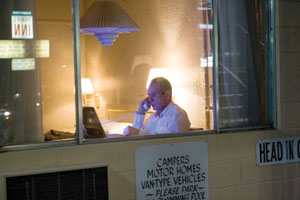 Bodies are not the only things broken in war. Human forms are maimed and destroyed in thousands of battle's terrible ways, but so are the souls they house. Sometimes, the body comes back whole; sometimes, the spirit does not.

If there is a universal truth about war, it is that its violence is a venom. War is an acid blade, slicing straight to the marrow of mankind and cursing those who experience it to carry its conflicts within. The goal may be noble, the aim holy and true ' the byproduct of battle is still a toxic residue of brutality and almighty sorrow. Even in the service of good, the unleashed dogs of war are vicious and terrifying and insatiable.

Retired Army Sgt. Hank Deerfield (Tommy Lee Jones) is awakened one morning by a phone call. His soldier son Mike (Jonathan Tucker) has returned from Iraq ' only to go AWOL, it seems. Not overly worried at first, the taciturn Deerfield spends his day repairing his gravel-hauling truck, waiting for a call or e-mail that never comes. When he decides to travel to Fort Rudd in New Mexico, he leaves behind wife Joan (Susan Sarandon) on a sleepy street in Munro, Tenn., the kind of suburban avenue that could easily be Anywhere, USA.

Once at Fort Rudd, Hank ' a former military policeman ' begins to try to track his son, meeting his friends, visiting his barracks and palming the cell phone he finds tucked away among his neatly folded Army-issue garb. Not quite content with the standard military response to searching for an AWOL soldier, Hank attempts to enlist the local cops in the search, specifically Det. Emily Sanders (Charlize Theron). The harried Sanders dismisses Hank's request for assistance, citing the usual cross-jurisdictional difficulties of civilian law enforcement in a military town.

Those cross-jurisdictional difficulties grow ' as does Sanders' attention ' when the remains of young Mike Deerfield are discovered in an empty field, his stabbed body dismembered and burned. Determined to find the truth behind his son's gruesome death, Hank helps steer Sanders' investigation, which pushes every step of the way against an insular Army bureaucracy. In the end, the answers they find ' about the military and about Mike and his tour of duty ' are only cold comfort.

Writer-director Paul Haggis' script was inspired by, but only loosely based on, the post-Iraqi-tour-of-duty stabbing death of a Fort Benning soldier, as detailed in a lengthy 2004 article by Playboy's Mark Boal. In the Valley of Elah, however, seeks to illuminate more than one soldier's tragic, stateside death. Ever enamoured of the cinematic examination of larger societal issues ' his race-relations epic Crash took home the 2006 Best Picture Oscar ' Haggis crafts a film that gently delves into the military-civilian divide, a film that roams the strip clubs and burger joints of an Army base town, a film of loss and grief that could be set anywhere and easily could be about any of our families. Every soldier he meets is unfailingly polite, professional ' and yet altered by their experiences in the war and the jolt of their return home. The more Hank finds out about his son, the less he knows for sure. The garbled videos pulled from his son's cell phone, the transmissions Hank so earnestly studies throughout his search, are perfect metaphors for the disconnect between the homefront and the warfront.

For almost the entire length of the two-hour film, none of this is done in heavy-handed fashion. Where Crash wore movie-with-a-message good intentions on its sleeve, the understated Elah maintains a surprisingly light touch throughout. This is largely due to the exceptional fire and fragility of Jones' performance. From his worried conversations with Joan to his encounters with fresh-faced infantry soldiers to the bedtime story he tells Sanders' young son, Jones finds power in understatement. There are no histrionics, no Oscar-baiting speeches, simply the grief of two parents who have now lost two sons in the service of country.

When Hank calls Joan to tell her of their son's death, Jones sits on the hotel bed, hunching his shoulders, rocking frantically back and forth, uncomfortable, uncomforting, stoic, shattered. He is, in that moment, a father without a son ' and an actor without equal. He never compromises his quiet vision, even if Haggis oversteps and undercuts his film's subtlety in the final frame.

It's a shame, that ultimate misstep. Because until then, Elah wasn't a movie. Elah was real, raw life ' and it could still be any of ours.