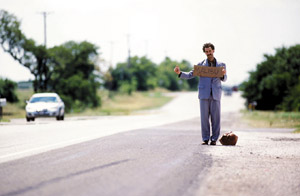 Sacha Baron Cohen doesn't care what you think. It's probably not personal; he's just got other things on his mind. Perhaps, for instance, how best and most expeditiously to exit a family-friendly rodeo arena that he's just single-handedly turned into the modern-day equivalent of a bloodthirsty Roman coliseum. How? Ostensibly by having his Central Asian character Borat mangle the Star Spangled Banner in front of hundreds of flag-waving folks. But, truthfully, by being wicked, smart and wickedly smart.

A British-born comedian, Cohen doesn't tell jokes; he commits them. Like crimes. At the rodeo, for instance, in a scene for the film Borat!: Cultural Learnings of America for Make Benefit Glorious Nation of Kazakhstan, he gets the crowd to cheer his support of "George Bush's war of terror" and the idea of utterly destroying the country of Iraq, expressed in increasingly violent language. He doesn't lose his crowd, however, until he unleashes his faux Kazakh anthem lyrics ' sung to the tune of the American national anthem ' about how Kazakhstan is the greatest country in the world and all other countries are run by little girls. Cohen-as-Borat, who steadfastly refuses to break character in public, reportedly needed an escort to safely leave the premises. This is what the closest thing comedy fans have ever seen to an actual Andy Kaufman successor does for a living.

Cohen is aided in his felonious fun by three alter-ego aliases: Ali G, Bruno and Borat. Ali G is a clueless white rapper wannabe who somehow convinces otherwise intelligent luminaries like Boutros-Boutros Ghali and Gore Vidal ' ones who should know better (or at least have people who know better) ' to submit themselves to his nonsensical interviews, in which he purposefully misunderstands, trivializes and obfuscates their points. Gay Austrian fashionista Bruno (soon to have his own film) has a favorite accessory, and it's flamboyance; he flirts the most amazing statements out of people. And finally, there's Borat, a bumbling television reporter from a Muslim backwater who tests the patience ' and political correctness ' of the unsuspecting Americans in his path, first on the small screen of HBO and now on the big screen in Borat!

Ali, Bruno and Borat have more in common than simply their seemingly fearless creator. Each is an elaborate exercise in complicity. Cohen is unafraid to look stupid; his interviewees rarely share that courage and thereby dig their own graves. Some don't want to be rude to a stranger; others perhaps don't want to be seen as uncool; a frightening few probably genuinely agree with some of the strange or terrible things that Cohen's characters say. But hardly any of them stop him, contradict him or correct him. And so you have Pat Buchanan seriously discussing Saddam's pursuit of BLTs (instead of WMDs) with Ali G or a car salesman in middle America guesstimating for Borat that a Hummer would be able to mow through a crowd of gypsies at about 30 or 40 miles per hour.

The movie Borat! differs almost not at all from the cult character. As Borat, Cohen's more outlandish statements usually have to do with Jews, gypsies, the mentally challenged, women and minorities ' most, if not all, unprintable here. For the film, Cohen and his team of writers ' including Peter Baynham, Todd Phillips and longtime Ali G collaborators Anthony Hines and Don Mazer ' simply create the flimsiest of narrative structures into which they sandwich Borat's Candid Camera-esque set pieces.

The Kazakh journalist Borat is sent to America by his government's Ministry of Information to report all that he can learn from the "greatest country in the world." He takes his mission seriously until, one night, he catches an episode of Baywatch on hotel television; cultural understanding is cut short by his newfound love for CJ (Pamela Anderson). And so he drags his unsuspecting producer Azamat Bagatov (Ken Davitian) willy-nilly to California to meet her. A stupid set-up, but one that affords our fictional reporter golden opportunities to road trip and encounter gullible comedy coaches, feminists, driving instructors, antique store owners, rodeo organizers, frat boys, Southern ladies and gents, and myriad confused hotel workers.

Borat! is gross-out comedy of the highest order, and we're talking physically, spiritually, emotionally. You will laugh, but you'll be glad you're sitting in a darkened theater when you do. The more scripted sections of the film bog down; Borat is much funnier when he's interacting with his unsuspecting public, conducting his absolutely psycho social experiment of boundary crossing. He shows us each other ' and ourselves. It's funny, not very pretty and at times brilliant.

Cohen still isn't quite a household name, or at least wasn't before Borat! In some ways, though, Cohen didn't actually need the film to become famous; he just needed the idea of the film. Borat! took on a life of its own, what with the real-life Kazakh government protesting Cohen's portrayal of the former Soviet satellite and a Turkish freelance journalist claiming to be the "real" Borat. (His mother must be so proud.) For a character that's all about the swirl of fact and fiction, these kinds of through-the-looking-glass developments might just be their own reward.