A Daredevil spinoff is surprisingly satisfying. 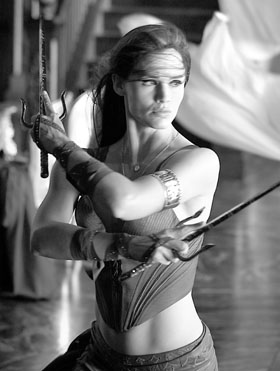 Elektra has "bad idea" written all over it. A director and star best known (maybe only known) for their work on the small screen. A spin-off of a secondary character from a movie that unfairly received a lukewarm-at-best reception two years ago. A three-person screenwriting team whose combined experience adds up to little more than the overloaded, underwhelming X2. With all that going for it, this movie should be a disaster. But like the scarlet-clad, super antihero whose adventures it chronicles, Elektra rises from its own ashes to stand as one of the most surprisingly successful comic-book movies to date.

The movie's chief ingredient is a heroine who, like all good comic book characters, lives in a very sad, very dark, very lonely place. Elektra (Jennifer Garner of TV's Alias, reprising her Daredevil role) has no real superpowers to speak of, just a childhood of loss and violence that she's channeled into a career as an ass-kicking assassin. Cut off from everyone except her chipper agent McCabe (Colin Cunningham) ' and her targets, of course ' Elektra is free to indulge her obsessive-compulsive tendencies, to brood over her mother's murder and to hone her skills with those scary skewers. The fire-engine-red suit she dons when she goes in for the kill is the character's greatest secret weapon. All flowing hair, laser stare and pouty lips, she is deadly and drop-dead gorgeous, a killer comic book archetype. Mourning becomes her.

The story has occasional gaps, but it's simple and efficient. Elektra is sent to kill a father (Goran Visnijc) and his daughter (Kirsten Prout), only to find herself protecting them instead from the Hand, a group of nasty ninjas intent on winning the battle of good and evil. Daughter Abby, it turns out, is a pivotal person in the global struggle against the forces of darkness. Abby good, the Hand bad, Elektra with one foot in both worlds ' quel comic book. Led by our conflicted protagonist, the white hats are aided, however enigmatically, by Elektra's old martial arts mentor Stick (Terence Stamp, brilliantly cast since he looks like a comic book character anyway). All of this makes for much melodrama and tons of psychology, armchair all the way. The story is told with perfect page-turner pacing.

Screenwriters Zak Penn (X2), Stuart Zicherman and Raven Metzner essentially wrote a comic book instead of a script. The team, aided by director Rob Bowman (X-Files), adheres to the inherent discipline of the comic book dynamic: its spare dialogue, economy of story, fleet rhythms and visual constructs. The dialogue is so true to form that it practically pops up in thought bubbles. When Elektra and her protectee passionately kiss and he passionately apologizes, she sardonically says, "Yeah, I hated that." And then she walks away. Holy fidelity to form, Batman; we have a winner.

Bowman and director of photography Bill Roe worked together on the moody, atmospheric X-Files, a history that no doubt helps to make Elektra a chiaroscuro playground with an otherworldly foreboding. But even better than the look of each shot is â?¦ each shot. Bowman and production designer Graeme Murray consciously crafted a comic book style, and almost no one has done it better. The result is a three-dimensional experience of a previously two-dimensional world, a cavalcade of perfectly framed snapshots that are a Marvel to behold. No opportunity is wasted ' from Elektra's action sequences to her flashbacks to the creepy council meeting of the Hand ' to point back to the page. There are a few minor missteps, a cheesy CGI snake scene and a few exaggerated catwalks from Elektra that make you wonder if she'd like fries with that shake. But what a small price to pay.

Most big-screen adaptations of comic books get caught between genre verity and special effects-driven action adventure pretensions. The result is a lamentable mish-mash of comic book conventions and characters shoehorned into a summer blockbuster mold. This can be entertaining and financially rewarding, but it's also a drift away from the visual and thematic purity of the comic book experience. These films either don't look right or don't feel right. As closely as the admirable Spider-Man franchise hews to Peter Parker's inner conflicts, its psychic divide unfortunately also infects the film's look, its uneven palette a frustratingly fatal flaw that would never occur in a good comic. Similarly, Ang Lee's The Hulk had good intentions, all sadly swallowed whole by the Charybdis of computer generation. And what has the big-screen Batman become? A gosh-awful Gotham nightmare fleeing the very form that gave it life. (Here's hoping the upcoming Batman Begins is truth in advertising.)

But for every attempt that falls short, there's one that shows an understanding of the soul and sensibility of the comic book. In 1990, director Sam Raimi's Darkman set the standard, starring Liam Neeson and creating a shot-for-shot Stygian surreality that's straight off the page. Ditto for Tim Burton's amazing Batman (1989) and the underrated The Phantom (1996).

In a comic book, everything that goes on in a frame is less than real and more than real. It's comic book. Who would have guessed that Elektra would be the movie to remind us of that?