It's a bird! It's a plane! It's ... another mediocre Superman movie. 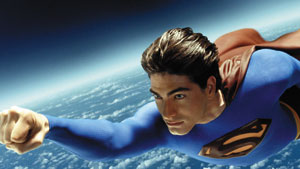 If Superman is so great, why aren't his movies better? Seriously, Krypton's last son, this most superior of superheroes, is supposed to not just fight for but embody truth, justice and the American way. Why can't Hollywood make that look interesting? Because it isn't; it's actually really kind of boring. Superman is a sweetness-and-light goody two-shoes who doesn't brood, and whose biggest challenge is hiding how sensational he is while pining for pain-in-the-neck reporter Lois Lane. He's not a human struggling to be more; he's an alien demigod struggling to be less. There's no self-sustaining story arc in that kind of sainthood.

Still, even without the more complicated dark rage of Batman or the evolutionary angst of Spider-Man, Supes has managed to stay a fixture on the three-dimensional plane. Movies, animated series, television shows ' name it, and Superman has had his shot. And yet, his presence on the big screen remains scriptwriting, scene-killing kryptonite.

The late-70s, early-80s Superman film franchise got so bad that Superman Returns director Bryan Singer (The Usual Suspects, the first two X-Men films) has chosen to act as though the last two of them never existed. Smart choice. Better to pretend that Richard Pryor and Nuclear Man were bad dreams instead of participants in actual plot lines. But it's not as though the first two were exactly templates to be followed by future filmmakers either. Endearing performances aside (Marlon Brando, Christopher Reeve, Gene Hackman), 1978's Superman and 1980's Superman II simply aren't viscerally exciting. They only work for audiences already in love with the legend; neither creates any myth of their own.

The long-awaited Superman Returns has the same problem. Singer and writers Michael Dougherty and Dan Harris (X2) try pretty darned hard, introducing a handful of mythological and spiritual references ' everything from Prometheus to Atlas to the suddenly-box-office-energized Jesus ' and attempting to introduce adult complexities to the Lane-Kent-Superman love triangle. But in the end, all their efforts are only so much window-dressing; Superman is still as unknowable as ever, a non-man who walks among us, except this time he almost dies and, oh yeah, he might have a kid. The writing never quite convinces us any of this is important, much less earth-shattering. The casting, even less so. What does it say when two small-screen versions (Lois & Clark, Smallville) do a better job on both counts?

Relative newcomer Brandon Routh, perhaps best known for a stint on TV's One Life to Live, dons the red cape and snug blue tights. And while many are infinitely grateful for that fact that this means Nicolas Cage did not (praise be!), Routh does little to rouse us beyond that point. He's cute with his little Brylcreemed curl, but he's plastic; instead of trying out his own characterization, he seems intent on just recreating the much-loved Reeve's bumbling Kent and kind of wry, righteous Superman. Which he does well enough, only it's minus Reeve's innate charm. Worse still, Routh has zero chemistry with the improbably cast Kate Bosworth (Blue Crush, Wonderland). Bosworth is too young, too lost as Lois Lane. She's not believable as a jilted lover, a mother or a Pulitzer-Prize winner. She's helped not one whit by a script that has her dragging along her 5-year-old son on investigative reporting jaunts, asking how many "f"s there are in "catastrophic," or dreamily telling Superman in their romantic reunion scene that she had forgotten how warm he was.

The best thing about the cast is Kevin Spacey, and when is the last time anyone said that? (Answer: 1995, for sure; 1997, but that's open for discussion.) Spacey is inspired as Lex Luthor, bringing a hysterical glee to his portrayal of the Man of Steel's main nemesis that the brilliant Hackman only ever hinted with his. This Luthor is having fun with his hate. With his spacy sidekick Kitty (Parker Posey), Spacey provides the film's only fire.

There are scenes in Superman Returns that work, but they are spread about willy-nilly. The film's start is frequently dull and slow. This could be attributed to an absence of Superman as the set-up is set up, but that argument collapses in comparison to the riveting, similarly hero-free beginning of Christopher Nolan's Batman Begins. Still, once he makes an appearance, Superman performs a few heroics that let the special effects crew show off, most particularly walking into howitzer fire head-on. The possibility of a Super-son is not without its intrigues. And when Luthor and his toughs bring Superman low with a kryptonite stiletto, there is an actual moment of pathos. But none of this is enough. For a good movie, that is.

It's all more than enough for the start of a new Superman franchise; a 2009 sequel has already been announced. Here's an idea ' maybe the Man of Tomorrow can fly around the world so fast that he reverses the order of things and the next couple of movies in this series actually get better instead of worse.