Breaking up might be hard to do, but it can sometimes be fun to watch. 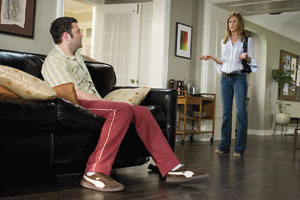 Brooke and Gary are an odd couple. This is partially due to the fact that Brooke (Jennifer Aniston) seems to have slightly strange taste in men. When she first meets Gary (Vince Vaughn), she's on a date with a couture-challenged Cubs fan. Seriously, the guy's kind of hard to look at. Gary spots her haughty hotness down the row and proceeds to make the biggest deal imaginable about buying her a hot dog she doesn't even want. And then, after the game, he slyly separates her from her date and browbeats her into having a drink with him, his multisyllabic motormouth stunning her into submission. Call her crazy, but... Wait, call him crazy, because that's exactly how he comes off. But ha-ha crazy, not psycho crazy, and so a short montage of happy-couple photographs later, Gary and Brooke own a prime piece of real estate together ' a Chicago condo ' and bicker like an old married couple. He's a video-game-playing, beer-swilling, sloppy working stiff; she's Rachel, for Pete's sake, a tan and tony goddess who works at an equally tony art gallery. However did this rose lose its bloom?

Still, such are the vicissitudes of our too-often ridiculous romantic lives, and so has it always been. Romeo and Juliet, Helen and Paris, Catherine and Heathcliff ' great lovers, paragons of passion, yadda, yadda, yadda. Who knows the true story of how these pairs got together? One thing's for sure, though, their legendary status stems simply from the fact that they just didn't live together long enough to fight about whose turn it was to take out the trash. Gary and Brooke, on the other hand, have lived together just exactly that long. Brooke is tired of doing the cooking, the cleaning and the entertaining and, apparently, quite upset that Gary never takes her to the ballet. Gary ' typical man (oh, start writing those letters, boys) ' just wants to come home from work, not really listen to his woman and play a few games of Grand Theft Auto in peace. Brooke's obviously been stewing about all of this for quite some time. And suddenly so much depends on the nine lemons he forgot to bring home for the dinner-party centerpiece.

Once the lid is off, forget about it. That's when The Break-Up begins with a vengeance, in one spectacular shouting scene. Gary and Brooke decide to call it quits, but neither wants to give up their now-unhappy home. So like all good lovers who find themselves on the outs but aren't sure if that's a permanent address or not, the dueling duo decides to drive each other absolutely bonkers. The results are fun, if forgettable, and in the end, they even occasionally stray from the formulaic.

Director Peyton Reed (Down With Love, Bring It On) doesn't so much take charge of the proceedings as just get out of the way and let his stars go for it. Vaughn receives a story credit to Jeremy Garelick and Jay Lavender's screenplay credits; many scenes feel as though he might be improvising a little dialogue, too. Which means that every other scene is worth the investment. Vaughn is chipper and quippy, and it's nice to see him reteamed with break-out buddy Jon Favreau (Friends, Elf). There is one highly amusing scene between the two guys when Gary appears to truly be losing Brooke and his bartending friend (Favreau) offers a questionable, conspiratorial plan of action. The comic dynamic between the two is as money as anything they gave us in the Doug Liman film that made them famous, even if our swingers appear to have swung ' and an awfully long time ago, at that.

Aniston is likeable as usual, even as she fluctuates between wanting Gary back and wanting him dead. Besides, it's only fair that we try to like her break-up movie, seeing as how we've stayed so fascinated with her broken-up life. (Her possible post-Brad hook-up with Vaughn does add considerable interest to watching the two battle it out on screen.) Supporting cast members ' the campy Judy Davis, the Arrested-no-more Jason Bateman, the truly strange Vincent D'Onofrio, the blink-and-you'll-miss-her Ann-Margret ' are nice to see, but tragically under-utilized.

Ultimately, The Break-Up works out for the best. It's good while it lasts, but everyone involved knows there's really no future in it. It's not a film to get serious about, but only a fun, finite summer fling. By the time audiences walk out of the theater, they'll be over it. And no doubt ready to see other people.