Two current releases have Heath Ledger playing for both teams ' as a genre-busting gay cowboy in Ang Lee's Brokeback Mountain and a legendary ladies' man in Lasse Hallstrom's Casanova. 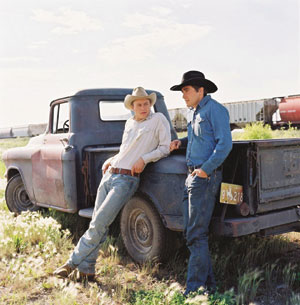 When a film has been hyped as much as Brokeback Mountain, it's easy to believe that it sounds too good to be true. And when a film has the kind of social significance that Brokeback Mountain strives for, it's even easier to believe that a lot of people (critics, awards organizations) will say it's good even if it really isn't. What a lovely surprise, then, to scrape away all the talk and sneak behind the statues to discover not just a good movie but a stunning work of cinematic art.

Based on an E. Annie Proulx short story that first appeared in the New Yorker, Brokeback tells the story of two drifter cowboys who meet on a job one summer in the early 1960s. Shy, separate Ennis Del Mar (Heath Ledger) has been on his own for an awfully long time; his parents died when he was young, and he was raised by his brother and sister until their own lives eventually pushed him out of the picture. His new partner Jack Twist (Jake Gyllenhaal) has known loneliness of a different kind; there's enough love lost between son and disapproving rodeo-rider father that Jack's taken to the saddle himself in some forlorn attempt at attention. After a lifetime of hard knocks and harder truths, Ennis and Jack are thrown together in the wilds of Brokeback Mountain by a gruff sheep rancher with an awful lot of rules (Randy Quaid).

Up on the mountain, the two begin to quietly bond through a steady diet of campfire food, a series of shared misadventures and a good dose of whiskey. The sheep rancher's biggest rule is that one cowboy is supposed to stay in camp, and the other is supposed to sleep down with the sheep. One particularly cold and drunken evening, Ennis decides to sleep it off in camp and check on his charges later. He lays shivering on the stone-cold ground near the fire's remains until Jack calls him into the tent. And when he lays down beside his coworker and newfound friend, his whole world suddenly shifts. Jack reaches for his hand, and Ennis reacts ' an initial millisecond of hesitation and angry confusion giving way to a hunger he will know for the rest of his life.

It's a life he and Jack will always live in the shadow of Brokeback Mountain. When the summer ends, the two go their separate ways. Ennis marries plain-Jane small-town girl Alma (Michelle Williams), and Jack eventually finds a match in rich and sassy Lureen Newsome (Anne Hathaway). But the two can't let go of each other, and it's a love that wrecks their lives apart and eventually their life together.

Brokeback was adapted for the screen by writers Diana Ossana and Larry McMurtry. The duo has written together before for television (Streets of Laredo, Johnson County War), but nothing that even glimpses the brilliant, spare sadness at the heart of this Golden Globe-winning movie. McMurtry (Hud, Lonesome Dove) has always put the wistful West to good use, and he knows how to make heroes of flawed men. But as strong as his writing here is, it would be nothing without the revelatory, reputation-making performances of Ledger and Gyllenhaal. Ledger (A Knight's Tale) just doesn't give anything away until exactly the right moment, his Ennis a tightly coiled, fiercely unhappy man whose small moments of happiness with Jack are as quiet as they are fleeting. He learned to stop asking for anything a long time ago, and he is too afraid to ask for more from the world than his regular "fishing trips" with Jack. Ledger's every move echoes this "if you can't fix it, you gotta stand it" mentality, a stunning transformation and one that has garnered Ledger much buzz and acclaim ' and rightfully so. But it's also a transformation that would fall flat without the foil of Gyllenhaal's more fiery, risk-taking Jack. No doubt ' Brokeback Mountain plus Gyllenhaal's star turn as a military misfit in last year's Jarhead equals big potential.

Director Ang Lee has always been known for pulling these kinds of complicated performances from his actors (Kate Winslet in Sense and Sensibility, the entire ensemble cast of The Ice Storm), but rarely has his rich visual sensibility come together with such a complete and well-crafted script. In the end, for all the hype, Brokeback Mountain is just a simple story of love and loss. Not gay, not straight. Just real.

For kicks, it's an interesting study in contrasts to see Ledger in Lasse Hallstrom's Casanova. Here, he hops the preference pond to play the most desired man in 1700s Venice, a skilled lover who, at one point or another, diddled most of that fair city's female population. (Including, in Hallstrom's naughty imagination, an entire wing's worth of Venetian nuns.) If Lee's Brokeback Mountain is a study in the gritty reality that love doesn't always bring bliss (in fact, sometimes quite the opposite), Hallstrom returns to his Chocolat roots to celebrate a few fairy-tale happily-ever-afters. It's a charming, lightweight romp in which Ledger (surrounded by Sienna Miller, Lena Olin, Oliver Platt and Jeremy Irons) does a competent, if unimpressive job.

But while Casanova shows Ledger's fledgling flair for courtly comedy, it's not exactly what we want for him after meeting Ennis. Ledger, unlike his unhappy creation, has to find a way to step out of the shadow of Brokeback Mountain and move on to a full, creative life. Time is on his side.