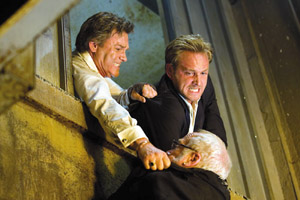 Director Wolfgang Petersen always misses the boat. He must, or why else would he return to the sea time and time again? The German-born director made his name with Das Boot, the 1981 classic that chronicled the complicated and claustrophobic lives of a German U-boat crew during World War II. Petersen set sail again with 2000's inaptly named The Perfect Storm, a tepid tempest in a special-effects-challenged teacup. Now there's Poseidon, his poor man's Titanic. Remaking the '70s audience favorite The Poseidon Adventure, Petersen admirably captures the coolness of the inverted-sinking-ship concept; his visual fictions are real enough to make summer movie audiences squirm in their seats. But bad dialogue, early melodramatics and pretty skimpy character development combine to keep Poseidon paddling in the kiddie pool of disaster cinema.

No one could have foreseen the near-cult status of the original. Critics panned it, of course, but audiences loved it. And what's not to love? The film is frighteningly fun and packed with straight-up stars like Gene Hackman, Shelley Winters and Ernest Borgnine ' the kind of quality that can (and did) render a second-rate script down-right memorable. What the early '70s lacked in special-effects mastery, director Ronald Neame almost made up for with creative shot presentation and a mind for the minutiae of intricately created sets. (OK, maybe that's overstating the original's case, but watch it again and see if it doesn't deserve mad brownie points for earnest effort.) And if imitation really is flattery in disguise, consider the long list of Poseidon Adventure pretenders that followed.

All of which makes Petersen's remake a little bit of a shame. Poseidon is fine popcorn fun on a hot and lazy Saturday afternoon, but it's forgettable ' which can't be said about the original. The new version is well-filmed and pretty tightly shot, but it's poorly scripted and, for the most part, simply can't rely on its cast to elevate the proceedings. The credits don't read like an Oscars who's who so much as a Love Boat manifest. It's not that anything is really flat-out bad (except, perhaps, select bits of dialogue); it's just that everything is mediocre.

Mark Protosevich's script, based on the novel by Paul Gallico, wastes little time, a fact that should work in his favor more than it does. Nobody wants a leisurely run up to that rogue wave, and Protosevich wisely dives right in. We see the ship, we momentarily meet the players, we spot the wave. There's definitely something to be said for that kind of story speed, especially in the action genre. But Poseidon founders early on.

There aren't any characters to really care about, save a stoic Kurt Russell (who we like because we recognize him) and a gambling Josh Lucas (who we like because he's hot and kind of James Bond-y). Early bits of dialogue just stink ' particularly anything that comes out of the mouth of the ship's captain (Andre Braugher) and the cartoony "Noooo!" that comes out of the watchman who first sees the wave. And when said wave rocks the boat and then some, Petersen employs a shocking glee in showing all the many ways that the passengers die. Formal-wearing socialites go splat in the multi-storied lobby, crew members float around like fish corpses in the fallen bridge, and workers in the hold get pan-fried by a flash fire. It's not nearly as horrifying as it sounds. It is, in fact, laughably extravagant. Petersen creates an unsubtle, unending montage of death ' he's obviously not interested in communicating loss of life but rather in demonstrating his own slightly evil technical prowess.

The film lightens considerably once our intrepid survivors band together and venture out on their own. The acting finds a livable level, and the action becomes increasingly scary as options ' and dry places ' start to disappear. Lucas (A Beautiful Mind, Sweet Home Alabama) shows a real future as a film hero, keeping things interesting as best he can. He's got an intense stare that promises the kind of dramatic dividends movie audiences mistakenly hoped for from Matthew McConaughey. But Lucas can't keep this ship afloat all on his own.

Go see Poseidon; just don't expect all that much. If campy greatness is what you want, rent the 1972 version. Then you'll understand just what it is about Petersen's so-so effort that turned water into whine.