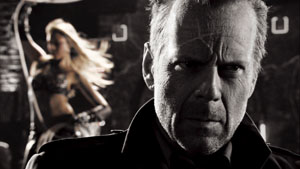 Sin City is a place where a man's darkest dreams come true. The town's most prominent residents might be shadows and pain, but in its midnight corners, bullets and beatings don't really slow anybody down, most everyone gets a second (if not third) chance, and a kind of pragmatic nobility occasionally swims to the oil-slicked surface. A two-time loser ex-con can stop a madman, and a psycho with a new face can fight for the woman he'll never really have. Amazonian supermodel prostitutes and strippers claim the territory of Sin City's Old Town and enforce their code ' touch, but don't trouble ' with swords and stilettos. An old man dies so a young girl might live. It works, this underworld, on its own terms and its own timetable.

The same can be said of the movie that goes by the same name, a modern classic sprung from the imaginations of a most unholy trinity: comic book icon and eponymous graphic novel series creator Frank Miller, indie-legend-gone-Spy-Kids Robert Rodriguez and that whinging, wonderful wild child Quentin Tarantino. Clocking in at a just-a-tad-too-long two hours, Sin City weaves together three of Miller's sickest stories (Sin City, The Big Fat Kill and That Yellow Bastard) to create a seamless tale of a frenetic, fraying world. Hard-bitten cop Hartigan (Bruce Willis) is a day away from retirement and a chest pain away from Paradise, when he decides to save a helpless girl named Nancy from a privileged pedophile (Nick Stahl). Marv (Mickey Rourke) is a tank of a man hellbent on avenging the death of a kind woman named Goldie (Jaime King); he only knew her for one night, but let's just say he knew her well, and he's willing to go as far as he has to in her name. Out-of-his-mind Dwight (Clive Owen) is crazy like a fox; when his confrontation with a bad cop (Benicio Del Toro) goes south and threatens to drag the girls of Old Town (Rosario Dawson, Jessica Alba, Alexis Bledel) into open warfare with both the police force and the mob, he thinks fast on his feet.

Experienced storyteller Miller (who cowrote the script with Rodriguez) keeps his hands on the wheel, steering these seemingly disparate stories in the same direction and creating a simple, sophisticated narrative that appears to be perfectly linear ' until, just like that, it brilliantly wraps back around on itself and creates yet another layer of perfection. The stars are as singular as the structure. Who would think to turn to a comic book movie to find such true ensemble solidarity? But there is nary a misstep, from Mickey Rourke's brutish, downright actorly turn as the menacing Marv to Bruce Willis' sardonic, David-Addison-on-a-dark-day Hartigan. Throw in a scene stolen by a reptilian Rutger Hauer, an over-the-top turn by Brittany Murphy, a typically atypical Benicio Del Toro performance, and Clive Owen's dangerous desirability, and what you've got is noir nirvana.

Which is not to say that the film skimps on the hyperreality of its comic-book, pulp-fiction roots. Maximum masculinity drips off these men as they burst through doors, take bullets and down booze. The women of Old Town are vicious, vulnerable vixens as ready to exact a pound of flesh as they are to flash one. Beauty and squalor live side by side. And underneath it all, there's an absurdity, a nihilism, a twisted sense of humor not for the faint of heart that's too dark to have originated anywhere other than in those colorful, compressed grids.

Sin City is comic book chic, more structurally and visually stunning than anything since The Matrix, more hopped-up than anything since the first Kill Bill. There has never been a film created quite like this one, with its amazing marriage of discipline and daring. On one level, Sin City is a great noir throwback, its brave black-and-white photography illuminating the script's thousand shades of gray. The things that really matter, however, even if only for a moment, come in color: a woman's lips, her scarlet dress, blood, fire, a flash of the eyes. Absolute, undying depravity has its hue, a radioactive, sickly yellow. Feigned innocence is as blue as a cornflower field in late spring. So maybe this is post-noir, darker and scarier and more colorful, both literally and figuratively. It's not like anything else, that's for sure.

Rodriguez, who shot and cut the film, visually captures the funhouse carnality of Miller's graphic novels. Forget just filming a successful big-screen version of a popular comic book. Somewhere in his mixture of live-action shots and green-screen sets, he has found the perfect way to film a movie: the cutting rain, the angular shadows, the frames so full of faces and foment and fluidity. In the end, Sin is an absolute virtue: seductive, deadly, terrifyingly original ' and more fun than a movie-goer is supposed to have.