If Fracture is the new standard, then television lawyer shows just may have ruined the big screen for barristers. 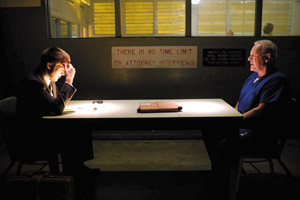 It's entirely possible that the omnipresence of the Law and Order franchise (and to a lesser extent its almost equally ubiquitous CSI sibling) is ruining the crime procedural. With so many cops and courtrooms crowding the air waves, the audience of armchair attorneys is bound to start learning how these writers think. We've all seen so much of this before, that a twist every once in a while would really be nice, an unexpected development to shake us up and make sure we're paying attention. Director Gregory Hoblit did it once before, with 1996's unpredictable Primal Fear. With Fracture, however, Hoblit has a less innovative story to tell.

Aeronautics mogul Ted Crawford (Anthony Hopkins) knows his wife Jennifer (Embeth Davidtz) is cheating on him; when he shoots her, it's not so much a crime of passion as one of precision. He's got his getaway all planned out to the last detail. So much so, that the young prosecutor assigned to the case, Willie Beachum (Ryan Gosling), races along like one of the marbles in the perpetual-motion-machine inventions that Crawford is always tinkering with in his office and home. Beachum, who's leaving behind the D.A.'s office for a cush corporate law job in a matter of weeks, thinks the case will be a slam dunk. And it soon plays out that it probably will be, just not for his side.

It's annoying that Beachum is supposed to be this brilliant trial lawyer. Screenwriters Daniel Pyne and Glenn Gers tell us that he is, but never show us, and so it's a little hard to believe, frankly, especially since he can't seem to figure out a key piece of evidence before the audience can. Still, Oscar nominee Gosling (Half Nelson) is fun to watch as he flails around, and Hopkins is never more mesmerizing than when he's playing evil, even if his character's smarts desert him in the end.

Ultimately, the plodding, transparent story of Fracture feels like little more than the excruciating elongation of an hour-long teleplay. The verdict is in: Fracture should be summarily dismissed.

What's in a Name?
In the Land of Women is as odd as its name, but infinitely more charming.

In the Land of Women has to be the dumbest name for a movie ever. It doesn't even sound like a movie title, does it? It sounds more like the name of a Star Trek episode where Capt. Kirk and company find themselves stranded on some desert-colored world peopled by Amazonian androids.

Dumped by his model/actress girlfriend Sophia (Elena Anaya), Webb flees Los Angeles to take care of the grandmother he doesn't really know all that well and maybe start writing that serious work he's been kicking around in his head for the past decade or so. Before long, the heartsick Webb meets and befriends the heartsick Hardwicke women across the street. Mom Sarah (Meg Ryan) struggles to find fulfillment in a philandering husband and her two daughters, the older of which hates her; she's also facing a fight against cancer. The hating daughter Lucy (Kristen Stewart) pouts, paints in the basement and climbs onto the roof at night to sneak cigarettes. Webb soon finds himself wrapped up in their worlds and their woes, attracted to both, appropriate for neither. And that's how the story goes: All these broken people bouncing off each other, hurting each other, helping each other, surviving everything, resolving nothing.

First-time feature-film writer-director Jon Kasdan (son of longtime writer-director Lawrence) creates a complicated, offbeat story. The dynamic between Webb and his demented, delightful grandmother could sustain a movie treatment all its own. Kasdan pens the Sarah character with empathy and hard edges.

But the movie's truest star is this little man who finds himself lost in the land of women. Adam Brody (Thank You for Smoking) is impossible not to like. There is vulnerability in his poor posture, coolness in his clever self-deprecation. He maintains a remarkable consistency in his character, subtly adjusting to act with three generations of fierce females yet never stepping away from who he fundamentally is. If Brody's a one-note actor (and Carter is very much reminiscent of The O.C.'s Seth Cohen), then his one note is as watchable as it gets. He makes In the Land of Women a place you actually want to be.