The boldest man in show business gets a few friends together for a raucous, righteous Block Party. 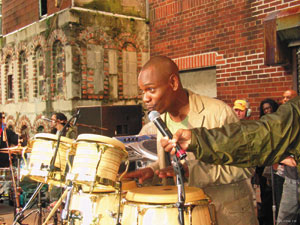 Dave Chappelle is so darned likeable that his amiability extends to anyone within a 10-foot radius. Even the big-ego-big-talent Kanye West starts to seem like a nice guy when he's in a certain proximity. So it makes sense that Chappelle, at the height of his fame and fortune in 2004 before he walked away from a $50 million dollar deal with Comedy Central, would have wanted to use a little bit of that fame and fortune to â?¦ throw a party for a few thousand friends and fans. And to pay for director Michel Gondry (Eternal Sunshine of the Spotless Mind) to record the event and the days leading up to it for posterity.

Chappelle, who rocketed to rocky stardom via the creation of his whip-smart and close-to-the-bone Chappelle's Show, just wants to put on the show he always wanted to see. So he decides to host a block party in the Bedford-Stuyvesant neighborhood of Brooklyn and invites a who's who of hip-hop and rap artists to perform. He starts off in his decidedly non-Hollywood Ohio hometown, passing out golden tickets and invites to a few of his luckier neighbors: two goofy young guys he meets on the street, the older ladies who work at the convenience store where he buys cigarettes, a local parole officer, a university marching band. Young, old, black, white ' Chappelle just wants them on the buses he has chartered. In New York, Chappelle restores the bullhorn to its former glory (before Extreme Makeover: Home Edition's Ty Pennington thoroughly and completely ruined it for all of us), sticking one out of the window of his car as he drives the Brooklyn streets and invites everyone within earshot.

All of this prep work is added to rehearsal and interview footage and interspersed with clips of the day's actual performances. The musical line-up is impressive (and fans of his show knew it would be, judging from the musical guests he frequently featured early on): Kanye West, Mos Def, Talib Kweli, Erykah Badu, Jill Scott, Common, The Roots, Dead Prez, Big Daddy Kane, even a reunited Fugees. Chappelle appears on stage every so often, playing emcee (and MC, at one point) and keeping things moving. Mostly, he jumps around and acts like a fan, singing along and, well, having a party.

As far as documentary filmmaking techniques go, Block Party is a bland installment. But it was never really about the film anyway. It's about one of America's boldest, strongest young voices taking artists into an underserved community and rocking the block. Chappelle has paid a personal price for his success, learning all about image and money and expectations and polite prejudice. The man you see at the block party is trying to make something of all that. For his sake ' and ours ' I hope he keeps trying.

First Impressionist
Director Terrence Malick journeys to The New World and stakes his claim once again as a most eccentric ' and artistic ' filmmaker.

Terrence Malick movies are an acquired taste. It's not that they aren't brilliant. And it's not that they aren't beautifully filmed. It's more that Malick movies are gloriously unconstrained by any sense of the conventional, and that can be challenging to even his most loyal viewers. His works are always an odd extension of performance art, some kind of Promethean picture poetry that shrugs off normal narrative and character development in favor of an exploration of essence. Malick is an impressionist ' and perhaps America's finest. The New World is his latest painting.

The Texas native is an inspiring anomaly. He sprang to prominence in the 1970s, making two flat-out masterpieces in the space of five years: 1973's Badlands, a fictional retelling of the Starkweather-Fugate heartland killing spree, and 1978's soft and sad Days of Heaven. He wrote and directed both pictures to great critical and artistic acclaim ' and then vanished from the spotlight as quickly as he had claimed it. He became an enduring myth in a town devoted to disposal ones, a maverick filmmaker who had worked on his own terms in the service of his singular vision. It felt as though this unique voice might be gone ' lost ' forever. And then, inexplicably, he roared back onto the screen in 1993 with the breathtaking, heart-stopping war epic The Thin Red Line. It's the quietest war movie ever made (and possibly the most affecting), but Malick's moving and melancholy ruminations were unfairly overshadowed by the garish showmanship of Steven Spielberg's Saving Private Ryan, which was released the same year. Why bother with a complicated, sprawling film that boasts no single main character when you can have Tom Hanks hamming it up on a special effects-enhanced D-Day?

Malick's anti-commerciality has always been his greatest gift ' and his biggest flaw. He isn't interested in wider audiences; he's just interested in willing ones. The New World is no different. Malick tells the story of Capt. John Smith (Colin Farrell) and Pocahantas (Q'Orianka Kilcher) through a slow and visually dazzling series of set pieces: their first meeting, the day she saves his life, their complicated courtship, their ultimate separation. The backdrop to all of this is the sun and rain and sky of uncharted territory and the stink and fear and madness of a fledgling colony.

Malick wants to submerge his audience in a dizzying, non-dialogue-driven journey into the deep. For a film like The New World to work, you have to be able to set aside a desire for momentum, explanation, finality. A filmmaker this fearless deserves nothing less.