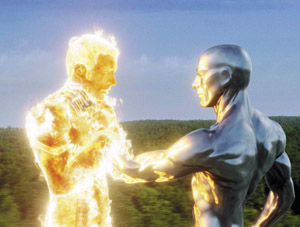 Invisibility girl, flying fire guy, Stretchy Stretcherson, indestructible orange dude. The Fantastic Four movies should not be boring. And yet they really sort of are. Power-related visuals aside, this gang of four has little to offer in the way of excitement, going on two movies now. Can anyone explain how it could be that a quartet of what are quite possibly the blandest people on planet Earth lucked into such spectacular abilities? Because that might be a plot line worth pursuing. More interesting, no doubt, than the rehashed jokes, wedding angst and anticlimactic apocalypse of Fantastic Four: Rise of the Silver Surfer.

It's an indeterminate amount of time since our fantastic friends solidified Victor Von Doom (Julian McMahon) into a metal statue and saved the world ' or at least thought they did (on both counts). The big wedding day approaches for Reed Richards/Mr. Fantastic (Ioan Gruffud) and Sue Storm/Invisible Woman (Jessica Alba), and all the world is watching. All the world, it turns out, except for U.S. Army Gen. Hager (Andre Braugher), who's watching a star show of a different sort: a streaking white light in the skies above earth that opens craters and causes climate changes wherever it appears.

The bad-attitude Army brass comes to the four for help, even though he's no fan of Mr. Fantastic. In public, to placate Sue, Reed declines to be all he can be, determined to stick to the schedule for a wedding that's apparently been postponed four times before. In private, however, his super scientist mind starts working on the problem, building a sensor that will alert authorities whenever the silver streak approaches the area. His secret surfaces, of course, before the dynamic duo can even say their vows. The Silver Surfer, as he is soon dubbed, crashes the rooftop wedding and has a close encounter with Johnny Storm/Human Torch (Chris Evans) that leaves his pyrotechnic powers up for grabs. Literally. Johnny is soon swapping powers with whomever he touches.

While Johnny and Ben Grimm/The Thing (Michael Chiklis) roughhouse around (ha! ha! those boys really need to learn to get along), Reed stays busy figuring out the itinerary of their new metallic friend, discovering that his flybys result in the deaths of worlds. Wherever he goes, eight days later, everything dies. The U.S. Army isn't the only one watching; the decidedly not dead Doom, free with the help of a Latverian welder, tracks the Silver Surfer and has a one-on-one encounter, a singular experience he gloweringly parlays into a place next to the Fantastic Four as they fight to save the planet. So Reed and Sue can get married. And Johnny, embracing the softer side of his sear, can settle down with a good woman. And Ben and Alicia (Kerry Washington) can stop nuzzling in public places and get a room. And, unbeknownst to half the team for only about half a second, the newlyweds can disband the superhero team. And everyone can live normal lives. Yawn. All superheroes have existential crises, but these guys just got the gig, didn't they?

Somewhere between the first movie and Silver Surfer, Sue Storm turned into a Barbie doll. Blonde dye and botox have short-circuited her smarts and her sense of responsibility. All she wants to do is run away to her Malibu beach house with her super-stretch Ken doll, a man so pliable it became his superpower, for crying out loud. She bats her blue-lensed eyes at him, and he folds like a house of cards. Saving the world ' like, you know, math ' is just so hard. Sue and Reed's whole dynamic is annoyingly retro and gapingly unconvincing. What's invisible is any Gruffud/Jessica Alba chemistry. How is that even possible?

Apparently, though, Sue's particular brand of plastic has interplanetary appeal, reminding the Silver Surfer of the one he left behind in a galaxy, far, far away, prompting him to help turn the tide in Earth's favor and to give a gooey speech at the film's finale. It doesn't matter exactly what he says because it comes out sounding dangerously similar to that love-means-never-having-to-say-you're-sorry crap from some cheesy '70s Harvard movie. And nobody needs to hear that stuff ever again.

The effects in Silver Surfer are, thankfully, better than the dialogue. The Silver Surfer is cool to watch, especially when he does his liquidy, shape-shifty thing to pass through buildings and buses. His kamikaze encounter with the Human Torch (spanning New York to D.C. and all the distance in between) would be quite cool to watch, if we hadn't already seen it all in the film's previews about a million times. Still, there are rumors of another installment, and maybe even a Silver Surfer spin-off. Which ' even though he's stoic and largely silent and very shiny ' might at least be more interesting to watch.