Lions for Lambs takes to task the unengaged and the ineffectual for the many failures in the war on terror. 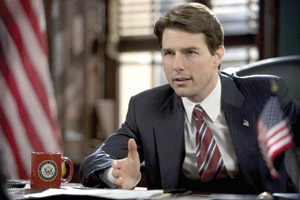 We tend to think about America only as something we don't really have to think about very much. Worse yet, we don't think about it all. We duck scary real-world conundrums, oppressive partisan politics and spin-driven media and bury our heads in the ever-anesthetizing sands of celebritized news, me-centered conspicuous consumption and guilty-pleasure reality TV.

For far too long, too many of us have accepted America as a fait accompli. The Founding Fathers wound that timepiece of New World democracy all those many years ago, and it's taken a licking but kept on ticking, so hooray for us. And yet this ingenious idea that is America is made and remade in a million ways, in a million places, every day. We've just allowed it to become someone else's problem ' and therefore someone else's opportunity.

Subtract the engaged and educated people from government of the people, by the people and for the people, and everything gets out of whack. Witness the power vacuum quickly and expertly filled by moneyed interests, survivalist politicians, propaganda agendas. Witness the world of Lions for Lambs.

Republican on the rise Sen. Jasper Irving (Tom Cruise) has a so-new-it's-as-old-as-the-hills strategy to winning the high ground ' and those ever-elusive hearts and minds ' in Afghanistan. He summons old-school reporter Janine Roth (Meryl Streep), the very journo that once christened him the future of his party, so that he can deliver a bravura performance detailing exactly how his new approach will turn the tide in the war on terror. He bullies her, strokes her ego, dodges her questions in a particularly divalicious inside-the-Beltway dance. Irving's hard sell rattles Roth, who is forced to question her own complicity both in his meteoric status and in the packaging of her pre-war reporting. She returns to the Washington bureau of her corporatized news network to spill her frustration and ire to her ratings-jonesing editor (Kevin Dunn), who sees only an exclusive ' to the exclusion of any of Roth's ethical, contextual considerations.

Meanwhile, California poli-sci professor Stephen Malley (Robert Redford) pulls student Todd Hayes (Andrew Garfield) into his office for an early-morning come-to-Jesus meeting. It's not that Hayes is failing Malley's class; he's falling short of Malley's expectations. In an effort to cattle-prod the privileged Hayes into caring again, the Vietnam vet-turned Chicago protester-turned-educator challenges him with the story of two former students who once gave him hope: Arian Finch (Derek Luke) and Ernest Rodriguez (Michael Pena).

As these cross-continental conversations occur, Finch and Rodriguez, scholarship students who chose to volunteer for Army service after graduation despite Malley's misgivings, fight for their lives on a snowy plateau in Afghanistan ' caught up in Irving's "new" strategy, gone wrong from the get-go.

Lions for Lamb is as ambitious as its show-dog of a senator. Director Redford (A River Runs Through It, Quiz Show) and screenwriter Matthew Michael Carnahan (The Kingdom) want to jumpstart a conversation about our role as individuals in the governments that act in our names, and they are unafraid to get really talky in the process. Talky's not bad; tedious is.

The problem is that Carnahan's caricature characters never truly move beyond stating the obvious. For all Irving's whatever-it-takes-to-win bellicosity, Roth's we-should-have-taken-the-time-to-connect-the-dots contrition and Malley's we-are-fiddling-while-Rome-burns speechifying, Lions for Lambs doesn't deliver a single insight with poetry or power. It's interesting, but never invigorating. Irving's encounter with Roth is increasingly one-sided as he gathers his pitch-perfect patriotic steam, complete with crocodile tears, and the concerned, wise Malley life-lesson lectures Hayes more than if he were standing at the head of a freshman seminar class. But both are only telling us things we mostly already know in ways we've heard too many times before.

That lack of creative spontaneity, of meaningful intellectual movement, creeps from the script into Redford's stodgy staging and sucks the life out of Lambs' high-minded conceit. Which means there's no movie here and even less drama. Cruise and Redford aren't acting; they are sitting behind desks, unburdening themselves of mapped-out monologues. Redford just plays the smart, smug Sundance grandpa he's become. Cruise at least brings a barrel full of that tan, toothy used-car-salesman charm of his to Irving, somehow making his Ken-doll self seem like even harder plastic than usual. But he needed a better back-and-forth with Streep to make sparks fly. Irving should be able to out-talk Roth, but not so obviously out-think her, too. Maybe she did it as a calculated, character-built response to Cruise's character's all-encompassing, all-American bluster or maybe she envisioned it as a metaphoric embodiment of a compass-less media, but Streep plays the supposedly experienced and savvy Roth as distractingly dithering and scattered.

Still, Lions for Lambs deserves some respect for trying something different, straining for current-events relevance and serious-minded solemnity in a medium too rarely used for either. Like Theodore Roosevelt's valiantly striving man in the arena ' and like the nascent citizen activists it seeks to ignite ' Lions gets credit, for failing while daring.