Almost a decade after There's Something About Mary, the Farrelly Brothers try and reclaim the raunch crown. 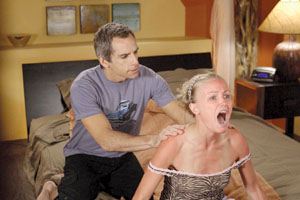 It's been seven years since the Farrelly brothers made their last R-rated raunchy comedy, the mediocre Me, Myself & Irene. Since then, they've been trafficking in hit-and-miss, PG-13 affairs, like the dopey Shallow Hal and the semi-sweet Fever Pitch. They also helmed the embarrassing Stuck On You, which featured Matt Damon and Greg Kinnear as Siamese twins.

In the time since the Farrellys' last sicko hurrah, the likes of Judd Apatow have come along to make R-rated comedy safe for studios again, so the Farrellys are back with The Heartbreak Kid. The film re-teams them with Ben Stiller, star of their comedy classic, There's Something About Mary.

The resultant film feels as if it's straining a bit, as if the Farrellys are desperately trying to reestablish themselves as the Kings of Raunch. There are some big laughs scattered throughout, but also a few that feel like a tad bit too much. It's definitely their funniest film since Mary but, due to its inconsistencies, doesn't reside in the same class as that film.

This is a loose remake of the Elaine May 1972 movie, based on a script by Neil Simon and starring Charles Grodin. Stiller plays Eddie, an unsettled 40-year-old commitment-phobe who can't catch a "love" break. He meets Lila (Malin Akerman) on the streets of San Francisco. She's perfect in every way: intelligent, beautiful, and sophisticated. They immediately hit it off, and when they're faced with being separated, he pops the question and rushes into marriage. The lesson of this movie: Always go on a road trip before you marry somebody.

The couple head to Cabo for their honeymoon and Lila reveals herself as a devil woman. She has no job, a shrill singing voice, a relatively low level of intelligence and major issues in the bedroom. Things are further complicated when Eddie meets Miranda (Michelle Monaghan) and quickly falls in love.

Some of the gross-out humor works just fine. Stiller and Akerman share a couple of sex scenes that definitely count as some of the funniest in years; one particular moment culminates in bathroom humor that had me laughing out loud. Jerry Stiller is funny as Eddie's disgusting father, and there are a couple of moments with a donkey that are memorable.

The Farrellys manage to push things a little too far sometimes, a problem that plagued Me, Myself & Irene. Their shocking sight gags might result in laughter, but it's that strain of uncomfortable, unsure laughter. A visual gag involving Lila's nether regions is just not funny, an unsuccessful attempt to top that famous sperm hairdo from Mary.

Even with its problems, it's good to see Ben Stiller taking some risks again. He plays an unsavory character here, a far cry from the family friendly Stiller seen in Night at the Museum and Meet the Fockers. Stiller excels with outlandishly adult material that calls upon his talents as a physical comedian. One of the movie's funnier passages involves a disheveled Eddie trying to make it back into the USA and having trouble with immigration officers.

Akerman is a gifted comic actress. Her performance and appearance are drawing comparisons to Cameron Diaz, but I really don't see it. She's her own, unabashed comedic force in the film. Monaghan's role calls for her to be charming and little more. She manages that with grace.

The movie didn't do well in its opening weekend, a surprise considering the talent involved. Stiller and the Farrellys prove, once again, to be an entertaining combo. The Heartbreak Kid might be an uneven effort, but it gets its fair share of laughs, and allows the talented Stiller to come a bit unhinged. Let's hope he pursues that trend in his next projects.