The highly anticipated New Belgium Brewery beers will be here soon, and IND Monthly had a preview.

Schilling Distributing, to which we all owe thanks for bringing New Belgium to Acadiana, held a launch party Tuesday night for the Fort Collins, Colo., brewery's debut in the area with plenty of libations to go around.

Upon entering, each attendee was given a New Belgium beer glass and sent on their way to try the five different brews available that night: Sunshine Wheat, Trippel Belgian style ale, Ranger IPA, Shift and, of course, Fat Tire.

The Sunshine Wheat is ideal for summer sipping - it's lighter than most hefeweizens and doesn't require a fresh citrus addition, as is customary with other wheat beers. The coriander smell and taste is apparent, but not overwhelming, and it still maintains a light citrus taste, which is a refreshing addition. Don's Seafood Hut provided food, and the shrimp pasta was recommended to pair with the Sunshine Wheat, while the gumbo and étouffée were recommended for the other, darker beers. 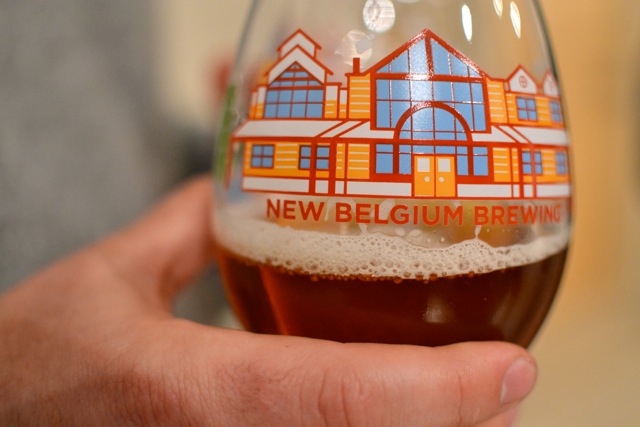 Brewed with a specific Belgian strain of yeast, the Trippel is the strongest beer at 7.8 ABV with the longest fermentation process. It's spiced with coriander with a hoppy taste. The Ranger IPA also hits you with hops like a ton of bricks, which is to be expected both from the name and the hops pictured on the bottle label. The three types of hops, Cascade, Chinook and Simcoe, provide the citrus, floral and fruity tastes, respectively, with another dose of Cascade for an even more intense hop flavor.

At New Belgium, each worker is rewarded at the end of the work day with a shared, end-of-shift beer, which is the namesake for the brewery's pale lager, Shift. The first aroma that hits you is grapefruit, which is apparent in the taste, as well. It has a slight honey taste and is very easy to drink, making it another great choice for the coming summer months.

Last but certainly not least was the Fat Tire amber ale. The bottles, when they hit shelves, will have a special "Biking into the Bayou State" commemorative label, though they won't stay on shelves for long. The amber ale has "toasty, biscuit-like malt flavors coasting in equilibrium with hoppy freshness," according to the brewery, and it's well suited for any occasion.

Schilling says it's working to have the 22-oz. bombers at Festival International, so keep an eye out there. Bottles should be available soon, and draught will be here in May.